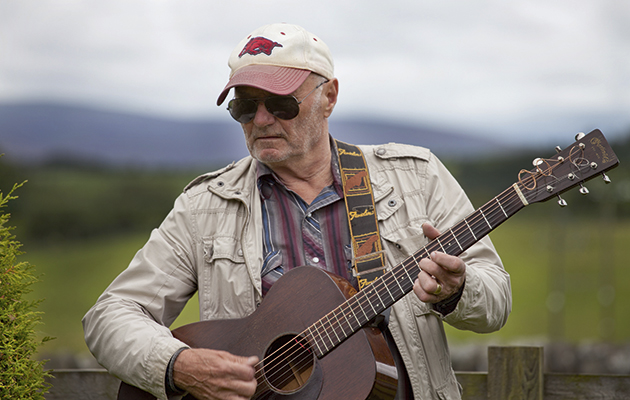 Scuttling down a pothole-scarred approximation of Chris Rea’s “Road To Hell” on the apocalyptic “Sometimes You Just Drive”, Yorkshire guitar maven Michael Chapman keeps returning to the same refrain: “I’m still waiting, waiting on my reward.” In a 50-year career that has brought little in terms of tangible success, this album may be it.

Chapman turns 76 on January 24 having almost managed – following a transatlantic Mexican stand-off lasting several decades – to break America. Reinvented as an improv guitar maestro following collisions with Thurston Moore and the No Neck Blues Band, his glowering gifts as a songwriter now find sympathetic echoes in the works of Bill Callahan, Ryley Walker, Hiss Golden Messenger and Kurt Vile. All of a sudden – and for the first time – he has a US label, with sometime Vile sideman Steve Gunn having assembled a young(ish) band to make 50, a resetting of a cluster of jewels from the second half of Chapman’s career with a clutch of new songs thrown in. Vindication here we come.

Lush and lively, 50 features Nathan Bowles’ chuckling banjos, a “railroad line”, a levee, a preacher and hobos, but the language of the blues – lovingly cribbed from Forces radio and long-lost vinyl – is one Chapman speaks with an unmistakably English accent. 50 reeks of rain-sodden Hunslet, fish-stinking Hull and wind-lashed Northumberland; it comes from – as Chapman puts it in “Winter In Memphis” – “beyond the edge of nowhere”, the only place he has ever felt musically comfortable.

A confessional songwriter who doesn’t really do personal detail; a John Fahey-spangled steel-string guitarist who sounds better plugged in; a folkie who doesn’t really like folk music – the former Leeds art student has fallen sullenly between a good few stools in his time. A latecomer to music after teaching art and photography, he was 28 (a year older than Paul McCartney, two years older than Bert Jansch) by the time his 1969 debut, Rainmaker, was released. He never moved to London (“I’m a Yorkshireman – I don’t waste money,” he told one interviewer), a reluctance to fit in that might explain why his most bankable musical foil, guitarist Mick Ronson, left him so readily for David Bowie. Soon afterwards, Chapman abandoned the bright lights of Humberside for an unheated farmhouse in the Hadrian’s Wall borderlands, where a trip into town means the fleshpots of Brampton. The hobbies that have sustained him during his lengthy exile? “Music, books and logging.”

However, while there are hacksaw marks here and there, 50 is a finely turned piece that surveys the looming thunderclouds of mortality and the biblical gloom of the times, and – quietly, unshowily – transcends both.
He hovers between duplicitous life and ignoble death on Bob Dylan-ish opener “A Spanish Incident (Ramón And Durango)”, his car being repaired by shifty mechanics as he prepares for a long journey across barren country, and lapses into fever delirium on “Sometimes You Just Drive”. An end-of-days riff inspired by the flood-ravaged streets of Carlisle post-Storm Desmond, his hot-headed visions (“Trees caught fire, skies turned red”) are cooled somewhat by feedback fog, sensitive percussion and an icy backing-vocal blast from Anglo-Nico Bridget St John.

Minor-chord gaunt, “Winter In Memphis” is darker still. Propelled by an ominous, foot-stomping rhythm, the John Cale-ophone Chapman goes all Deliverance as he warns: “Never go into the darkness, never, never leave my sight/There are just too many crazies and you can die just beyond the light.”

“The Mallard”, meanwhile, wistfully equates the fate of the mid-20th century’s star steam train with that of life and love, with a Prefab Sprout-ish twinkle from Gunn. Chapman gets the feeling he too is being shunted into life’s sidings on autumnal Nick Drake throb “Falling From Grace”, confessing in a voice like a battered suitcase: “I’m beginning to feel like that man in the park who can make the kids cry and the dogs start to bark/He’s lonely by day and no better by night.” However, he has not run out of steam, or hope.

CD and download buyers get two extra tracks – discursive instrumental doodle “Rosh Pina” and a sombre reworking of “Navigation” – but “Money Trouble” and “That Time Of Night” are 50’s proper closing salvo. The former celebrates the quiet victory of frugal survival with a loose, Band-style hoedown, while the latter – a third-age upgrade of Eric Clapton’s grisly “Wonderful Tonight” – finds wee-small-hours anxieties magically dispelled by love’s redeeming wonder. “We have left behind places others never get to,” the eternally husky Chapman drawls, the downhill trudge of declining years reimagined as a stately victory parade.

And that’s 50 in its essence. A lifetime ago, Chapman lamented “time passed and time passing” on John Peel fave “Postcards Of Scarborough”, sounding like a man with a long way to go. Suddenly in tune with his times, he sounds as if his ill-defined destination is finally in sight. “I love it when you want me,” he slurs on “That Time Of Night”. In this light, who wouldn’t?