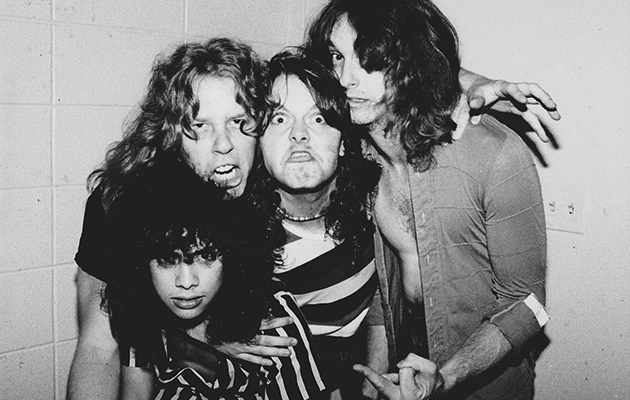 Among major acts, Metallica seem late to the game of releasing ridiculously overstuffed editions of canonic albums. To be fair, though, they did anticipate the current deluge with 1993’s Live Shit: Binge And Purge, an exhaustive set that came packaged in a facsimile flight case and really should have come with its own roadie. Fans can now fill their man caves with these deluxe editions of the band’s first two albums: Kill Em All contains four vinyl records – a remaster of the 1983 original, a double live LP recorded in Paris in 1984 and a three-track “Jump In The Fire” picture disc – plus three more CDs with radio interviews, rough mixes, rarities and further live and archival finds. They’re accompanied by a DVD of two more 1983 gigs, books of photos and lyrics, and a patch for your favourite denim vest. Ride The Lightning – which draws its trove of live material from six shows, including the band’s Donington debut in 1985 – now sprawls over four LPs, six CDs and one DVD, plus books and posters.

Such lavish displays of generosity may seem absurd to middle-aged headbangers who spent their adolescence wearing out their cassette versions on crappy car stereos and worse Walkmans. But even the doubters will be impressed with the remastering work on songs that didn’t need to sound so grotty to set new standards for speed and power.

Recorded just weeks after the band replaced Dave Mustaine with Kirk Hammett, Kill Em All would change the shape of things to come with its exhilarating fusion of American hardcore and British heavy metal at its most bruising. Three decades later, it may be hard to hear Metallica with undamaged ears but the full-throttle thrash of “Whiplash” remains revelatory – here is where Metallica finds the unholy nexus of Black Flag and Venom.

Released in 1984, Ride The Lightning is topped only by 1986’s Master Of Puppets in the estimation of those who believe the band’s wider ambitions would soon get the better of them. Of course, the album also features their first quasi-ballad in “Fade To Black” and their earliest nine-minute epic in “The Call Of Ktulu”. But all the songs here display the firepower, dexterity and drive to innovate that prevailed before “Enter Sandman” introduced a more broad-strokes variety of bombast.

Nor do these songs’ lowest-fidelity live renditions – with the Donington recordings being spectacularly sludgy – dull the impact of early masterstrokes like “Jump In The Fire” and “Am I Evil?”. Indeed, since they more accurately approximate the experience of hearing the originals on a C90 covered in sloppily drawn devil signs, they may actually enhance the songs’ fundamental awesomeness.