Where the Prince Of Soul comes of age 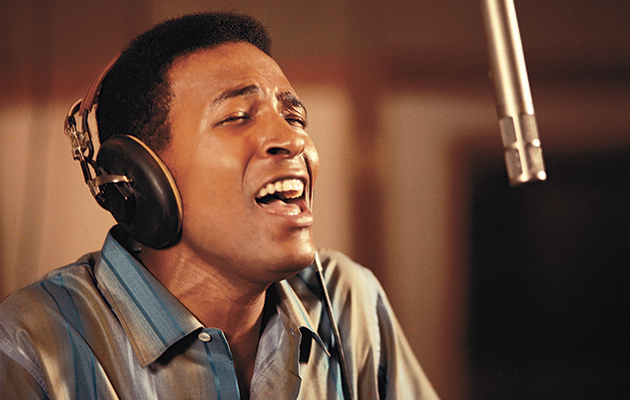 One night in 1971, Marvin Gaye called Berry Gordy at his vacation home in the Bahamas and told him he was planning to make a protest album. “With the world exploding around me, how am I supposed to keep singing love songs?” he reportedly told Motown’s founder and owner, who also happened to be his brother-in-law.

Gordy told him he was being “ridiculous” and suggested he should stick to making hit singles with a dance beat. But Gaye knew that the world was changing and that with the onset of the 1970s, Motown’s bright and breezy claim to be “the sound of young America” was an increasingly hollow slogan.

The result was What’s Going On, and you only had to look at the cover to realise that this was not your routine Motown cash-in album of hit-single-plus- filler. Instead of the label’s habitually shoddy sleeves that looked as if they had been designed to go straight to the cut-out bin, the record bore a striking, high-calibre image of Gaye, black leather trench coat turned up against the sleet, his eyes full of a steely determination that evoked the spirit of Martin Luther King.

In what was a Motown breakthrough, the lyrics were printed within the gatefold cover like a “serious” rock album. The nine songs dealt with war, peace, politics, racial identity and personal salvation, reflecting Gaye’s rapidly changing world view. Influenced variously by black power and the civil rights movement (which Motown had spent the 1960s trying to ignore), the death from a malignant brain tumour of his duetting partner Tammi Terrell (who had collapsed in his arms on stage) and the letters home he was receiving from his brother Frankie in Vietnam, this was a new kind of conscious soul music.

As the late American writer Ben Edmonds noted in his monograph Marvin Gaye And The Last Days of The Motown Sound, when Gaye sang “what’s going on?” it was to black music what Dylan’s “how does it feel?” had been to rock music half-a-decade earlier: not so much a question as a declaration that nothing would ever be the same again

What’s Going On opens this seven-disc box set, covering the decade 1971-81, the third instalment in a collected works project in which each volume has captured a singular and distinctive era in the evolution of Gaye’s career. The first, covering the years 1961-65, tracked his transition from jazzy, Nat King Cole-influenced crooner to imperious, sweet soul man. Volume two, spanning 1966-70, peaked with the majesty of “I Heard It Through The Grapevine” and marked the end of an era with That’s The Way Love Is, his final Motown “assembly-line” album. But it’s the third volume that contains the dope, and illustrates how, once Gaye had become the first Motown artist to be granted autonomous creative control, he changed the trajectory of black music.

What’s Going On was followed by the soundtrack to the 1972 blaxploitation movie Trouble Man, a statement of intent designed to put Gaye alongside Isaac Hayes (Shaft) and Curtis Mayfield (Superfly) as a serious composer and arranger. Mostly instrumental and heavily dominated by sax and Gaye’s own Moog noodlings, its cool and sensual jazz soundscapes are unlike anything else in his canon, but represents some of his most brilliant and surprising music-making and was an unlikely influence on the jazz excursions on which Joni Mitchell was about to embark.

In retrospect Trouble Ma sits neatly as a bridge spanning the social conscience of What’s Going On and the brazen carnality of 1973’s Let’s Get It On, the biggest-selling album of Gaye’s career on which he turned sexuality into a spiritual quest and invented boudoir soul and which hardly needs further eulogising here.

By way of contrast, 1973’s Diana & Marvin – actually recoded before Let’s Get It On – was a throwback to his 1960s duets with Mary Wells, Kim Weston and Tammi Terrell. Despite having vowed never to take another singing partner after Terrell’s death, he was flattered and cajoled into the collaboration with Diana Ross, but its recording was a joyless experience. Gaye believed that he sang better when he relaxed by smoking a joint in the studio, and the sessions hit the wall when his duetting partner threw a tantrum in protest. According to Motown’s chief engineer Russ Terrana, when Berry Gordy intervened and told Gaye that Ross couldn’t be in the studio with him if he was smoking because she was pregnant, he responded by saying, “Then I can’t sing.”

The only solution was for them to record separately. “There was not a single moment when they actually sang together”, according to Terrana, who was tasked with splicing their voices together. Gaye’s best moment on the record come in a storming version of Wilson Pickett’s “Don’t Knock My Love”, which Ross apparently hated. But the inclusion of covers of two Stylistics hits illustrated how Motown, having abandoned Detroit for Los Angeles, was no longer leading but was now following. At least Gaye was honest enough subsequently to admit that his behaviour towards Ross had been less than gallant. “We were like two spoiled kids going after the same cookie,” he confessed.

On 1976’s I Want You he reprised the eroticism of Let’s Get it On and a case can be made that its quiet storm of mellow dynamics, orgasmic melodies and rhythmic complexity elevates bedroom funk to an even greater climax. Although the songs were mostly written by producer Leon Ware, Gaye took ownership and turned them into a gorgeous, simmering symphony of hormonal desire for the new nubile teenage love in his life. It was the yin to the yang of 1978’s Here, My Dear which picked at the scabs of his failed marriage to Anna Gordy on a set imbued with a cathartic intensity and a musical sophistication that was criminally under-appreciated at the time.

By the time of 1981’s In Our Lifetime, Gaye’s life had descended into chaos. He’d lost much of his audience, was heavily mired in addiction, deep in debt to the IRS and his second marriage had hit the rocks. After attempting suicide by ingesting an entire ounce of cocaine (“I just wanted to be left alone and blow my brains on high-octane toot. It would be a slow but relatively pleasant death, certainly less messy than a gun”), he junked an album titled Love Man – a tired attempt to repeat the formula of Let’s Get It On/I Want You for which Motown had already printed 450,000 copies of the sleeve – and fled to London, where he refashioned the material while getting out of his gourd on freebase.

His ambition was twofold: to reconnect with the mainstream and to record something more substantial than another bump-and-grind set, which joined “songs from wisdom and songs from Satan” with “songs from lust”, as he put it on “Life Is for Learning”, one of the album’s better tracks. Sadly his problems were too crushing for him to succeed. Gaye’s biographer David Ritz described the album as the sound of “a man at personal war with himself” and as such it has an undeniable pathological fascination. But as a portrait of an artist in mental turmoil and desperately trying to keep up with the likes of Michael Jackson, there’s no denying that it was a sad end to a 20-year Motown career which had taken him to the rarest heights.