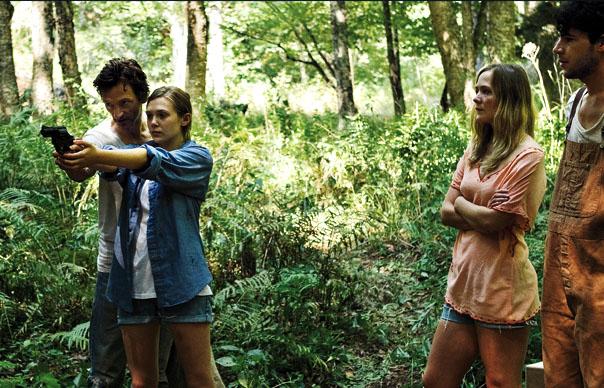 The first time we see Martha (Elizabeth Olsen), she’s slipping out of a ranch house, nestled deep in some isolated rural idyll, and bolting for the cover of nearby woods. Fetching up in a nearby town, she phones her sister – but when asked, she’s confused as to her whereabouts and, later, is unable to account for where she’s been the last two years.

Martha, we learn, is on the run from a cult, presided over by charismatic leader, Patrick (John Hawkes). It was Patrick who gave Martha the name Marcy May, as part of a process in breaking down her identity. Marlene, meanwhile, is the name all the woman in the cult are instructed to use when answering the telephone. All this we discover in flashback: the film slips seamlessly between timelines, from the present day, following Martha’s escape from the cult, as she recouperates in the care of her yuppie-ish elder sister Lucy (Sarah Paulson) and brother-in-law Ted (Hugh Dancy), to her grueling time spent in Patrick’s tyrannical household.

This is the feature debut of writer/director Sean Durkin, a follow-up to his 2010 short film, Mary Last Seen, which similarly found a young woman caught up in the pernicious influence of a controlling male. Durkin delivers an accomplished, disturbing movie, that at times feels like a horror movie: the idea of a female lead trapped in a remote environment and threatened by a predatory male echoes films from Psycho to The Texas Chainsaw Massacre and The Girl Who Kicked The Hornet’s Nest. Elizabeth Olsen, the younger sister of the twins, brings to the part of Martha a measured intelligence and fierce vulnerability. John Hawkes – so good as the demonic Teardrop in Winter’s Bone – is tremendous as Patrick. He bestows or withholds his favour, gaining psychological hold over his followers. The new members – predominantly fragile young women, like Martha, who drift into his orbit – outdo each other to prove how fully they have accepted his ideology (which includes rape). Brady Corbet – clean cut, cold-eyed and gently menacing – is a suitably reptilian second in command, Watts.

Martha might have escaped the physical boundaries of the cult’s ranch, but emotionally she is still very much a prisoner there. Recouperating at her sister’s home, Martha broods, lashing out at anyone who tries to help her. There is something of a wounded wild animal about her. Whether or not the cult still pose a genuine threat to her or not is a moot point – we are never expressly told as much, though Martha is convinced they do. She is spooked at the slightest noise, or the sight of an unfamiliar car, convinced Patrick or Watts are coming for her. “Fear is the most amazing emotion of all,” Patrick tutors Martha. It’s a lesson she never forgets.
Wendy Ide