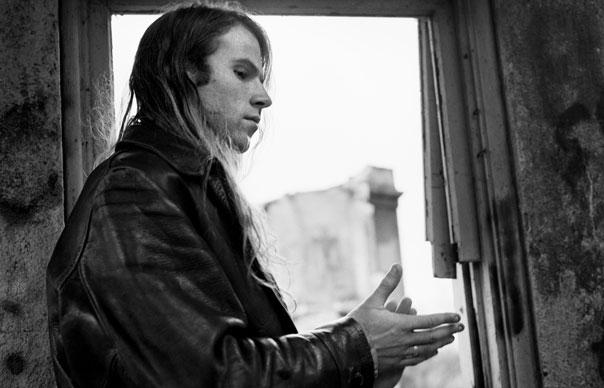 It can be hard to remember at times, but in the early 1990s, Mark Lanegan was one of grunge’s secret treasures. This came about more through happenstance than any conscious planning: his group at the time, The Screaming Trees, had spent the 1980s recording a series of low-rent, seductively psychedelic rock records for indie SST, before signing to a major and delivering their defining moment, 1992’s hard-won Sweet Oblivion, just in time for grunge to sweep the album away in its midst. Which is all well and good, but by this stage, Lanegan already had his first solo album under his belt, 1990’s The Winding Sheet, and listening back to its languorous, drifting blues and folk songs, you can already hear that this, more than some rock group, was where Lanegan should be.

Though his songs were routinely gorgeous, and the playing was pitch-perfect and unassuming, The Winding Sheet, and its 1994 sequel, Whiskey For The Holy Ghost, were most important for freeing the Lanegan larynx from the tyranny of rock’n’roll volume. It’d be trite to call him ‘one of his generation’s greatest voices’ if it wasn’t so obviously, undeniably true. It’s a voice of astonishing grain, singing out somewhere between a graveled growl and the sweetest of croons, a voice almost unique in its capacity to caress the very base matter of language: vowels soar and consonants crumble to dust when Lanegan delivers his lines. It’s a voice that startles, time and time again, through Has God Seen My Shadow?, a beautiful set of songs drawn from the batch of solo albums that Lanegan released, slowly, during the nineties and noughties.

The Winding Sheet is only represented by two songs, the acoustic lament of “Wild Flowers” and the slow prowl of “Mockingbirds”. The latter in particular sets the tone for much of what Lanegan would subsequently do – an acoustic guitar strums slack and loose while a primal, stealthy electric guitar riff scratches over the top, the song’s drama punctuated by tolling piano, while Lanegan sings out the eschatological blues: “the sun comes out and falls away… Two mockingbirds making sense of it.” Has God Seen My Shadow? is compiled, roughly, in a backwards chronology, so these songs come near the end of the collection; the front is headed up with songs pulled from later albums, like 2004’s Bubblegum and 2001’s Field Songs.

These latter albums are more finessed: the production is richer, the playing stronger, the voice more mature, measured. They lack nothing for these developments, as Lanegan is canny enough a singer and writer to know when to embrace forward movement, and when to return to roots, as he does through some of the covers he chooses: on the first disc of Has God Seen My Shadow?, he takes on Tim Hardin’s “Shiloh Town” and does it justice, finding new stresses and nuances in the original. He’s also supported throughout by an excellent cast of players, including Josh Homme and Chris Goss from the Queens Of The Stone Age family, J Mascis of Dinosaur Jr, Tad, Ben Shepherd of Soundgarden, and Mike Johnson, an ex-Dinosaur Jr member who for many years was Lanegan’s right-hand man, a sussed operator with an almost preternatural knack for sympathetic, understated arrangements.

Indeed, Lanegan’s solo albums are great examples of arrangement placed in service to song, but without recourse to the blandishments of the ‘tasteful’. There’s always an edge in these performances: often it comes through Lanegan’s voice, sometimes his collaborators, such as the cold chill of PJ Harvey’s guest vocals on “Come To Me”. Collaboration’s become more important to Lanegan over time, and if Has God Seen My Shadow? is missing anything, it’s some of his great performances from his duo albums with Isobel Campbell, or from Saturnalia, his lone album with Greg Dulli (Afghan Whigs) as The Gutter Twins. But as a representative trawl through Lanegan’s solo albums, Has God Seen My Shadow? gets it very right indeed.

EXTRAS: A second disc of unreleased songs, including a hilarious, slowly collapsing live cover of Jackson C. Frank’s “Blues Run The Game”, and a lovely booklet with rare photos and lyrics. 8/10
Jon Dale

Q&A
Why the compilation at this point in time? A necessary gathering up of the threads of the past?
The compilation idea was brought to me by the guys at Light In The Attic, who I think do really cool work. Until then the idea had never occurred to me.

What was the motivation behind the particular selections – was there a kind of ‘continuum’ you were looking to emphasise?
Most of those [selections] were [Light In The Attic’s] choices and outside of a couple [of] changes, I’m pretty sure [there were] only a couple tunes I specifically wanted on it. Actually, it was really more that there were a few tunes I just didn’t want on it.

There’s no Screaming Trees material on the compilation. I was wondering how you think the story might be told ‘differently’ if some of those songs were included…
I think of my work under my own name as completely separate from what I did in Screaming Trees and there are many, many reasons for that. There have already been something like three or more Trees anthologies and that, in my mind, is way more than enough. I would actually be horrified if someone were to try and force both things together in one collection. It would totally gross me out.
INTERVIEW: JON DALE