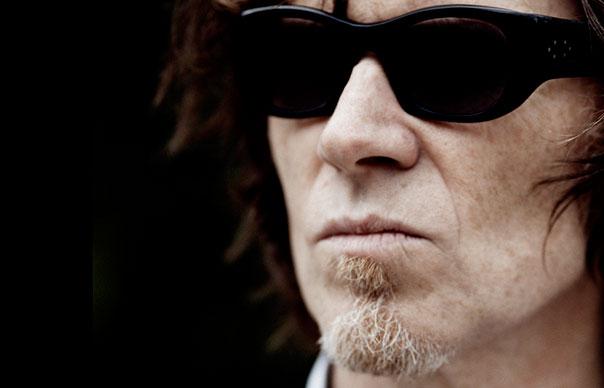 Mark Lanegan, it would appear, has not been someone for the hugely productive life, which feels admirable in these split-second days of cultural overkill. He’s someone who tills the ground slowly, folding his songs carefully into their shadow worlds, each penumbral melody carefully arranged and sung with just the right gravitas. But the past few years have seen an unexpected upping of the pace – 2012’s Blues Funeral, last year’s covers album, Imitations, and recent collaborations with Duke Garwood. Phantom Radio, though, feels like Lanegan upping his game yet again: it’s a beautiful set of songs that balances Lanegan’s ongoing interest in blues and folk with further explorations of the new terrain he started to sketch out, sometimes startlingly, with Blues Funeral songs like “The Gravedigger’s Song”.

Indeed, part of what makes Phantom Radio so arresting is Lanegan’s approach to electronics. As he explains further elsewhere, many of the songs here were initially demoed on the Funkbox app, and many of those preset sounds are echoed in the final arrangements on the album. Somehow, though, Lanegan manages to make programmed drums, simple electronics, washes of synth come across as rustic, as though formed and carved from the very Earth. Perhaps it’s in the tension between the electronics and Lanegan’s weathered voice, which is in fine form on Phantom Radio, at times possessing, or possessed by, the material entirely, at other times shading the contours of the melodies spectrally.

The descending guitar figure that opens “Harvest Home” spirals the listener directly into the guts of a song whose lyrics work through the thematic of cause and effect, of the dialectic of life, that moves through Phantom Radio – “I reap, I sow, my harvest, my home”. From there, “Judgement Time” immediately drops to a sad, low, churchy tenor, with a humming harmonium repeatedly cratered by simply strummed acoustic guitar, each downward stroke a rupture of the song’s fabric, while Lanegan sighs, bleary and wraith-like, “I was blistered, just a strung-out angel”. For all their subtlety, “Harvest Home” and “Judgement Time” are seductive openers, a double-tease that immerses Phantom Radio in the plaint of the blues – just look at those song titles.

This makes the glistening arpeggios that open “The Floor Of The Ocean” all the more striking, particularly as they’re immediately pulled under by funereal synth drones – and here’s where we start to glimpse the ’80s post-punk influence that Lanegan has talked about when explaining Phantom Radio’s architecture. A beautiful, cavernous song, “The Floor Of The Ocean” could be pulled from New Order’s Movement, particularly when the Bernard Sumner-esque single note guitar line snakes from the song’s depths; elsewhere, there are hints of Echo & The Bunnymen in the grey-coat hypnotism of the rhythms, or the thick strokes of electronics that Lanegan often paints his songs in.

From there, it gets weirder, and even better. “Seventh Day” allows you, for one moment, to imagine what might have happened if Lanegan had been locked in the Paisley Park Studio for 24 hours – clanking rhythms and slippery wah-wah guitar bring the home-studio funk to Phantom Radio, before they’re again dosed by humming, fuzzing electronics. But soon, Lanegan turns back to more familiar climes, with “I Am The Wolf”’s loner, minimalist drama, a simple acoustic guitar shadowed by reverbed-out string noise; and then to the album’s highlight, the perfectly downcast pop of “Torn Red Heaven”, which opens with lines that are pulled from any sixth-former’s poetry chapbook (“you don’t love me/what’s to love anyway”) made somehow grand and eloquent by an arrangement that slowly draws the curtains on Phil Spector’s girl group era, bathing the room in a starlit glow, oddly reminiscent, of all things, of Beach House at their most transcendent.

After this, “Wild People”’s recourse to Whiskey For The Holy Ghost-esque acoustic blues feels a little like a retroactive gesture, though it’s hard to deny the strength and beauty of both song and performance. But by this stage, Lanegan’s pitched Phantom Radio to plenty of fabulous, unexpected places. Anyone who’s followed his career won’t be surprised by this move – after all, he’s incorporated electronics before, most notably on Blues Funeral – but he’s rarely done it with the elegance and craft of these ten jewel-like songs.
Jon Dale

Q&A
What do you see as the connections, the overarching themes that run through and ultimately bind these songs?
Listening to it just now, I feel like there’s a sort of melancholy that runs through the whole record, not sure why that is or where it comes from. I also think there’s a great deal of beauty to it as well.

You used an app to demo material. It’s fascinating to think that the humble phone app has allowed for a kinda similar intimacy to what musicians used to get with Portastudios…
Yeah, I used the funk box vintage drum machine app to demo some of these tunes and I’m pretty sure a lot of the sounds we used on the record were informed by the demo process. Most of the same tools and instruments used for demoing also appear on the finished thing.

You’ve mentioned that “Torn Red Heart” is a particularly moving song for you. Can you tell me about the sessions for that song in particular, how it came together, your response when you heard it back?
I like that song because it’s ultra simple and direct, it’s the type of song I love when someone else is doing it. It came together really quickly; producer Alain Johannes sang a great harmony vocal and my friend Brett Netson of Built To Spill and Caustic Resin did the killer guitar part at the end of the song.
INTERVIEW: JON DALE