Marianne Faithfull – Give My Love To London

Recuperating from serious injury, the veteran chanteuse puts her back into one of her most personal records... 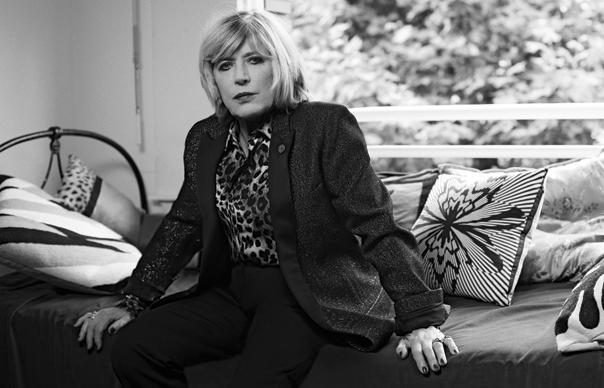 Recuperating from serious injury, the veteran chanteuse puts her back into one of her most personal records…

The introductory verse to the opening title track on Marianne Faithfull’s first album in three years suggests a misty-eyed romanticism, a valentine to the city the now Paris-based singer called home for so many of her 67 years. Co-writer Steve Earle, who previously glamorised London on his own GI yarn “Johnny Come Lately”, fashions a bouncy, country rhythm, while Marianne sings about dancing along Piccadilly in the moonlight.

It’s not long, though, before the narrative takes a cynical turn (“I’ll visit all the places/I used to know so well/From Maida Vale to Chelsea/Paradise to Hell”), and the lunar glow gives way to streets lit by the fires of a riot. What starts as loose autobiography becomes a broader, less historical portrait of how Faithfull views the city, setting the tone for a record that checks in on touchstones from the past but more often than not casts a critical eye over the world as a whole.

Earle is just one of several high-profile collaborators, and Faithfull finds another kindred spirit in Pink Floyd’s Roger Waters, whose “Sparrows Will Sing” ponders what a child might think of the damaged planet he’ll inherit from the previous generation as he “tries to decipher the whole of this unholy mess”. It’s a gentle, despairing scenario, but there’s a full-on rage to “Mother Wolf”, co-written with Patrick Leonard, railing against the lies and duplicity of warmongering world leaders (“The words that come out of your mouth disgust me/The thoughts in your heart sicken me”).

Were we to ignore the words, the overriding “feel” of the melodies isn’t especially far removed from the polite theatricality of Faithfull’s last outing, 2011’s Horses And High Heels, but here Faithfull is at her most lyrically caustic since the pivotal Broken English in 1979. Even the love songs have a sinister edge; the lachrymose “Falling Back” (with Anna Calvi) questions past missteps, and “Love More Or Less” (with Tom McRae) picks over the bones of a current but ultimately doomed romance.

But the most striking chapter in this most personal collection of musings is one of two songs contributed by Nick Cave, with whom Faithfull first worked on 2005’s Before The Poison. “Late Victorian Holocaust” is a spectral ballad about drug addiction that draws on his own and Marianne’s (separate) heroin experiences, but paints a picture of the two of them walking hand-in-hand through a London that alternates between bliss and nightmare.

At a stretch, the song could be read as a companion piece to Lou Reed’s “Perfect Day”, its delicate travelogue finding the protagonists awestruck: “We were star babies in the dark/Throwing up in Meanwhile Park/Then sleeping in each other’s arms/Beyond happy we were, beyond harm.” There’s no doubt that Cave could despatch a handy version of it himself, but he’s clearly tailored the lyric and its London-centric imagery for Faithfull’s defiantly dramatic but fatalistic cracked voice.

Much of the album took shape last year following a back injury that kept Faithfull housebound for the best part of six months, time during which she was able to focus her thoughts and prepare a collection she was determined would rely less on covers than previous releases. Nevertheless, her formidable interpretive skills get a workout on three tracks, including a straight-ahead reading of The Everly Brothers’ “The Price Of Love” and a smoky drawl through Hoagy Carmichael’s “I Get Along Without You Very Well”.
Both fit the sombre template of the original songs, while the third cover, Leonard Cohen’s “Going Home” is – paradoxically, perhaps, considering its author – the album’s frothiest, wittiest component. There’s a sly grin to Faithfull’s vocal, the sense that she’s allowing herself a private joke amidst the anger and angst which makes up the rest of the album. Marianne’s back on her feet these days, fully recovered, and while reminding us that love is pain doesn’t entirely neglect the funny bone.
TERRY STAUNTON

Q&A
How did you injure yourself last year?
I was in LA, got up in the middle of night and fell backwards, breaking my sacrum bone in four places. I was laid up for quite a while, and it gave me a lot of time to write – well, to think. I didn’t do much writing but I thought really carefully about what I wanted to do on this record. What do I believe in? What’s really important to me? What do I like and what don’t I like?

There seems to be lot of anger on the record.
Well, I think anger is good, it’s a very creative energy. It drives me to get things done, and is not nearly as negative as envy or some other emotions. I was determined to do as few covers as possible, and thankfully I had a lot of time to work on my own words because I wasn’t able to do much else. It’s the most personal album I’ve ever made.

Did your ongoing relationship with Nick Cave begin by the two of you bonding over your histories of addiction?
Not at all! It was a love of, and shared tastes in, music that brought us together. But he could only have written “Late Victorian Holocaust” for me – who else could sing it?! I think it’s a masterpiece, it imagines us doing drugs together, which we never did, and it describes a very London junkie scenario. It was never like New York where you’re waiting for the man; in London you were running after him.
INTERVIEWED BY TERRY STAUNTON