The Man Who Fell To Earth 40th Anniversary Collectors Edition

Loving the alien in hi-def 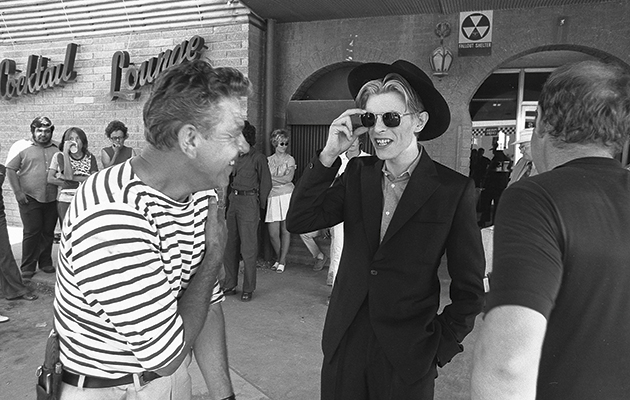 They don’t make them like this anymore, and they didn’t back then, either. As the years go by, Nic Roeg’s splintered sci-fi classic – about a melancholy alien who comes crashing to Earth looking for water; but about other things, too, about the passing time, lost chances, loneliness and corruption, about how America works and looks, and about David Bowie – keeps pace with us both because it’s so much of its time and so utterly unlike anything else in 1976.

Like its protagonist, it never seems to grow old. Four decades on, it comes into new focus again, in light of Bowie’s death, and the fact that it helped feed his great final burst of creativity, the semi-sequel musical Lazarus, and the songs that span-off to form Blackstar.

The film has been repackaged several times, so fans will be most curious about what’s new in this edition…

EXTRAS: The big draw is the gorgeous new 4K restoration, approved by cinematographer Anthony Richmond, a sensitive job that respects the source. There have been restorations before, but the movie never looked better or richer, yet still feels like a 1970s film.

From here, Bowie fans will head straight for the teasingly titled, 16-minute “The Lost Soundtracks” featurette. Cool your jets. It doesn’t contain anything of Bowie’s fabled aborted soundtrack. But his collaborator, Paul Buckmaster, is on hand to briefly recall the work they did, and allude again to the tapes held in storage somewhere in Bowie HQ…

More time is given to the soundtrack that was finally used. As Chris Campion, biographer of composer John Phillips, points out, the legend of the Bowie soundtrack is so potent no ever really talks about the music actually heard in the movie. It gets its due here, though music nerds (us) might bemoan the lack of yet more detail: there’s no mention of BBC Radiophonic man Desmond Briscoe’s involvement, or the pieces by Stomu Yamashta. A CD of Phillips’s music is also included in the Collector’s set, along with some exciting art cards, a poster and original press material.

Elsewhere come new interviews with producer Michael Deeley, who’s valuable on the business of getting such an unlikely movie made; costumer designer May Routh, who shares her original sketches; and stills photographer David James.

Older interviews with Roeg, screenwriter Paul Mayersberg and co-star Candy Clark are imported from the previous Studiocanal/ Optimum release of 2011, along with the fine 25-minute making-of, Watching The Alien. Sadly, they’ve not been able to include the holy grail: the Bowie-Roeg-Buck Henry commentary that was originally recorded in 1992 and included on Criterion’s (out of print) 2005 Region A Blu-Ray. So obsessives still need both.
8/10