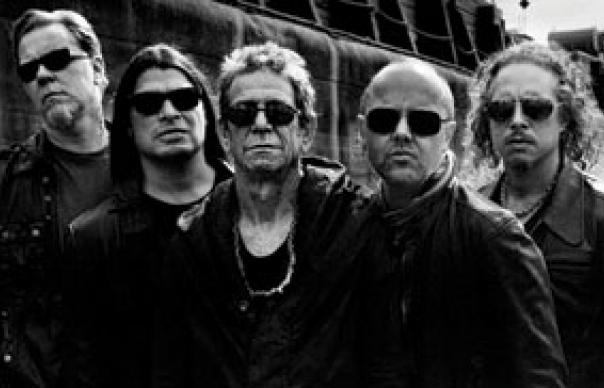 “It’s maybe the best thing done by anyone, ever. It could create another planetary system. I’m not joking, and I’m not being egotistical.” Thus Lou Reed on his new album. It’s quite a big claim, especially as this is not only a collaboration with Metallica, but is also a set of songs based on the Lulu plays by the late 19th-century German playwright Frank Wedekind. You can almost hear the ringtones in the playground.

Both Reed and Metallica have had a chequered 21st century, the former getting most career notice when Susan Boyle covered “Perfect Day” (Reed objected, then graciously gave his consent), the latter becoming the Spinal Tap of today after the often hilarious Some Kind Of Monster doc. Despite a decent showing at the Rock’n’Roll Hall of Fame, where Metallica backed Reed on “Sweet Jane” and “White Light/White Heat”, a collaboration on songs about an “anti-Eve” who becomes a willing victim of Jack The Ripper was hardly going to a) bring Reed new fans and b) entice the notoriously open-minded and liberal heavy metal community.

Lulu turns out to be, if not the best thing Lou Reed or Metallica have ever done, then more than pretty good. Everything on this immense album is intense, exciting, loud and generally all three. Metallica don’t so much sweep away Lou Reed’s musical cobwebs as fire nuclear warheads at them, while Reed adds a lyrical intensity and visceral poetry that makes everything bar the most Norwegian of metal sound weedy. What you don’t get is a rock band trying to play Velvet Underground songs; what you do get is a very big and horrible noise with lyrics and vocals that completely match.

Reed has always tried to bring the ideas and form of the novel to rock; admittedly, by “novel” he tends not to mean Dan Brown or even Graham Greene, but here his obsession with the spunk and shit of life works. “I would cut my legs and tits off/When I think of Boris Karloff and Kinski” he declares on the opening track, “Brandenburg Gate”, while James Hetfield roars out the phrase “Small town girl!” like a burning Aslan, and they pretty much take it from there. On “Pumping Blood”, a guitar cuts through the storm and Reed sings, “I swallow your sharpest cutter like a coloured man’s dick,” Over the relentless industrial laundry riff of “Mistress Dread”, he sings, “I beg you to degrade me/Is there waste I could eat?” It’s bleak, in the way that being pulled in half by tanks during a firestorm tends to be bleak.

Lulu is a record that stomps onwards and downwards. Eleven-and-a-half minutes of “Cheat On Me”, eight-and-a-half of “Frustration” (“I want you as my wife/Spermless as a girl”, sings Reed over a classic Metallica riff), and, as we pass from “Little Dog”’s bitterness (“A puny body and a tiny dick/A little dog can make you sick”) and “Dragon”’s 11 minutes of blind contempt (there’s a reference to “a Kotex jukebox” and the “red star of idiocy”), we come to the big one.

“Junior Dad” has been performed by Lou Reed with Laurie Anderson and John Zorn. Live, it was more of a drone, a few emotional and soul-wrenching lyrics about a father. With Metallica, unsurprisingly, it’s different. After cellos and the sound of Reed humming, the most extraordinary thing happens; a lovely New Order bass riff comes in, accompanied by a harmonium. It’s gorgeous, melancholy and recalls my two favourite Lou Reed tracks, “Street Hassle” and Songs For Drella’s “A Dream”, all in 20 extraordinary minutes. Reed’s lyrics – “Pull me up/ Would you be my lord and saviour?” – are hard to pin down but effective. “Scalding, my dead father has the motor/And he’s driving towards an island of lost souls,” he continues, sounding like a David Lynch (or Laurie Anderson) character. And then “Hiccup/the dream is over/Get the coffee, turn the lights on/Say hello to junior dad/ The greatest disappointment…” By now, the listener is feeling fairly overwhelmed – Hetfield and Kirk Hammett, who’d recently lost their own fathers, were moved to tears – as the song moves into six-and-a-half glorious orchestral minutes which recall, if anything, Gavin Bryars’ The Sinking Of The Titanic.

“Junior Dad” is breathtaking; and, while nothing else here is quite as astonishing, it’s a perfect ending to the most extraordinary, passionate and just plain brilliant record either participant has made for a long while.
David Quantick