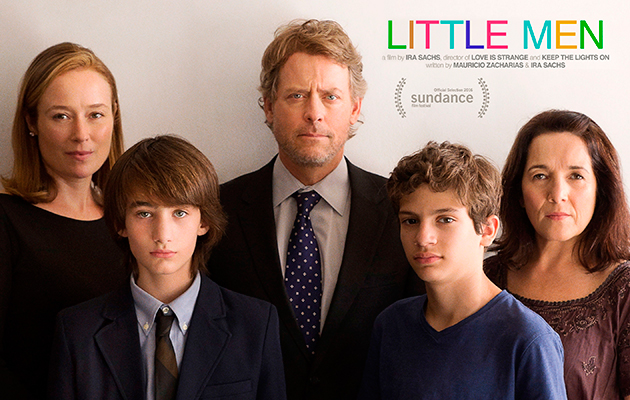 The pitfalls of urban living have made their mark on the films of Ira Sachs. In Love Is Strange, Alfred Molina and John Lithgow played a New York couple forced to live apart due to circumstances; for his new film, Little Men, Sachs focuses on a tug-of-war over a Brooklyn dress shop. Admittedly, a film whose narrative pivots around gentrification and rising rents might look like indie middle-class navel gazing, but the strength of Little Men lies in its canny casting and Sachs’ way with quiet, emotional beats.

Greg Kinnear plays Brian, an actor, who moves into his late father’s house in Brooklyn with his family – psychotherapist wife Kathy (Jennifer Ehle) and 13 year-old son Jacob (Theo Taplitz). Considering the erratic nature of Brian’s work, it is Kathy who has carried the family financially; the newly inherited apartment provides some relief from that burden. There’s a dress shop on the ground floor, run by a Chilean woman, Leonor (Paulina García), whose friendship with Brian’s father meant she enjoyed low rent. Encouraged by his sister, however, Brian proposes to hike the rent in line with the area’s increasing upward mobility.

Kinnear, Ehle and García are all predictably low-key and excellent; but the heavy lifting is done by Tapliz and Michael Barbieri, who plays Leonor’s son, Tony. The same age, Tony and Jacob become inseparable; but as their families fall out, their friendship becomes tested. Barbieri in particular is superb: he has a soulfulness and petulance, like a kind of teen Pacino.