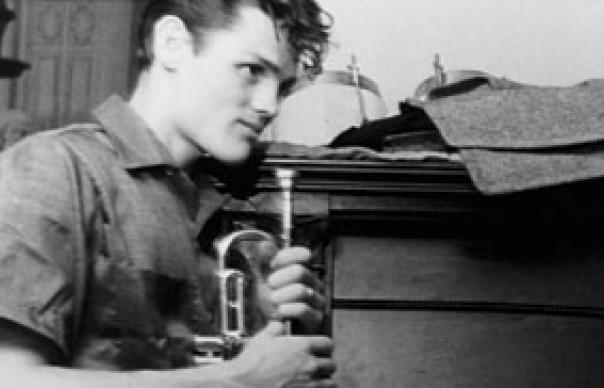 This biopic of the doomed trumpeter and baby-voiced crooner Chet Baker is very much a product of the 80s jazz revival, all moody monochrome shots in a furze of cigarette smoke. However, just as you think you’re watching one of Bruce Weber‘s achingly hip fashion ads, the film takes shape as a rigorously researched, beautifully told documentary, following Chet around America and Europe in his final year, playing odd gigs for drug money.

The contemporary interviews are cut with old footage, hilarious clips of Chet acting in terrible Italian b-movies, and excerpts from the 1960 Robert Wagner vehicle “All The Fine Young Cannibals” (apparently based on a young Chet). Friends, colleagues, wives and lovers provide insightful personal and musical commentary (“he was bad, he was trouble, and he was beautiful” says one ex wife); they also give us another perspective on Chet’s self-serving anecdotes (especially how he got his teeth knocked out). We see Chet as a troubled and unpleasant man, but it is to Weber’s credit that he captures the loveable rogue we hear in his music.