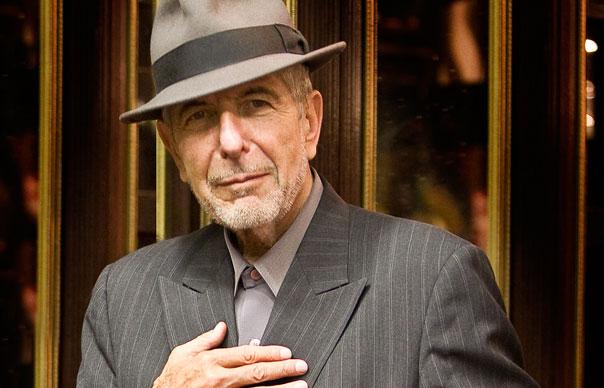 Once upon a time – as so many magical fantasies begin – there was a character called Leonard Cohen. He wrapped himself in the raiment of a poet, which turned out to be a role for which he was well equipped, blessed as he was with an imaginative, questing soul and a clever way with words. Leonard was a lucky fellow, for when poetry, allied to music, developed an hitherto unforeseen popularity in the 1960s, he was perfectly placed to capitalise upon that collusion. He had a voice, unusually low, that seemed to speak straight to the deepest hidden desires of women, in particular. Which was nice. And he was one of those particularly lucky fellows who, though not especially blessed with film-star good looks in his youth, matured like a fine wine or noble cheese, developing a winning handsomeness as he grew older. By the time he was in his Sixties, he had that kind of glowing charm, shared by such as Sean Connery and Jack Nicholson, that slayed all hearts that crossed his path. Lucky old Leonard!

But of course, as with all magical fantasies, there is a downside, a price to be paid for being so abundantly blessed, and for our hero, it’s the constriction that such an image places upon the inner man. Unlike most film and pop stars, Leonard Cohen has always displayed – if that’s quite the right word – deeply introspective leanings that confound the usual showbiz mores. He was quite happy, until suffering the cruelest of financial mishaps, to spend his dotage meditating, shaven-headed, on a mountaintop. Forced back out onto the road to replenish his pension fund at an age when most are drawing theirs, he had to don the poet’s raiment again, which in his case took the form of a stylish suit and raffish trilby.

“I love to speak with Leonard, he’s a sportsman and a shepherd, he’s a lazy bastard living in a suit,” is the sentiment which opens this first album in eight years, a typically wry, self-deprecating acknowledgement which in a few words sums up Cohen’s indulgent good fortune, his spirituality, and his easy charm; but which also casts the shadow later illuminated in the same song, the self-knowledge that, for all the supposed wisdom of his words, he’s “nothing but a brief elaboration of a tune”, and for that matter, keen to discard “this costume that I wear”.

The song is called “Going Home“, which is about as valedictory as it gets. It’s a textbook Cohen slice of insightful resignation, tinged with regret, and delivered over the wistful electric piano and synthetic reeds that made I’m Your Man so lazily beguiling. It’s a perfect opener for an album titled Old Ideas, which is itself a brilliant title for an album which pores over the passing and the past with such defiant, deadpan nobility. In “The Darkness”, a track whose subdued, whiskery blues style and sentiment makes it sound like something from Dylan’s Time Out Of Mind, Cohen confronts the inevitable with sanguine grace. “I’ve got no future, I know my days are few,” he admits. “I thought the past would last me, but the darkness got that too.” Ouch! So much, then, for posterity, even if he does try and dress the theme up in some of his characteristic obsessive-romantic erotic entendres later in the song.

Set to the plaintive plunking of banjo and poignant wisps of violin over a reassuring bed of organ and cooing angels, the track “Amen” gives some idea of the Old Ideas involved here. Again, it’s a rumination on deeper, darker matters delivered in the guise of a love song, the refrain “Tell me that you love me, Amen” punctuating a series of requests to “Tell me again…” that grow progressively bleaker as the song progresses: what kind of love song, for instance, includes a line like “…when the filth of the butcher is washed in the blood of the lamb”? Clearly, this is about love on a larger scale, about notions of ethics and morality being eroded away as if unnecessary for the future, as Cohen acknowledges with some asperity: “…when the victims are singing and the laws of remorse are restored”.

Continuing this theme, “Come Healing” is this album’s most likely heir to “Hallelujah”, a plea that the heavens might hear “the penitential hymn” and visit succour on both the heart and the mind, the body and the spirit. Although, given that “Hallelujah” was as much about triumphing over waning potency as it was about anything religious, “Show Me The Place” might be a more fitting successor. “Show me the place where you want your slave to go,” sings Cohen, “show me I’ve forgotten I don’t know.” Again: Ouch! So much for the endurance of sexual desire, presented here and in “Anyhow” as a matter of self-abasement before a reluctant lover – both songs plodding along to a glum blend of organ and piano that perfectly straddles the fine line between pathos and bathos, between cabaret suavity and crushing ignominy.

Elsewhere, “Lullaby” wafts languidly on an undulating guitar figure that’s like the breathing of a deep sleeper; “Different Side” pulses trenchantly along as Cohen examines the wretched situation of an increasingly antagonistic couple who “find ourselves on different sides of a line nobody drew”; and “Banjo”uses quaintly antique dobro, horn and clarinet to evoke how the mysterious image of “a broken banjo bobbing on a dark infested sea” affects him. But it’s “Crazy To Love You” that perhaps summarises Old Ideas most effectively: the thrumming acoustic guitar harks all the way back to his debut album whilst Cohen makes reference to “Tower Of Song” in confronting his waning powers. “I’m tired of choosing desire, I’m saved by a blessed fatigue,” he admits. “But crazy has places to hide in that are deeper than any goodbye.”

Time to get back in the suit, Leonard.
Andy Gill