Wah-wah scatting, grandad-dancing and fedoras... three hours in the presence of a legend... 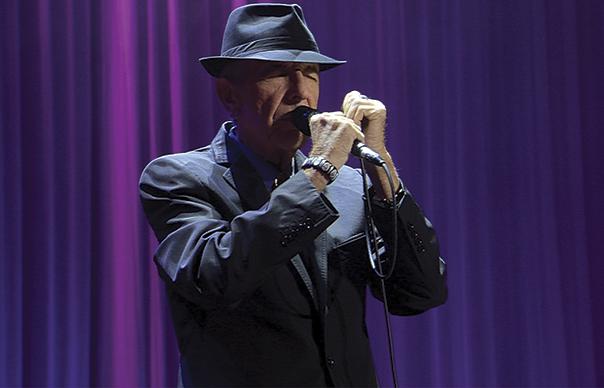 Wah-wah scatting, grandad-dancing and fedoras… three hours in the presence of a legend…

There’s a lovely moment, midway through “Tower Of Song”, when Leonard Cohen finishes picking his way through that song’s stumbling electric piano break, and the audience bursts into applause. As the band vamps quietly behind him, Cohen regards the crowd with a wry smile and asks, “Are you humouring me?”, immediately adding, “I accept it, thank you. If these are the crumbs of compassion that you offer to the elderly, I am grateful.” It’s another variant of a line he’s been using for a few years now, but it’s such a sweet sentiment, and so elegantly phrased, emblematic both of the mutual fondness radiating between performer and audience, and the shared degree of politesse assumed by both parties. And of course, the crowd responds with a massive cheer when he gets to the line about having been “born with the gift of a golden voice”.

He may be “a lazy bastard living in a suit”, as acknowledged in another well-received line from “Going Home“, but as he sails into his eighties, Leonard Cohen still puts in a serious shift: a generous 30 songs, spread over three hours, drawn from all but a few corners of his career, shot in gorgeous high definition on September 12, 2013. And while several of his musicians play seated, Cohen’s on his feet the entire time, save for the moments where he drops to his knees in supplication, beseeching the audience, or urging a player to greater heights of artistry. He runs on stage, clutches the mic like an alkie’s bottle, supping its emotional draught through opener “Dance Me To The End Of Love”, and even manages to skip gaily off the stage at the end of each set, as if confirming that the older one gets, the more one reverts to childhood.

His band are all dressed like Cohen, a legion of Leonards in grey suits and fedoras; but the colour is all in his imagery, and in their playing, particularly the rhapsodic violin of Alexandru Bublitchi and the exotic textures of Javier Mas. The latter’s brief but telling bandurria flourish accompanying the line in “Everybody Knows” about there being “so many people you just had to meet without your clothes” is typical of the expressive fluency involved – it’s like a little raise of eyebrows at the joke, no more, but wittily effective. And the tremulous archilaud solo that serves as an overture to “Who By Fire” is quite devastating, as befits this elegant valediction.

Elsewhere, guitarist Mitch Watkins inserts a deftly sensitive blues solo into “Bird On The Wire“, while keyboardist Neil Larsen furnishes the backing tones for Cohen’s recitation of the poem “For Those Who Greeted Me”, an ongoing rumination that was the root source of “A Thousand Kisses Deep”. Drummer Rafael Gayol, meanwhile, steals the band solos section in “I Tried To Leave You” by halting momentarily mid-solo, leaning towards the camera and blowing us a kiss, before coming back in smack on the beat. The show is studded with moments like that, tiny gestures or musical flourishes that decorate the measured poise of the performance. These songs don’t need a dazzling light-show or pyrotechnics to impress, and it would be perverse to expect more complex choreography than the sedate steps back and forth of backing singers Sharon Robinson and The Webb Sisters, generously accorded solo spots with “Alexandra Leaving” and “If It Be Your Will” respectively

Apart from his jaunty departures, Cohen himself restricts his physical output to a subdued grooving, a grandad-dancing shuffle on the spot, punctuated by the occasional sink to his knees. He acts with his eyes, keeping them tightly shut, then opening them wide for lines like those in “The Future” about murder and repentance, like some blazing-eyed preacher castigating his flock. That song’s mordantly-delivered cynicism about the declining moral certainties of modern life now seems like the seed of those concerns addressed in more recent albums; and although the concert pre-dates Popular Problems, the Old Ideas songs included here, such as “Amen” (kneeling, of course) and “Darkness” (for which Cohen indulges in weird wah-wah scat-singing) stand up well alongside classics like “First We Take Manhattan”, “Hallelujah” and “Suzanne”, the latter sounding as much like a hymn as any of the more overtly religious themed pieces.

“Famous Blue Raincoat” ushers in a tranche of encores, culminating in a charming singalong cover of “Save The Last Dance For Me”. It’s a fitting conclusion to a beautiful union of souls, a concert with the warmth and fraternal devotion evident in Cohen’s sweetly caring salutation, the kind of sentiment that just wouldn’t occur to less zen-conscious performers: “May you be surrounded by family and friends all your life; but if this is not your lot, may the blessings find you in your solitude”.
EXTRAS: Performances of “Show Me The Place”, “Anyhow” and “Different Sides” from Canadian shows.
Andy Gill