The Lemon Twigs – Go To School 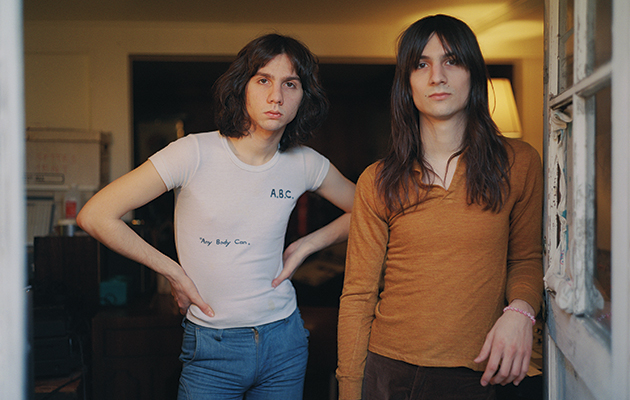 There’s Tommy, the disabled pinball expert; there’s Rael, a Puerto Rican street kid; and Pink, the disillusioned rock star; not to mention Messrs Stardust, Sorrow and Simopath. To this cavalcade of rock-opera heroes we can now add another: Shane the chimpanzee.

This primate is the primary character in Go To School, the second album by Brian and Michael D’Addario, two precocious brothers from Long Island with an average age of 20. Their debut album, 2016’s Do Hollywood, was a mixed bag, its ever-changing approximations of 10cc, Wings and Todd Rundgren evidence of huge talent and charm, but also a lack of focus. The follow-up, Go To School, is an hour-long epic, but in contrast it’s pin-sharp and streamlined, determinedly serving the ambitious story the brothers have created.

In short, the tale begins with Bill and Carol, who are unable to have children, so they adopt Shane, forcing Carol to give up her dreams of rock stardom to look after the chimp (“Rock Dreams”). Then the good-natured Shane goes to school, where he becomes an outsider (“The Bully”) and is betrayed by Daisy, the most popular girl in school (“Queen Of My School”). Rejected, he burns down the school (“The Fire”), accidentally killing 100 classmates, before fleeing to the woods (“This Is My Tree”) and having some kind of Hesse-esque spiritual epiphany (“If You Give Enough”). It makes more sense than Tommy, at least.

Musically, some of the record comes on as if Big Star had followed up #1 Record with a concept album about a great ape: so “Never In My Arms, Always In My Heart” and “Queen Of My School” are thrilling, sophisticated power-pop songs, with Michael D’Addario perfectly aping Alex Chilton’s faux-English accent on the latter. Elsewhere, the sax-funk of “This Is My Tree” could have sprouted from a cutting of Bowie’s Diamond Dogs, while the grand “The Fire” echoes Lou Reed’s Berlin.

Although those two concept albums have clearly made their mark on Go To School, along with Tommy, Quadrophenia and the like, a clue to the brothers’ true intentions is writ large on the album’s cover: “A musical by The Lemon Twigs”. Content that they’d learnt a lot of rock tricks already, the D’Addarios have devoured musical theatre ever since their debut. As such, there are other voices on the LP – Susan Hall, the brothers’ mum, plays Carol, while Todd Rundgren dramatically portrays Bill. Their duet, “Rock Dreams”, is one of the album’s finest moments, and an example of another strength of Go To School – it’s genuinely funny. “For seven hundred bucks a week I teach and it pays for all the food Shane eats,” sings Hall, before Rundgren bellows: “And he eats a lot!” “I know how you like your bananas,” adds Hall, as Carol prepares Shane’s breakfast.

The melodic twists and turns on the album’s ballads can be stunning too: “Wonderin’ Ways” and “If You Give Enough” could have come from Tin Pan Alley with their unusual chords and jazzy melodies, while the despairing “Lonely” might have graced Rundgren’s Something/Anything?. On “The Lesson”, the lush weirdness of Van Dyke Parks’ Song Cycle is another touchstone.

These four tracks all feature gorgeous if slightly syrupy strings, arranged and conducted by Brian D’Addario. Indeed, the brothers played and recorded nearly every instrument on the record, their wild drumming, needlepoint guitars and ornate piano-playing elevating tracks like the smoky, Gainsbourg-esque ballad “The Student Becomes The Teacher”.

Perhaps the most impressive element, though, is the neat way that the brothers tell their story. In the martial “Never Know”, Shane discovers that Bill and Carol aren’t his real parents: “I always treated you just like a son,” pleads Rundgren, “though you were never one.” “How was I so blind to think he was Father?” asks Shane on the following song, the Disney waltz of “Born Wrong/Heart Song”. “Something in my mind/I knew was different from others.” On “The Fire”, Shane takes action: “Daisy was his last hope/But she thought Shane a big joke,” the brothers sing. “Well, we’ll see who’s the big joke/When that school goes up in smoke!” After Shane flees to the woods, they murmur, “Life is real tough when just about no-one wants you…”

Like all the best concept albums, however, we leave Shane in a good place, alone but at peace, accepting that love within oneself is more important than love from others. There are questions – why did the most popular girl in school sleep with a chimpanzee? How did Shane not realise he wasn’t human? Just how does he like his breakfast bananas prepared? – but overall, Go To School is a blast, a joyous, ridiculous journey that treads a perfect line between silly, funny and heart-breaking.

After closer “If You Give Enough”, one gets the impression that, ultimately, the D’Addarios do care about their poor protagonist, this pure chimp corrupted by human civilisation. What’s more amazing, as the spotlight fades out on Shane, alone in his tree like some anthropoid Buddha, is the fact that now we do, too.