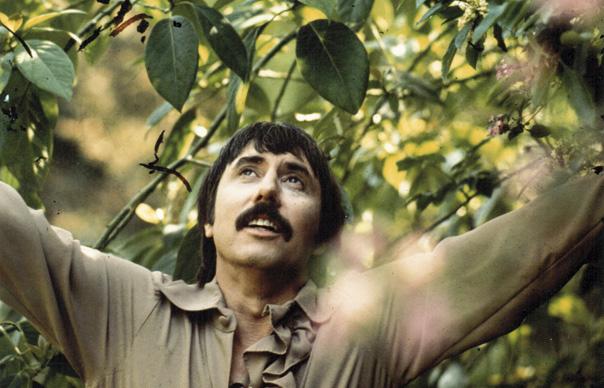 It was apt that Lee Hazlewood chose for his own epitaph the phrase “Didn’t he ramble?” Certainly, he covered a lot of distance in an unusual career: he helped Duane Eddy invent his sound, rubbed shoulders with Phil Spector, made a career for Nancy Sinatra in which his own baritone added a note of menace.

Since Hazlewood’s death in 2007, though, attention has shifted to the solo work, much of it completed during a lengthy stay in Sweden. At the centre of this sojourn, in 1975, he recorded an album that is strange, even by Hazlewood’s standards, not least because of its unapologetic good-humour. You might even call it romantic. Ostensibly, A House Safe For Tigers is the soundtrack to a 1975 movie made with Hazlewood’s frequent Swedish collaborator, director and sometime artist/poet Torbjörn Axelman. The pair made numerous films together, with the images swimming loosely around the songs in a way that burnished Hazlewood’s myth. In the 1970 film, Cowboy In Sweden, he was a lost horseman, a wandering star in a land of lovelies.

A House Safe For Tigers is the product of grander ambitions, with Axelman styling it as a “semi-documentary”, set on Gotland, his island home off the South-East coast of Sweden. What happens? Well, the film’s continuing obscurity means we must refer to Wyndham Wallace’s sleevenotes, where Axelman gnomically explains, “we let situations occur, let whatever happen happen. We showed realistic scenes from daily life and made them like a diary.” More specifically, Gotland life was compared to Hazlewood’s memories of oil rigs and riding the railroad. There is footage from Hazlewood’s birthplace in Port Arthur, Texas, and 8mm film of his parents. There is also, it seems, a man dressed in women’s clothing, a witch scattering tiger repellent, and shots of Hazlewood running the Gotland marathon. You can see why it’s only a semi-documentary. But there are revealing moments. The unlikely marathon man also notes that to escape, he wrote “simple words filtered through complicated songs”.

The film was barely seen, and the album sank with it. The happy news is that, strange as it is, the soundtrack works beautifully without reference to the movie. It features a funky orchestral interlude (“Las Vegas”), a reprise of The Shacklefords’ “Our Little Boy Blue” (a Hazlewood children’s song which can be viewed as a cousin of Rolf Harris’s “Two Little Boys”), and an orchestral interlude which collapses into cacophony (“Absent Friends”).

Generally, the mood is playful and benign, reflecting the peace Hazlewood found in Gotland. It is dominated by the magisterial “Souls Island”, a career highlight. Often, Hazlewood talks rather than sings, but here he croons prettily, invoking a sense of peace so powerful that he might also be anticipating heaven. This being Hazlewood, the shadow of death lingers, but the mood is majestic, with cinematic orchestration. Producer/arranger Mats Olsson (a veteran of several Eurovision campaigns) was given free rein by Hazlewood, who later compared the end results to Bach or Beethoven. Certainly, in the context of a pop record they are satisfyingly grandiose, and perfectly matched to the high emotion of Hazlewood’s lyric: “Except for the dream in our mothers’ eyes, you and I would still ride the wind,” he sings, “a pair of seeds that no one needs…”

“Souls Island” is later reprised with a Swedish commentary from Axelman which seems to draw parallels with the mythology of the American West. The words “Alcatraz” and “Wounded Knee” jump out from the monologue. Also worth noting are “Sand Hill Anna And The Russian Mouse” – a bizarre tale of Gotland grouse shooting, and “Lars Gunnar And Me”, a Johnny Cash-like number in which drink is taken and squirrel is eaten (Lars Gunnar being Hazlewood’s nickname for Axelman). The American Indian theme is revisited in “The Nights”, a weird little story song about hard work and sorrow, resilience and exile.