Best in nearly a decade from newly-trimmed Nashville collective 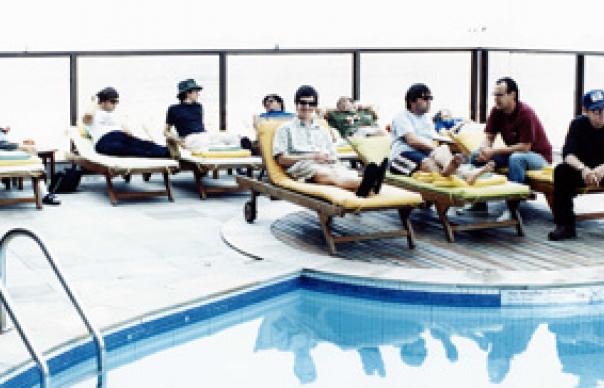 Lovely as they are, recent Lambchop albums have sometimes settled too readily into a kind of default setting: sad-slow songs that seem to wholly rely on the hushed vocal inflections of singer Kurt Wagner. Listening to parts of 2006’s Damaged, or predecessor Aw Cmon/No You Cmon, you could be forgiven for wondering what happened to the band’s early sense of adventure. So their tenth LP OH (ohio) lands with some nervous expectation attached. As it turns out, it’s their best record since 2000 landmark, Nixon.

Like most things these days, Lambchop have downsized. No longer the many-limbed beast of yore, they’re now down to a core of (just) seven. Maybe that’s one of the reasons this works so well. Songs like “National Talk Like A Pirate Day” and “Sharing A Gibson With Martin Luther King Jr” spark with a new-found energy, led by a pinwheel guitar suggesting a band flexing new muscle. Lyrically too, it appears more playful (understandable given that Damaged was informed by Wagner’s cancer scare), a more train-of-consciousness approach allowing ideas and images to gently buffet against each other.

“Slipped, Dissolved And Loosed”, with local girl Marty Slayton on back-up vocals, stuffs torchlight parades, blackbirds and Tony Curtis into a soft tumble of guitars that stretches out into a typically languid thing of ‘Chopian beauty. The dual production of regular Mark Nevers and newcomer Roger Moutenot may have something to do with the more catholic results too. Both “A Hold Of You” and “Of Raymond” (the former eddying around the sweetest of guitar figures, the latter unfolding with bedroom-soul horns) already sound like instant classics.

Of course, Wagner remains stage centre, unfurling his cryptic, witty, wise observations with all the womb-like warmth you might expect, even if (as on the aforementioned “Of Raymond”) it’s from the narrative viewpoint of a garden effigy of the Virgin Mary.