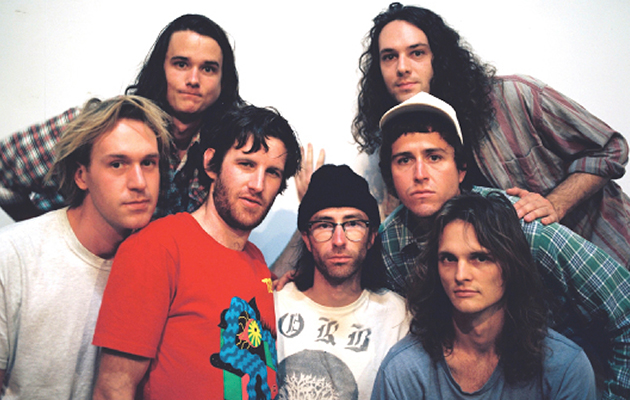 By their very nature, King Gizzard have always appeared to value loose spontaneity over the close approach of the craftsman. Since emerging from Melbourne in 2010, this seven-headed psych-rock monster have released seven diverse albums, each capturing quick-fire bursts of inspiration, and thrilling in their imperfections and impulsiveness.

On I’m In Your Mind Fuzz, their garage-punk breakthrough from late 2014, they managed to create half a concept album about mind control, before losing concentration and filling Side Two with slower, disjointed songs recorded at a different studio. As their notoriety grew, their restless, relentless muse last year spawned two albums exploring different tangents of their scattershot sound – Quarters was a laidback, semi-improvised effort with four tracks each lasting exactly 10 minutes and 10 seconds (it bizarrely bagged a Best Jazz Album nomination at the ARIAs), while autumn’s Papier Mâché Dream Balloon consisted of uncustomary pastoral, acoustic rambles.

Yet we now learn that these two albums were merely stopgaps, recorded while singer and guitarist Stu Mackenzie and his six cohorts secretly toiled on a project that would finish what they attempted with I’m In Your Mind Fuzz – a bona fide concept album, unified in sound and vision. While the last decade has undoubtedly been a fertile time for the kind of underground rock that takes inspiration from garage, punk, prog and psychedelia, Ty Segall, Thee Oh Sees and their ilk have so far attempted little on this scale.

Although it was tracked in four days at the all-analogue Daptone House Of Soul in Brooklyn, New York, Nonagon Infinity was meticulously planned beforehand, then the subsequent recordings were subjected to endless tinkering back in Australia. The need for this work becomes clear when the album is heard – each song on Nonagon segues into the next, while the end of the final track, “Road Train”, can even be looped straight back to careen headlong, Möbius strip-style, into the opening song, “Robot Stop”, their beats matched and primed. What’s more, various melodies, riffs and refrains pop up repeatedly throughout the album, making it more akin to a 41-minute suite than nine separate songs.

On first listen, Nonagon is a hard-driving, exhausting beast; powered by two drummers, “Road Train” edges into Motörhead hard-rock, while “Big Fig Wasp” continues King Gizzard’s adoration for Thee Oh Sees, mixing a motorik beat with Mackenzie’s echoed whoops and demonic guitars (chief Oh See John Dwyer fittingly released I’m In Your Mind Fuzz on his Castle Face label in the US). The seven-minute “Evil Death Roll” harks back to the manic momentum of Hawkwind’s Space Ritual version of “Master Of The Universe”, with distorted organ and super-wah’d guitars adding to the onslaught. There are few simple thrills here, as beats are dropped and riffs gallop along in unwieldy time signatures – “Gamma Knife” might be the most driving song ever conceived in 6/8, while “Nonagon infinity opens the door” is an earworm in 7/8 time. Though Mackenzie barks out vague orders on “Robot Stop” – “Loosen up/Time to jump/Fuck shit up/Don’t forget about it” – his lyrics are often unintelligible through the fuzz, with Hammer horror images of “corpses”, “pitchforks” and a “final hearing” breaking through the haze.

With repeated listens, however, what first seems like an oppressively flat landscape – giant steppes, perhaps – gradually reveals relief, and a lot more nuance that rewards repeated immersion. Subtler elements begin to peek out from the hard-driving tempos: the electric saz solo on “Robot Stop”; the synth storm swelling up in “Big Fig Wasp” that seems to mimic said insect’s mighty buzzing; the middle of “Invisible Face” that echoes the cool-jazz labyrinths of Quarters opener “The River”; the sections on “Wah Wah” that nod to the acoustic reveries of Papier Mâché…. The entirety of the punning “Mr Beat” is five minutes of relative respite, its clowning keyboards and falsetto reminiscent of Unknown Mortal Orchestra. Elsewhere, fidelities shift between (and even within) songs, with Mackenzie deliberately moving microphones around between takes to get more sonic variation.

As King Gizzard’s frontman tells Uncut, making Nonagon Infinity was a gruelling experience compared to the relatively breezy gestation of their previous work, and yet this prolonged concentration has resulted in by far King Gizzard’s most cohesive record to date – a hyper-detailed punk opera that few of their peers have matched for intensity, ambition or sheer derangement. It’s no accident that the end of the album links up to the start: those who listen may find it difficult to get off this particular Möbius strip.

Q&A
Stu Mackenzie
Where does your fascination with concept albums come from?
It gives you a drive, a reason or a motive to make music. I wouldn’t want to make the same record over and over again. Before we’ve started every record we’ve always had a little idea or a little direction. That’s always been the motive, to figure out the pathway to get to that end point.

With all the repeating refrains and cut-ups, how was it structuring the album?
It was a nightmare, but we got there in the end. A lot of it was stitched together digitally, because it was kind of the only way I could figure out how to do it. But there are quite a lot of tape edits in there. I think it’s my favourite album we’ve done, we just spent so much more time on this than anything before. I kind of hate it as well, just because of how much I listened to it.

Presumably you already have another album lined up…
I think we’re gonna need to take a little break after this one. It was a bit of a mind-melter, this one, just devastatingly difficult in some ways. We kind of crunched our little minds, so we might chill for a little bit. We’ve got some ideas, but I don’t know whether we’ll get another record out this year – probably just this one. Maybe we can do something more turbo next year, but I think it’s time to chill out!