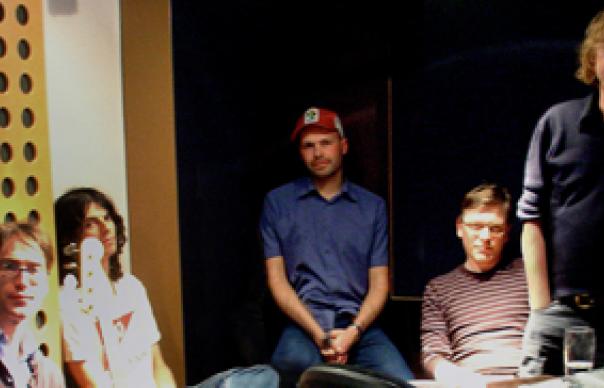 Perhaps unsurprisingly, Kevin Ayers‘s first album of new material in 15 years is largely concerned with the passage of time, its songs reflecting on lost loves, wrong turnings and missed opportunities. Which isn’t to say it’s in any way downbeat or depressing in tone: there’s an equanimity about the past that does Ayers credit, and which may be due in part to the relaxed Mediterranean lifestyle he’s pursued for the last three decades.

Indeed, the album would never have existed, had Ayers not bumped into a British painter near his home in the South of France. He didn’t know who Ayers was, but he knew a record company boss who did – and the former Soft Machine singer and psychedelic pop icon was lured out of retirement to record these ten songs with a team of old friends like Robert Wyatt, Phil Manzanera, Robbie McIntosh, Hugh Hopper and Bridget St John, and young fans including Euros Childs, Bill Wells and members of Teenage Fanclub.

The results are replete with the languid charm that has been Ayers’s stock-in-trade throughout his performing career, that unmistakable baritone croon – sometimes reminiscent of Nick Drake‘s – marked by an amiable world-weariness as he muses over things like social ease (“Walk On Water”), the redemptive power of love (“Wide Awake”), the value of dreams (“Brainstorm”), and how “Old shoulders become cold shoulders/Nothing left to dream on” (“Old Shoulders”). The latter is a theme he returns a few times, notably in “Friends And Strangers”, a plea to be freed from an obsessional relationship, which comes draped in strings that start out like “I Am The Walrus” then shift into Forever Changes mode.

The arrangements furnish some of the most beguiling aspects of The Unfairground, from the strings undulating like a carnival calliope on the title-track, and the horns adding a stately mariachi tone to “Baby Come Home”, to the nightmarish soundscape of piano, eerie vibrato strings and squally lead guitar that soundtracks his fearful reverie in “Brainstorm”. But whatever the situation, Ayers’s amenability shines through regardless, a wave of warmth that can lighten the heaviest soul.

U: Do you harbour any regrets regarding your career?

KA: Yes – giving in to, and allowing myself to be too influenced by, all those around me who wanted to make me into their idea. My whole background, whether in Soft Machine or on my first four albums for Harvest, was the product of someone not the least bit interested in fame, and that’s where I very much am now.

U: Do you keep abreast of musical fashion? What current music do you enjoy?

KA: I left England permanently in 1978 and had been away more often than not before that. I have been living in either Deià in Spain or the South West of France, and pretty much cut off from the scene. In my home now I listen to a lot of jazz – I go through phases and am just coming out (again) of an early Beatles phase – I just love those harmonies.

KA: It’s the combination of the first two which works for the third, or too much of the first and the loss of the second as well, I guess. But as one might feel about one’s children, I wouldn’t want to publicly declare a favourite.