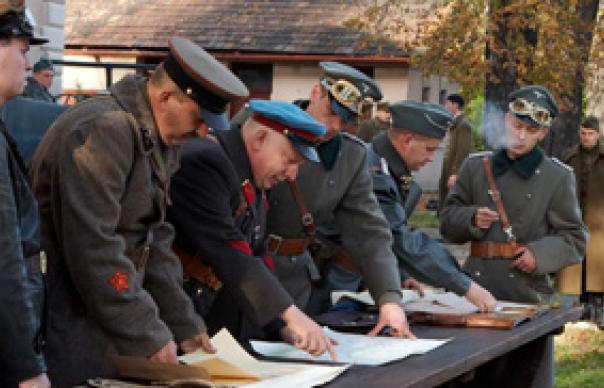 To the uninitiated – those raised on Western histories of World War 2 or, worse still, Hollywood’s take on the conflict – the opening moments of Katyn may seem confusing. They take place on a bridge, as a group of Polish refugees fleeing the Nazis head towards an area controlled by the Soviet army. The light is grey. The scene is a chaotic, grim. The crowd surges forward, its progress slowed by refugees heading in the opposite direction, carrying dire warnings. All the talk is of war, and how long it will last. “Hitler declared a thousand year Reich,” a Polish officer says with bleak humour, “and Communism is forever.”

It is a perfect Andrzej Wajda scene. The octogenarian director has spent a lifetime exploring Polish national identity, despite operating for much of that time under the strictures of communist censorship. As one of the members of a group known as the Polish Film School, he exploited the partial liberalisation that occurred after Stalin’s death in 1956, making Kanal, the first film about the Warsaw Uprising. His dedication to the subject of Polish national identity – and a style of cinema which makes no apologies for its national bias – was evident in his films Man Of Marble and Man Of Iron, which documented the rise of the Solidarity trade union.

Katyn is no different, and those who are unfamiliar with Polish history may find it slightly bewildering at first. The film cuts between events with little explanation, and Wajda makes only minimal efforts to sugar the pill. A brief tug at the heartstrings with a little girl and a lost dog is the only hint of Spielberg-like sentimentality; otherwise the mood is fateful and stubbornly sombre.

Neither is this a matter of suspense. Polish audiences would have known what was about to happen –the massacre of more than 20,000 Polish officers by the NKVD (the Soviet Gestapo), as part of a deliberate plan to wipe out the country’s intelligentsia. But the film is structured in a way that somehow heightens the anxiety of the viewer.

As much as the killing itself, it is about the symbolism of the Katyn massacre, which was exploited by the Nazis and the Soviets. Wajda uses fragments of propaganda films from both sides, and their cynicism is still shocking. When Poland was under communist rule, the massacre was officially said to have taken place in 1941, when Katyn was under German occupation. Even to state the actual date of the event – a year earlier – was an act of subversion.

Wajda’s connection to the material is deeply personal. He was 13 in 1939, when his father, a Polish cavalry officer, was taken prisoner by the Soviets. His father was killed in the massacre. His mother waited throughout the war for news, only accepting at its end that her husband wasn’t coming home. It is only slightly hyperbolic to suggest that this is the film Wajda has been working all his life to make. It was certainly impossible during the period of Soviet domination and, post-1989, there were more urgent questions of national identity.

But still, the question remains. The horror of the massacre is obvious, but where is the story? The director worked for 12 years on 30 drafts of the script. In Poland, the Katyn massacre has become a broad symbol of political cynicism. How to dramatise that?

Wajda solves the problem by reflecting the experience of both of his parents. If anything, he concentrates more on the story of those who were left behind, and the little compromises and accommodations they had to make in order to survive. This is a complicated brand of heroism – and Wajda certainly implies that if the Poles weren’t exactly complicit in their fate, they were at least badly led. His sympathies seem to be with a boy in one scene which takes place after the war, who is told in an interview for art school that he must amend on his application form the date of the death of his father (in Katyn) from from 1940 to 1941. He refuses, runs from the building and defaces a Soviet propaganda poster, and is promptly killed.

Obviously, this isn’t strictly autobiographical, but Wajda’s sympathies are clear; Poles had a duty to resist oppression, whatever the consequences. In another post-war scene, a woman sells her hair to pay for a gravestone for her brother. Her insistence on recording the accurate date of death on the stone leads to her arrest, and she faces down her interrogators, saying bluntly: “I choose the murdered, not the murderers.”

So it’s not a feelgood movie. But is technically-brilliant filmmaking of a style that is rarely seen anymore – dense in allusion and symbol, light on character. Wajda’s great achievement is to bring history alive without cheapening it. The brutal ending is no surprise, but it is still a shock. These men were not killed on the battlefield, or even in the woods of Katyn. They were slaughtered, one by one, in a human abattoir.