Kaiser Chiefs – Off With Their Heads

Third album from the Leeds band unites them with producer du jour Mark Ronson, plus Q&A 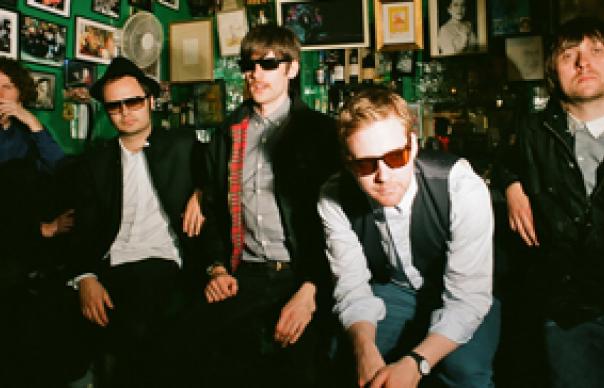 Any band that’s shifted four million albums, filled football stadiums and been invited to Downing Street should probably expect it, but the Kaiser Chiefs do seem to attract virulent hatred from a certain brand of indie-rock purist. Partly it’s their age (like Franz Ferdinand and Hard-Fi, the Kaisers have one failed band under their belts and are all in their thirties). Partly it’s their relentlessly jolly demeanour (the waistcoats and trilbys, the end-of-the-pier stageshows, the wisecracking press conferences). Partly it’s the suspicion that they’ve spent their career ripping off Blur (in their initial incarnation as Parva they sounded like Blur in their Pavement phase; debut album Employment sounded like Blur in their Parklife phase; Yours Truly, Angry Mob borrowed from The Great Escape).

But mainly it’s because the Kaiser Chiefs seem utterly incapable of making songs that aren’t infuriatingly catchy, packed with anthemic, shout-along choruses, earworm keyboard riffs and lyrical couplets that quickly work their way into your subconscious. In an indie world that valorises shabbiness and insouciance, the Kaisers craftsmanship and charm leads them to be dismissed as craven populists with a desperate desire to be loved; a bunch of grammar school kids who lack not only the pigheaded swagger of a Gallagher but also the art-pop pretensions of their beloved Blur.

Album number three sees them trying to avoid the Blur comparisons by ditching Stephen Street (the Smiths and Blur producer who helmed the first two albums) for desk jockey du jour Mark Ronson, who teams up with assistant Elliot James. Some feared that Ronson, who had a Top Ten hit with a version of the Kaiser’s “Oh My God” (sung by Lily Allen), might use the band as a vehicle for his horn-heavy funk pastiches. Ricky Wilson joked that the band instituted a “no trumpets” rule to avoid Ronson’s trademark horn sections, and his sonic signatures remain oddly muted on Off With Their Heads. He and Jones gently nudge the band in a dancefloor direction (adding Talking Heads to their cultural references), but otherwise the Kaisers’ anthemic ambitions remain intact.

If Off With Their Heads represents a change, it’s that the band here seem more comfortable with riff-based, single-chord drones rather than having to pack in the chord changes. The album opens with the incendiary “Spanish Metal”, a riot of sludgecore guitars and medieval harmonies, and continues with “Like It Too Much” where a chugging Black Sabbath guitar and a plinky piano riff suddenly starts to sound like XTC (Wilson’s voice is even a deadringer for Andy Partridge) before turning into a Beatles-inspired epic (complete with David Arnold’s cinematic strings).

Otherwise, it’s back to business with a clutch of hook-laden pop tracks. Best of all is the lead single “Never Miss A Beat”, a slyly subversive football terrace chant which, like “I Predict A Riot”, pokes fun at the ASBO’d-up lumpenproletariat (“what did you learn today?/I learned nothing… what did you learn at school?/I didn’t go… what do you want for tea?/I want crisps”) whilst simultaneously displaying a sneaking admiration for the demographic (“the kids on the street who never miss a beat”) who will doubtless be shouting along the chorus on the next tour.

Other prime pop nuggets include the thrashy stompalong “Can’t Say What I Mean” (“nothing can be so important/that it can’t be shortened/to fit on a badge”); the thrilling one-note punk pop of “Half The Truth” (which features a fantastic cameo from UK hip hop artist Sway); and “Always Happens Like That”, a sweet, McCartney-esque miniature with a thunderous chorus (it’s also the second track to feature Lily Allen on backing vocals). And Nick Hodgson – the band’s drummer, backing singer and principal songwriter – steps out from behind the kit to deliver the rather lovely Lennon-esque closing ballad “Remember You’re a Girl”, a marked improvement from his awful vocal debut “Boxing Champ” on the last album.

As on both their previous albums, however, there are moments when the maddeningly catchy tips into the utterly maddening: “Addicted To Drugs” is a supremely irritating slice of hamfisted funk, while “Good Days Bad Days” witlessly borrows from “Boys & Girls”-era Blur to the point that the shoutalong choruses and wiggly guitar riffs just sound inane.
Still, these caveats aside, it seems churlish to attack a pop group for the crime of making great pop music. Uniquely, even after playing to 35,000 at Elland Road, there is no complacency, no grandstanding, none of the misplaced hubris that affected Oasis after Knebworth. This is regal, majestic pop music played with a roundheaded bluntness. Off with their heads indeed.

How did working with Mark Ronson and Eliot James differ from your old producer Stephen Street?

Stephen is brilliant. The thing is, being older than us, he has a natural authority in the studio. Mark and Eliot are both the same age as us, so it was more of a playground, a joint production effort, which suited the indie dancefloor feel we wanted. Also Mark approached us very much as a fan – he wanted us to make the kind of record that he would like. He was constantly saying, “that’s not as good as ‘Oh My God’, why don’t you try it another way?” and getting me and Ricky to rewrite stuff up until the last minute.

How did the songwriting process change with this album?

I always say that I’ve never actually finished a song on my own – usually I bring in an initial musical idea on the guitar or piano which we all finish off together. We still did that here, but quite a few tracks – including “Half The Truth”, “Always Happens Like That” and “Addicted To Drugs” – were written collectively during studio jams, where someone would start playing an interesting riff and we’d stop what we were doing and play along.

What have you been listening to lately?

I’ve just read that Simon Reynolds book on post-punk, and I’ve been seeking out lots of music mentioned in it that I’d never heard before, like Pere Ubu, ESG and the Tom Tom Club. Some tracks here were really influenced by that punk funk, mutant disco stuff. We actually played some ESG and the Tom Tom Club before going in the studio to record “Good Days Bad Days”.

What did the guests bring to the album?

I wanted to use female backing singers like Bananarama, not someone doing harmonies, or trying too hard, just someone who sounded natural and unforced. So Mark contacted Lily Allen, who was perfect. She’s on two songs – “Never Miss A Beat” and “Always Happens Like That”, while the New Young Pony Club are also on the former. We worked with David Arnold on an Electric Prom and he offered to do something with us, so he did some string arrangements on “Like It Too Much”. And Sway was in the next studio – we got him in to fill in this 16-bar gap on “Half The Truth”, which worked brilliantly.

What’s the story with “Never Miss A Beat”?
There’s a degree of piss-taking there. The line about “what do you want for tea/I want crisps” is from Jamie Oliver’s series about school dinners. I like to think we’re on the side of, ahem, “the kids on the street”…