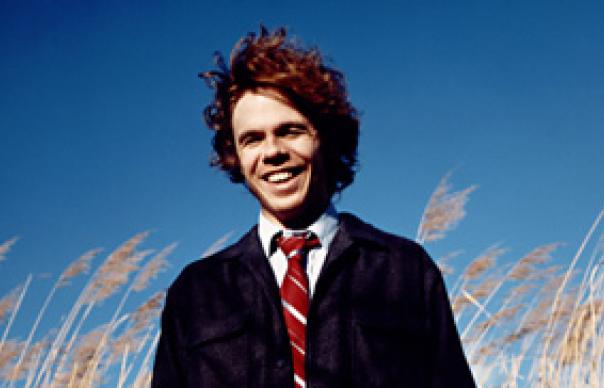 Evidently wary of the heavy-handed earnestness that blights many an acoustic singer-songwriter, Josh Ritter has lately been looking for ways to extend his range. Last year’s ‘The Animal Years’ was a move away from the steady James Taylorisms of his first two records, and contained two post-Dylan protest epics in “Girl In The War” and “Thin Blue Flame”.

This album, his fourth, moves things on even further – and finds Ritter cutting loose and having some old-fashioned fun. ‘The Historical Conquests…’, recorded in a Maine farmhouse with a bunch of able musician friends and the grandly-titled Great North Sound Society Orchestra, is the sound of Ritter cutting loose: with fourteen short, sharp, richly melodic songs about love, gunslingers and Joan of Arc.

It’s clear from the crashing cymbals, clanging guitar and distorted vocals of “To The Dogs Or Whoever” that he’s having a ball. Now invoking the Dylan of ‘Highway 61 rather than the pale social commentator of ’63, here there’s a spirit of adventure that continues throughout. There’s a real gallop to the piano-driven “Real Long Distance”, whilst the Beatlesy, vaguely funky “Rumours” finds Ritter revelling in his new-found freedom: “My orchestra is gigantic / This sound could sink the Titanic / And the string section’s screaming / Like horses in a barn burnin’ up”.

In his more restive moments, there’s a raw, edge-of-the-moment feel to “Open Doors” and “Wait For Love” that suggests he’s less precious about the packaging of his art these days. Some songs, like the 50-second “Moons”, are content to appear as mere impressions of ideas. However Ritter’s ideas manifest themselves though, the overall effect of this loosening up is to show him in a new light. More than just as a troubadour, the Josh Ritter who appears here is primarily a writer of quality pop songs.