The solo debut by The Smiths guitar ace is a joyous return to the sound of his greatest triumphs... 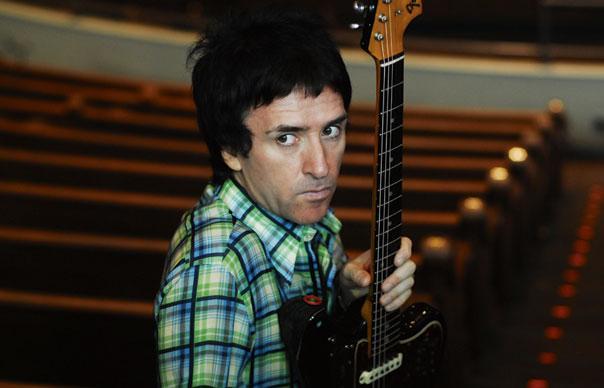 Placed bang in the middle of The Messenger is a song that explains a great deal about Johnny Marr. “Generate! Generate!” is, in its author’s own words, “a song in praise of hyperactivity”. The hyperactivity in question is Marr’s own, borne out by the song’s stark contrast between a chanting, marching, almost laddish verse and a dreamy Smithsian chorus. It even risks an intellectual pun: “Cogito ergo dumb”, from cogito ergo sum, the original Latin version of philosopher Rene Descartes’ “I think, therefore I am.” Marr paints himself as a man oscillating wildly between thought and action: “Sensations jacked my thinking… I can’t get behind a one-track mind”. Which, if nothing else, explains Marr’s restlessly eclectic, permanently transient CV.

Over the last decade, Marr has, among many other shorter, sharper projects, made his one-and-only album, 2003’s Boomslang, with his own band The Healers, become a full-time member of both Modest Mouse and The Cribs, and popped up on the soundtrack of Christopher Nolan’s Inception. Throughout this time Marr lived in Portland, Oregon, and it seems that the decision to move back to Manchester and the decision to finally make an album under his own name are more than coincidence. The Messenger is Marr’s attempt to relocate his roots in order to express his deep dissatisfaction with the rubbishness of modern life. Not a surprising angle for a smart, left-leaning nearly-50 rock ‘n’ roller to take perhaps. What is more surprising – and happily so – is that much of Marr’s debut solo album sounds like The Smiths.

Of course, Marr can neither sing nor write lyrics like Morrissey. But many of the tunes here bear a comforting familiarity, the sonic palette is resolutely rock-meets-indie with an ever-present melodic lilt, and, best of all, the guitars acoustically jangle and electrically rage and soar in a way that can only be described as trademark Johnny Marr.

The Messenger’s other singular quality is that its an album that gets better as it goes along, almost as if Marr arranged the running order to reveal his own creative confidence gradually returning. Opener “The Right Things Right” sets the thematic tone, as Marr’s staccato lyric strives to find a path through the din of modern capitalism. But its an underwhelming verse saved by an earworm chorus, and the following “I Want The Heartbeat” does that angular, robotic thing that rockers often do when they want to moan about the dehumanizing effects of technology.

Things properly gets going on third track “European Me”, a sort of “Safe European Home” for both asylum seekers and exiled guitar icons which crosses “Rusholme Ruffians” with Felt’s “Penelope Tree”, and sees Marr’s almost Lloyd Cole-esque vocal merge with the sweet backing trills of daughter Sonny on the truly lovely chorus. Somewhat anonymous verses washed away by fantastic refrains is a recurring motif throughout.

From there, “Upstarts”, the title track, the definitively Smithsian “New Town Velocity” and the dystopian Franz Ferdinandisms of “Word Starts Attack” match “European Me” and define the best of this persuasive, questioning record. The highlight, though, is a fascinating anomaly in light of Marr’s statement that The Messenger is an album he might have made if The Smiths had never happened. “The Crack Up” is a cracking retro-‘80s pop song, where the synths share centre-stage with the guitars, the rhythm prowls, and something special emerges from the contrast between the eerily youthful calm of Marr’s croon and the sinister feel of the dark melody and fretful, cut-up lyric about misused (or abused?) teenage models. The only thing in Marr’s back catalogue that hints at a similar aesthetic is his work with Matt Johnson over twenty years ago.

The Messenger isn’t an album that will blow any non-believers away. It is old-fashioned, in many ways, and its message of humanity being bullied by an alliance of corporate greed and digital distraction is gently conveyed and often oblique. But, even if none of Marr’s concerns engage you, there is one thing above all that makes The Messenger worth 45 minutes of anyone’s time. It features the guitarist from The Smiths playing guitar like the guitarist from The Smiths. And that remains one of the very best noises on Earth.
Garry Mulholland