The ex-Smith’s most powerful solo LP yet 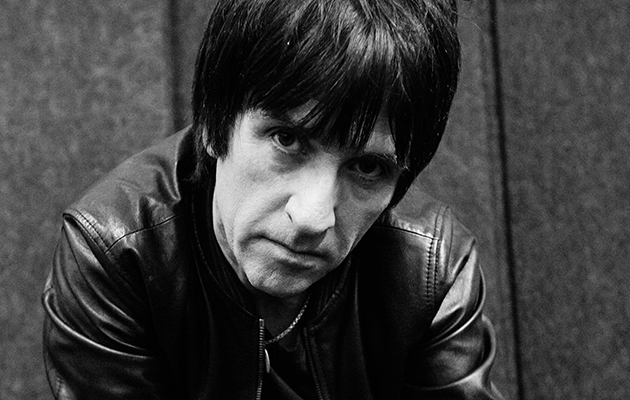 In Set The Boy Free, his brisk, bullish autobiography published in 2016, there’s a great photo of Johnny Marr from 1981 or 1982, still working at X-Clothes in Manchester, but clearly already in the green room of pop history. He’s posed immaculately in the corner, dressed head to toe in Wild One leather, eyeing the camera with teenage Brando defiance, as if demanding of the nascent ’80s pop scene, “Well, whaddya got?”

The teenage Marr was a musician of freakish facility: you can easily imagine alternative ’80s timelines where he led a Factory avant-funk act, fingerpicked his way through a Pentangular folk career  or crafted immaculate scally sophistipop à la The Pale Fountains. But it’s the Johnny Marr in this photo that you can imagine has been biding his time to record Call The Comet, his third, most powerful and most cohesive solo record yet.

In a funny way it’s an album of BIG MUSIC, a peer of the Bunnymen’s Heaven Up Here, Simple Mind’s Empires And Dance, the John McGeoch of the Banshees’ Juju and Magazine’s The Correct Use Of Soap. If The Messenger and Playland saw him dedicated to writing precisely concise and askew new-wave post-punk pop, and occasionally giving the impression he would very much have liked to compose the first Franz Ferdinand album, here he gives free rein to a more grandiose spirit, channelling some of the sublime scale of his soundtrack work with Hans Zimmer.

“Rise” sets the Olympian tone, sounding uncannily like the theme tune for Sky’s Super Sunday as it might be performed in the future dystopia of Diamond Dogs: “Now here they come, it’s the dawn of the dogs/They howl and they howl and they never let up.” Lead single “The Tracers” ups the tempo and intensity, evoking that mid-’80s moment when New Order (“Sunrise”), the Banshees (“Cities In Dust”) and even Killing Joke and Sisters of Mercy mapped out a magnificent cinemascope gothic pop. It may be possible to tease out the threads of some sci-fi album concept in the lyrics (“Tracers know we’ve lost our way/Take all the love we’ve lost and scattered”), but in truth the track, and the album, are most thrilling when Marr simply surfs the scintillating waves of guitar with wordless sighs and woo-hoos. Indeed at times it’s tempting to imagine an entirely wordless, shoegaze instrumental version of the album.

Even after three solo albums, it’s fair to say that Marr still doesn’t seem like a natural frontman. In football terms, fronting his own band requires him to be a kind of deep-lying false nine, or, like Roberto Firmino, one of those players who strive to be everywhere on the pitch at once. You sense he might be more comfortable as David Silva, masterfully conducting play from the middle of the park.

In conversation with Bernard Butler last year for a radio show on the reissue of The Queen Is Dead, Marr talked about how the relatively unheralded “Never Had No One Ever” was in fact the key to the whole record, distilled from a memory of playing along to “I Need Somebody” from Raw Power in his bedroom, illuminated by the moon and the streetlights. That lonely sodium streetlight sound – his equivalent of Dylan’s wild mercury – is all over Call The Comet, notably on the bloodcurdling solo of “Hey Angel” and the stark acoustic strum of “Day In Day Out”. But, though he’s now an assured singer, Johnny is no Iggy. There’s no shame in that – nobody else is either. But unlike Siouxsie or Ian McCulloch or even Bernard Sumner, he can’t coast through a song on vocal charisma alone.

It might be best to appreciate Call The Comet as a sublime soundtrack, possibly the most atmospheric, widescreen guitar album you’ll hear all year: from the haunted shimmer of “Hi Hello” to the cracked Bowie of “Actor-Attractor”, from the Simple Minds stadium futurism of “Spiral Cities” to the coruscating Banshee screech of “My Eternal” and the spectacular sunset of “A Different Gun”. It feels very consciously the third part of Marr’s modern Manchester trilogy: if The Messenger revisited his Wythenshawe street-urchin ambition and Playland critiqued the cosmetic glitter of the 21st-century metropolis, then despite everything, here he’s dreaming of a better world. With maybe only Paul Weller as a peer, he’s still refusing to look back, to reform, to trade on his awesome back pages. Almost 40 years on, he’s still unmistakeably the cocksure kid from that ’80s clothes shop making his own demands on the future.