The complete Memphis recordings on eight CDs, including a cornucopia of rarities 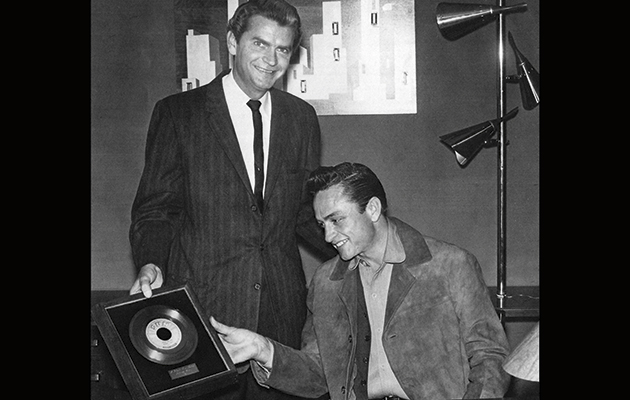 The early discography of The Man In Black is, frankly, a bit of a mess. Not the fault of Cash, who sang and played with conviction on every session he recorded. But the machinations of the industry have bequeathed nothing but confusion and muddle – often quite deliberately so.

After an audition at Sun in 1954, Sam Phillips, signed Cash the following year. But the vinyl LP was still a nascent form and it was not until 1957 that his debut album, Johnny Cash With His Hot and Blue Guitar, eventually appeared, haphazardly including some but not all of the half dozen singles which had preceded it.

By the release of his second Sun LP, 1958’s Johnny Cash Sings The Songs That Made Him Famous, Cash had left the label and recorded his first album for Columbia. That wasn’t going to stop Phillips, who had stockpiled sufficient material for another five albums, so that by the time the vault had been exhausted with 1964’s Original Sun Sound Of Johnny Cash, there were 16 Cash albums on the market, seven on Sun, featuring 83 tracks recorded by Phillips between 1955-58, plus nine more on Columbia.

To add to this perplexity, both labels gave albums such misleading titles as Greatest! and The Best Of Johnny Cash and Columbia cynically muddied the waters further by releasing an album of Nashville re-recordings of Cash’s Sun hits such as “I Walk The Line” and “Folsom Prison Blues”.

Still with us? Good, because this deluxe eight CD set, released to coincide with the 60th anniversary of Cash’s first LP and what would have been his 85th birthday, sort out the mess. Housed in a lavish, LP-sized 60 page book which reproduces the original art work, it’s the first time all seven original Sun albums have been collected together in a single edition.

The crown jewels they contain will be familiar enough, but the bonus disc of 23 outtakes, rarities and alternative versions contains several further gems. The 1954 solo demos “Wide Open Road” and “You’re My Baby (Little Woolly Booger)” have a lovely, loose rockabilly feel. The sly wit of 1955’s “My Two Timin’ Woman” was forgotten until Cash re-recorded the song 48 years later with Rick Rubin, while a surprisingly tender version of Marty Robbins’ “I Couldn’t Keep From Crying” remained unheard until 1978. A raw demo of “Rock and Roll Ruby”, later a hit for Warren Smith, shows that Cash could rock as convincingly as any of the pioneers while his rich baritone on an early take of “I Love You Because”, stripped of its overdubbed chorus and with Jerry Lee Lewis on piano, puts some guts and gristle into crooning that Jim Reeves never could have imagined.