JOANNA NEWSOM – HAVE ONE ON ME

Bottoms up! Pianos, soul and a remarkable triple album... 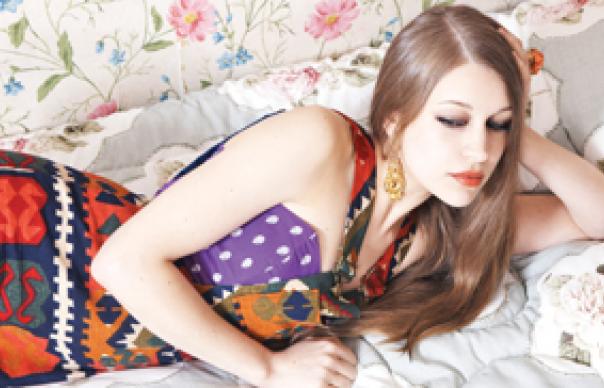 It may be a stretch to call Joanna Newsom‘s third LP her down-to-earth pop record.

Have One On Me does, after all, extend across three CDs of generally very long songs, features a harp duelling with a kora, and a dream sequence in which the singer arrives before her lover “on a palanquin made of the many bodies of beautiful women.” On the back of an elephant.

Nevertheless, there’s a distinct sense that Newsom has moved on after the crenellated extravagances of her last album, 2006’s Ys.

There are no lavish orchestrations by Van Dyke Parks this time, instead Newsom fronts a more compact and mobile ensemble led by her live band’s guitarist, Ryan Francesconi. The Pre-Raphaelite damselry has been superseded by some fiercely directional haute couture. Piano takes over from harp on five of the 18 tracks. An evasive indie boyfriend, Bill Callahan, has gone, replaced by a mainstream comedian, Andy Samberg, whose own musical endeavours include the rap “Jizz In My Pants”. And where Newsom’s voice was once an uncanny, shrill blend of the childlike and ancient, she now sings with a composure and soulfulness that stands comparison with Laura Nyro.

Old, somewhat arbitrary categorisations for Newsom – acid-folk, say – have less use than ever when it comes to considering Have One On Me. “Good Intentions Paving Company“, for instance, finds Newsom at the piano, leading her band off at a jaunty canter before sliding into an ineffably lovely, bluesy refrain. It’s an intricate song, certainly, but there’s a linear momentum which hasn’t previously been evident in her songwriting. A passionate lyrical directness is more pronounced, too: after five minutes of gripping prevarications on love, performance and a plainly emotional car trip, she announces, “I only want for you to pull over, and hold me/Till I can’t remember my own name.” It’s a classic Newsom epiphany – one of a good dozen on the album -and the formal end of the song, but the track rolls on gloriously for another 90 seconds or so: some wordless multitracked harmonies; limber drumming from the consistently innovative Neal Morgan; a touch of banjo from Francesconi; and a woozy, jazzy trombone solo, of all wonderful things.

Throughout, in fact, Have One On Me is suffused with space, invention and playfulness, even in the face of Newsom’s sometimes unnerving intensity. It’s also exceptionally beautiful, from the revenant sigh of “Easy”, to the stark song of parting, “Does Not Suffice”, Gospel-tinged and worthy of Nina Simone, that closes the album some two hours later. Faced with such a marathon, it’s tempting to comb the three discs for extraneous songs. But Newsom’s vision is so pervasive, and the quality of her songs so high, that the size of this indulgent-looking package seems utterly justified.

Ryan Francesconi deserves to share some of the credit, for the imaginative but unobstrusive arrangements that provide such subtle variety. Four songs feature Newsom alone with her harp, in an echo of 2004’s The Milk-Eyed Mender, and a handful more find her discreetly tracked by a small string section. Elsewhere, though, Francesconi pulls off more audacious tricks. In “Go Long”, a kora (played by Seattle-based scholar Kane Mathis, rather than a Malian griot) slips adroitly into the mix, flitting around Newsom’s harp and asserting her claims to be influenced by West African music. Francesconi, who mainly favours a Bulgarian tambura (a kind of lute), punctuates “Baby Birch” with some empathetic clangs of fuzzy electric guitar. The 11-minute “Have One On Me” (the whole album is studded with references to drink and drunkenness, intriguingly) is a skewed jig, of sorts; a relative to “Colleen”, Newsom’s first studio collaboration with Morgan and Francesconi on the 2007 “Ys Street Band” EP.

A buccaneering horn section figures, too, a recurring feature that helps give Have One On Me its peculiar swing. Along with “Good Intentions Paving Company”, “You And Me, Bess” and “In California” currently sound like the highlights from this embarrassment of riches. The first is a rapturous coupling of Newsom’s harp with trumpet, horn and trombone, who elegantly break out into jazzy extempores: the point at 4:53 when Newsom sings, “It seems I have stolen a horse,” is unaccountably moving. “In California”, meanwhile, has the ravishing gravity of something by Joni Mitchell from the back end of the ’70s – “Paprika Plains”, perhaps?

Newsom will always be a divisive figure, open to accusations of whimsy, and for all the relative directness of Have One On Me, lyrics like “Her faultlessly etiolated fishbelly-face” (from “No Provenance”) will provide bejewelled ammunition for her detractors. To devotees, however, it sounds very much like a second masterpiece: a different kind of epic to Ys, and one with enough hooks and charms to ensnare at least a few Newsom agnostics. Palanquins constructed from naked women? Nothing you couldn’t find in a Lady Gaga video, surely…