The divine Ms Lewis and her beau play pop... 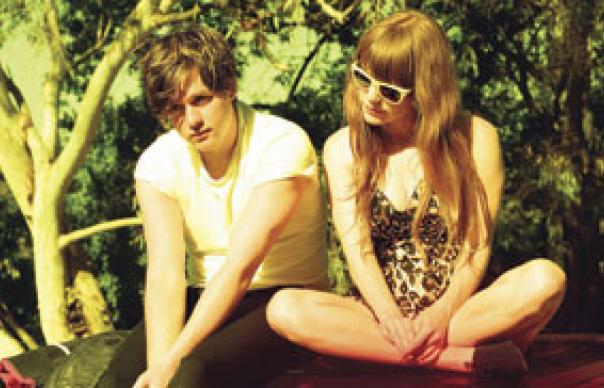 It doesn’t take long to absorb the sherbet rush of this punky confection, but if you’re pushed for time, there is a video for something called the DailyCandy in which Jenny (Lewis) and Johnny (Rice, aka Mr Lewis) introduce their collaboration. It’s an interview in which nothing happens, but it fails to happen quite beautifully. Jenny and Johnny drive around Los Angeles in a $900 station wagon looking gorgeous, like poster people for Vogue’s slacker issue. Ray-Bans are in place, name-studded jackets are donned, and cassettes sorted before they motor off.

But how does it sound? Well, there are clear precedents for this kind of thing; notably The Reivers and Glass Eye, powerpop groups from Texas with boy-girl vocals, but to my ears, both of those groups exude a heaviness that J&J’s blend of razorblade and candyfloss doesn’t possess. What they sound like is the Lemonheads at their fluffiest, if Evan Dando was a girl. And a boy.

At which point, a little background might be required. Uncut readers will be familiar with Jenny Lewis, most notably for 2006’s Rabbit Fur Coat. Possibly because of the influence of her collaborators, the Watson Twins, that record had a sultry twang that isn’t evident in Lewis’ work with her band, Rilo Kiley, or her solo follow-up, 2008’s Acid Tongue.

Lewis’ boyfriend Johnathan Rice is less familiar in the UK, though he spent his teenage years at school in Glasgow, absorbing something of the city’s melodic sensibility. He has released two albums, increasingly collaborating with Lewis. His song “Carpetbaggers” appeared on Acid Tongue.

Seven of the songs on Rice’s 2007 album, Further North, were co-written with Lewis. Neither Jenny nor Johnny quite put it this way, but there is a clear sense that I’m Having Fun Now is a reaction to the fact that Lewis and Rice now find themselves with reputations to live up to. Lewis’ Acid Tongue was recorded as a series of jams, and lacked the coherence of Rabbit Fur Coat.

This album began as a set of experiments, roughly assembled during downtime on Lewis’ 2009 tour. The band barely expanded beyond Lewis and Rice. Rilo Kiley’s Pierre De Reeder engineered the initial recordings, and drummer Jason Boesel filled in where required. Encouraged by the results. Jenny and Johnny decamped to Omaha in their station wagon, to record with Mike Mogis of Bright Eyes. The bumper sticker on the car provided a title for the album, reflecting its carefree nature and, to some extent, its disposability.

Mostly, it’s about the singing. The harmonies are as sweet as mintcake, and Lewis, particularly, seems to revel in the freedom afforded by performing in a combo with no reputation to burn. The songs seem simple, but they’re smarter than the teenage sensibility suggested by the rushing pop of the tunes. On “My Pet Snakes”, Lewis sings “I don’t believe that paradise is lost/I say this with my fingers crossed.” “Big Wave” chugs like The Bangles, but carries a note of trepidation which seems to be targeted at the financial crisis in California, or possibly a sexless relationship. Either way, it’s a toffee-apple of a song – bite through the caramel-coating, and there’s a certain sourness underneath.

Much of it is pure fun. “New Yorker Cartoon” apparently describes an acid trip, with Rice “running from imaginary vampire bats” and “shrieking at the moon while Montezuma laughed”, while “Just Like Zeus” is a cheerleader’s lament, propelled by pure brio. The best song is “Straight Edge Of The Blade”, a gorgeous melody with Lewis taking the lead vocal above a pealing guitar, and lyrics which seem to describe a homoerotic attraction between heterosexual straight-edgers.

Rarely has emotional repression sounded so coy, or so appealing.
Alastair McKay

Q+A Jenny And Johnny
How did this album come about?
Jenny: We went into the studio, but we didn’t tell anyone, so we ended up playing most of the instruments ourselves. We were plugging directly into the board, using pedals and effects we had never used previously. From the first song, it just came back at us and sounded completely different.
Johnny: We’ve both made albums where it was almost as if we were trying to tackle a different genre with every song. These songs were written close together, so the album has a consistent flow.

Was it influenced by The Lemonheads and Evan Dando?
Johnny: When they re-released It’s a Shame About Ray, it reignited our interest in that album. Evan, like me, is obsessed with British music. Jenny always says, for the songs on this record, “That’s one of your British melodies.”
Jenny: Football chant-inspired melodies.
Johnny: Yeah, Jenny’s the only Jewish girl from the Valley who knows Glasgow Celtic football songs…
INTERVIEW: ALASTAIR McKAY