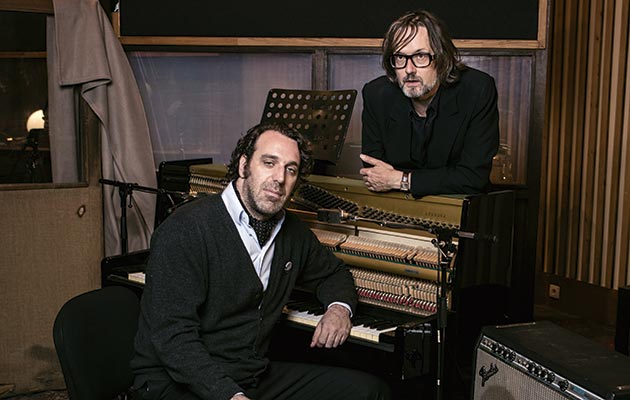 Hotels have long been an essential component of rock’n’roll decadence, and few have such an impressive history of decadence as the Chateau Marmont in Hollywood. It’s where Led Zeppelin drove their Harley-Davidsons through the lobby, where John Belushi overdosed, where Roman Polanski took up residence with Sharon Tate, and where James Dean auditioned for Rebel Without A Cause.

But, for Jarvis Cocker, this hotel is less a home for TV-trashing debauchery, and more a place for quiet introspection. “A comfortable venue for a nervous breakdown/A front-row seat for a psychic shakedown,” he whispers on the opening track of this album about the Chateau Marmont. “Is there anything sadder than a hotel room that’s never been fucked in?”

Cocker stayed here in 2012, while Pulp played Los Angeles on their comeback tour, and became fascinated by the pre-rock’n’roll history of this iconic establishment, which hosted the likes of Howard Hughes and Judy Garland. By the time Pulp had finished the tour, Cocker was researching the hotel’s history and reading up on the myriad movie stars and gangsters of the 1930s and ’40s who had stayed there.

Together with his old friend, the Canadian pianist Chilly Gonzales – and with narration from the film historian David Thomson – he has assembled an album inspired by this remarkable history. With Gonzales’ delicate fin de siècle piano arrangements backed by a string quartet, the result is pitched somewhere between an operetta, a Schubertian song-cycle, a documentary and one of those impressionistic sound collages in the vein of Cocker’s Wireless Nights shows on Radio 4.

Cocker discovered that the piano in his hotel room – Room 29 – was installed there by Mark Twain’s daughter Clara Clemens, which inspires the beautifully tragic music hall song called “Clara”, based on Gonzales’ “Armellodie”, telling of the death of Clara’s alcoholic daughter. Cocker was also astonished to discover that the same room had hosted the honeymoon of the Hollywood sex symbol Jean Harlow and her second husband, the screenwriter and MGM producer Paul Bern. Bern killed himself only weeks later, after failing to consummate the marriage, and that fateful honeymoon is explored in “Bombshell”.

It’s narrated from the point of view of Bern, nervously eyeing his bride (“Eyebrows plucked to nothing, skin as pale as porcelain”) as she emerges from the shower. “It’s hard to hold a bombshell when it’s soaking wet,” Jarvis croaks.

The songs are rich in such Jarvisian couplets. “You are such a jerk,” he croons at the start of the heartbreakingly pretty “Tearjerker”. “You don’t need a girlfriend/You need a social worker.” It’s an album that takes care not to endorse the bad behaviour of the celebrity hotel guest. Where those famous wreckers of hotel rooms, The Who, wrote contemptuously of the “Bell Boy”, here Cocker’s “Belle Boy” is a stoic hero who has to put up with rich, arrogant guests – including one who insists on calling in the hotel attendant while he’s having sex (“He just smiled and kept on going/I guess it got his juices flowing/Playing for an audience of one… and he didn’t even leave a tip”). Set to a strident, Michael Nyman-ish string quartet, it’s one of several songs here that works in isolation, filled with more Jarvisian one-liners. “Life would be a bed of roses/If it wasn’t for all of the pricks/Who wanna take it out on the bell boy.”

Some of the other songs are more tangentially related to the Marmont. A painting on the hotel wall which depicts the biblical tale of Herod and his daughter inspires “Salomé”, a song narrated – hilariously – from the POV of the beheaded John The Baptist. “I don’t know what to do/I seem to have lost my head over you/Now see it rolling on the ground/Beside your feet…”. Where the music elsewhere is curt and minimal, here it’s lush, expansive and hopelessly romantic, with heart-tugging major sevenths and lush strings reminiscent of Burt Bacharach, albeit a Bacharach who has sacked Hal David and replaced him with Ivor Cutler. “There’s my head, tucked under your arm…”

The idea of the “head in the box” shifts the focus from film to television, and “The Other Side” is scathing about the vacuity of contemporary broadcasting. It’s as if the embittered working-class narrator of “Common People” has finally made it into the bourgeois fraternity who run the media and is disgusted by what he sees. “I wannabe where they fill the box,” spits the narrator. “I ended up with a bunch of coked-up public schoolboys/All trying very hard to grow dreadlocks.”

If the album follows a loose narrative, it seems to culminate in “Trick Of The Light”, a dark waltz which discusses how the silver screen, at its best, finds a way of manipulating our deepest emotions. If the rest of the album is meant to sound as if it were recorded in the intimacy of a hotel room, here the song stops, rewinds and is suddenly transformed by a huge symphony orchestra. Cocker describes it as the album’s Purple Rose Of Cairo moment, where the listener suddenly finds himself inside the film that she is watching. It’s a delicious sonic trick in an album filled with similarly delicious moments.

Q&A
Jarvis Cocker
How did you meet Chilly Gonzales?
He supported Pulp at the Eden Project, down in Cornwall, years ago, just before we took a break. Then I chose him to play at Meltdown when I curated that back in 2007, as I loved his first solo piano LP. We bumped into each other on the Paris Metro a few years later, and realised we lived very close to each other. We did a version of a Stephen Sondheim song for the Todd Haynes segment of the film Six By Sondheim, and not long after that I suggested this Chateau Marmont project. What I love about his piano-playing is that it conjures up images of the ’30s, which fitted in perfectly with this theme.

What was the starting point for the project?
It was seeing a baby grand piano in the room that I was staying in. I’d never seen a piano in a hotel room before. Imagine the stories that piano could tell! The Chateau Marmont opened in 1929 and its history was synonymous with the development of cinema in the early days of the talkies. It was also a place where early scriptwriters would stay, and it was known as “the home of the sell out”. In those days, cinema was considered cheap and tacky. When respected writers like F Scott Fitzgerald came to the Marmont to write film scripts, they kept quiet about it.

Who is the film critic who discusses the golden age of Hollywood?
That was David Thomson, who was born in Streatham but lives in San Francisco, and he kindly agreed to be interviewed at the Chateau Marmont for me. I loved his book, The Big Screen: The Story Of The Movies, and his radio series, Life At 24 Frames A Second. He talks about how the movies tapped into these deep desires and dreams that had probably existed in human beings forever, but were suddenly brought to life on a big screen. With cinema, you had to leave the house to bring those desires to life, like going to church or something. For us, the telly was on in the corner most of the day – it’s like those monsters that were unleashed by Hollywood are now domesticated, jabbering away in the corner all day.

“Salomé” sounds very much like a Bacharach song…
Yeah, I thought that, too, when Chilly played me the instrumental. I’ve always loved the songs that Burt Bacharach sings in his croaky, lived-in voice. I prefer that to the amazing soul singers who show off on his songs. With “Salomé”, I wanted to sing something that sounded like Bacharach, squeezing emotion from his limited vocal range. INTERVIEW: JOHN LEWIS