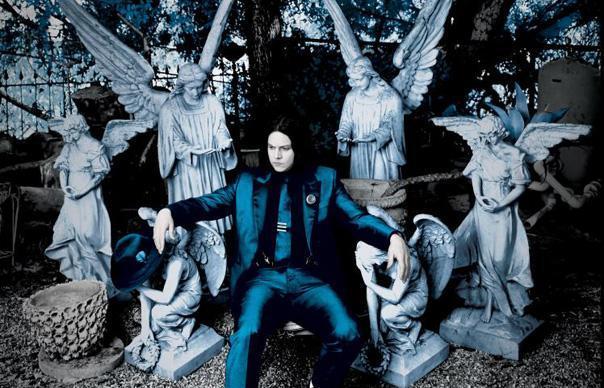 Across Jack White’s prolific recordings over the last 15 years, he’s long demonstrated a keen understanding of the value of an opening salvo. Indeed, it’s hard to imagine the White Stripes’ Elephant blasting off with anything but “Seven Nation Army,” or there being a better summary of (i)Icky Thump(i)’s synthesis of arena-rock crunch and speaker-shredding skronk than its title track.

True to form, White opens his second solo album with another strong hand. A cheeky refashioning of Blind Willie McTell’s “Three Women Blues,” “Three Women” will rankle the blues purists just as surely as the White Stripes’ thrash-metal take on Son House’s “Death Letter” at the Grammys a decade ago. Listeners wary of old-school rock-dude chauvinism may be similarly dismayed. “I got three women/ Red, blonde and brunette,” White sings over the raucous vamping of the Buzzards, one of the two bands that supported him on the tour for his 2012 solo debut Blunderbuss and back him on Lazaretto. (The all-female Peacocks get roughly equal time with White getting additional support by friends like Patrick Keeler of The Raconteurs and The Greenhornes.) After repeating the line, White arrives at the potentially cringe-inducing capper: “I took a digital photograph/ To pick which one I like.”

On first impression, White’s update reeks of the same sexual braggadocio that defines McTell’s original recording from 1928. (Uncoincidentally, Third Man is in the process of reissuing McTell’s complete works.) He certainly risks further umbrage by mentioning the hair colours of his first two spouses. But any suggestion of machismo is undermined by later verses that paint the narrator as bewitched, bothered and bewildered, all qualities unbefitting of a stud. By the end of the song, scrutinizing that photograph comes to seem less like the imperious act of an alpha male and more like a hapless gesture by a man whose life is too unruly to ever submit to his will or his whims.

“Three Women” is hardly the first time that White has presented himself as a man who’s moving as fast as he possibly can yet still feels trapped. It remains a popular motif on Lazaretto, which borrows its name from an archaic term for an island used to quarantine sailors. (A dictionary may be required for several other words in play.)

His songwriting’s propensity for hectic and harried characters is further reflected in White’s public image, what with the demands on his time as a solo artist and sometime sideman, a collaborator and producer for musical legends and upstarts alike, a label boss and impresario for Third Man in Nashville and – since his initially amicable but ultimately acrimonious breakup with second wife Karen Elson – a 38-year-old single dad of two. Surely he’d be forgiven for betraying signs of fatigue but there’s little evidence of mellowing even now, a decade-and-a-half after the White Stripes established its forte for ferocity with its self-titled debut and three years after the duo’s dissolution amid White’s ever-proliferating array of other projects.

In April, White demonstrated that need for speed with a Record Store Day stunt that was one part Kim Fowley to two parts P.T. Barnum. Billed as the “World’s Fastest Released Record,” a live performance of Lazaretto’s tumultuous title track (plus a cover of Elvis Presley’s “Power of My Love” for the B-side) was recorded for a seven-inch single that was mastered, pressed, packaged and ready for sale at Third Man a little less than four hours later.

It’s a testament to White’s talents and multi-tasking abilities that such displays of haste have rarely yielded any waste. Yet even more so than its predecessor, Lazaretto is at its most startling whenever White’s torrents of devilishly clever lyrics and distortion-laden riffage give way to a moment of relative stillness or a hint of inconsolable anguish.

That doesn’t happen often, mind you. As “Three Women” indicates, White spends much of the album in gleeful attack mode, reaching a peak of intensity with the “Kashmir”-meets-swamp-funk of “High Ball Stepper” and a new extreme in lyrical dexterity with “That Black Bat Licorice”, surely the only song to ever combine references to the Egyptian god Horus, a popular home-heating method in ancient Rome and a key plot point in the classic Disney movie Dumbo.

But it still happens. One factor may be the unusual circumstances of Lazaretto’s creation, White having purportedly begun this batch of songs after discovering a trove of short stories and plays he wrote when he was 19 years old. New characters and scenarios were spun out of lines and elements that he found in his juvenilia, which he claims to have destroyed lest they be used in any other way.

Lazaretto was also recorded over a period of a year and a half, an eternity by White’s standards but understandable considering what else was on the man’s plate, such as a divorce battle with Elson and Third Man projects like the enormous Paramount Records box set. Really, it’s a miracle that the album sounds as coherent as it does given the pressures of the period and the many different configurations of personnel.

The songs also share an undercurrent of discontent that’s palpable in even the most seemingly gentle examples. A stately country number that rails against the selfishness of the world’s inhabitants, “Entitlement” concludes with its narrator casting a wary eye on all of mankind and deciding that “we don’t deserve a single damn thing.” A similarly weary and dyspeptic view pervades in the closer “Want and Able” (a companion piece to Icky Thump’s “Effect and Cause”) and many others here, which may be surprising to listeners expecting a more cocksure persona to prevail. Yet it would be foolhardy to interpret the desperation evinced in “Would You Fight For My Love?” or the despair described in “Alone In My Home” as slip-ups by a showman whose bravura can’t entirely conceal his feelings of fragility – White’s far too fond of flipping between voices and perspectives for it ever to be safe to believe that any single character or expression in his songs is any more “authentic” than the rest.

So while Lazaretto may sometimes appear to be a more nakedly emotional collection of songs than we’ve come to expect from its creator, the contents also rate among his wittiest and his wildest efforts to date. In other words, he’s his same old maddeningly inscrutable and compulsively entertaining self.
Jason Anderson

Q&A
Jack White
You recorded the songs for Lazaretto over a year and a half rather than the customary handful of days or weeks. Why the longer gestation period?
Things are different when you’re in a band. When you’re in a band and you’re in motion, you’re constantly thinking of the next step and then the next. That was true when I was in The White Stripes, The Raconteurs and The Dead Weather. This is the first time in my life I’ve been making records under my own name and I’m not under so much pressure to make a next move if I don’t feel like it – you have to make yourself make the next move. This is also a very different time period compared to 10 years ago. I just will put things out whenever they make sense, more so than before. When we made Elephant, we had to wait a year for it to come out because White Blood Cells was doing so well still, they didn’t want to over-saturate the market or something funny like that.

Is it true that the new songs were inspired by a rediscovered trove of one-act plays and stories you wrote when you were 19?
It was just this pile of mediocre writing that I’d done as a teenager. I was about to throw it away but then I thought, ‘What if I pulled characters and lines from these things and put them into new lyrics?’ It was like I was collaborating with my younger self. That was the idea and it really helped inspire me – I definitely get something out of forcing myself into scenarios that I shouldn’t be in!

Blind Willie McTell’s “Three Women Blues” was the springboard for Lazaretto’s opener, “Three Women” – why make your own version?
A friend of mine had heard “Three Women Blues” at a party and I thought it was an interesting song. I had covered Blind Willie McTell songs in the past and I came up with that first line – “I’ve got three women, red, blonde and brunette” – just as a starting point for myself. I thought, ‘I’m gonna do a completely modern version of this type of song.’ It doesn’t really have much to do with Blind Willie McTell’s song at all beyond the first line. I also think his song is a lesson in how it’s all false to begin with, how you shouldn’t believe these are all real events for the songwriter or the person singing. It’s like when Elvis was singing his songs – he didn’t write the songs so they’re not about him. That’s one thing people really get wrong about all the old blues musicians – that every song they were singing was from the heart and about their own specific problems. I highly doubt that Blind Willie McTell had three girlfriends at the same time – it’s hard to pull off for anyone, especially someone who’s blind!
INTERVIEW: JASON ANDERSON