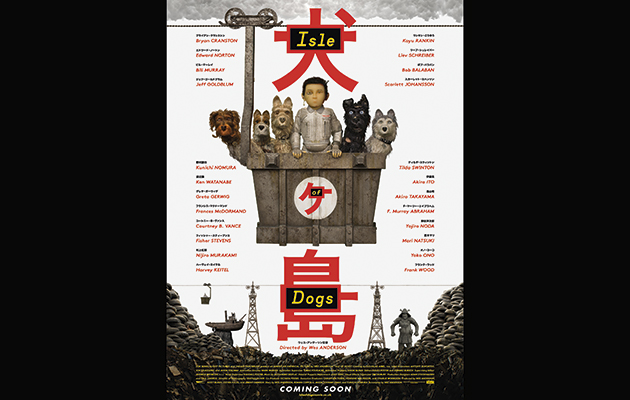 To the many admirers of Wes Anderson, one thing is clear: here is a filmmaker with a scrupulously unsentimental view of pets. You may remember Marmalade, the tabby cat belonging to Steve Zissou, who meets an unfortunate end off-screen at the jaws of a rattlesnake. Or the sleek Persian cat belonging to Jeff Goldblum’s lawyer in The Grand Hotel Budapest – who is off’d by Willem Dafoe’s sadistic henchman. Then there is Buckley the beagle, squashed by a sports car in The Royal Tenenbaums.

Anderson goes some way to compensate for these tragedies to our four-legged friends in Isle Of Dogs – a stop-motion action film set in a dystopian future with a sense of style that offers movement in detail and in quality. We learn that Kabayashi, the corrupt mayor of a fictional city Megasaki has taken draconian measures to curb the spread of terrible canine disease. He has exiled all the city’s dogs to a Japanese island; there, a band of mongrels must survive against infection (from the dreaded “snout fever”) and mechanized canines to reunite a boy with his lost pooch.

The plot is a shaggy dog story in itself: the gang of mismatched mutts marooned on their remote colony is typical of the mini-societies Anderson favours in all his films: the activity-packed school in Rushmore, the undersea crew in The Life Aquatic With Steve Zissou and the Scout gang in Moonrise Kingdom. In this instance, the protagonist is Bryan Cranston’s battle-weary Chief, whose pack includes the voice talents of Anderson regulars Bill Murray, Ed Norton and Jeff Goldblum; there is a love interest, too, in Nutmeg, a tough former show dog voiced by Scarlett Johansson. The sympathetic humans, meanwhile, include Greta Gerwig’s activist and a research scientist, Yoko Ono (played by Yoko Ono).

In many respects, it is a film with agenda or subtext: a splendidly light and warm-hearted romp. But critically, everything you need is up there on screen in its wonderful production design and exquisite animation that draws from Japan’s rich visual arts, from Hokusai to Kurosawa. It is, without doubt, the best film you’ll see all year about a pack of scary, indestructible alpha dogs.