Fierce farce of Whitehall, Washington and warmongering from Armando Iannucci 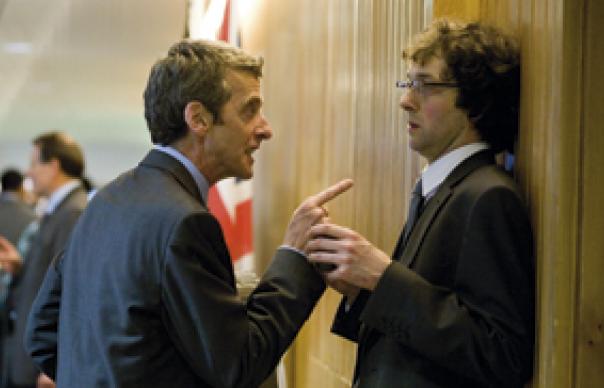 After a junior government minister (Hollander) makes a minor gaffe in a radio interview, questions are asked about the UK’s involvement in a possible American-led war in the Middle East. The Prime Minister’s press co-ordinator (Capaldi) is called in. Things do not go well. There will be blood.

You might wonder just how far Armando Iannucci’s influence reaches into our world. In the 18 years since On The Hour first broadcast on Radio 4, it’s almost impossible to understate his importance on a generation of comedy shows. Arguably, everything from The Office to The IT Crowd, Spaced and even Gavin And Stacey owes him some kind of debt, either stylistic, technical or down the previous involvement of the cast or creators in shows Ianucci has developed.

Equally, it’s still difficult to watch current affairs programmes without seeing the DNA of The Day Today in pompous news journalists, extravagant and pointless computer graphics and the desperate, self-important shriek of the headlines themselves. It’s fair to say, though, that Iannucci and his affiliates have had less luck making it on the big screen.

Steve Coogan, whose Alan Partridge series’ Iannucci co-wrote and produced, has conspicuously failed to replicate his TV successes in movies. Meanwhile, Chris Morris, Iannucci’s other principal collaborator from those early years, has, perhaps inevitably, found his plans for a movie satirising Islamic terrorism enormously difficult to get greenlit. In The Loop, though, the cinematic off-shoot from his political comedy The Thick Of It, may well find Iannucci stealing a march on his former colleagues.

It might become a double victory, too, as Iannucci successfully manages to disprove the long-held belief that TV series never, ever translate to the big screen. In fact, stylistically there’s very little difference, if any, between In The Loop and its TV counterpart. The hand-held, fly-on-the-wall style Iannucci deploys on The Thick Of It (a technique he first used in The Pool, a spoof documentary about a public swimming baths that appeared in The Day Today) is satisfyingly intact here. The only fundamental difference is that the world of The Thick Of It has grown larger. It is still, quite literally, a Whitehall farce; but the production also takes us overseas, to Washington and the United Nations. There, it’s reassuring to report, Iannucci finds plenty of corrosive humour in the build up to a war in the Middle East.

As ever with The Thick Of It, the delight is in watching the meticulously plotted story unravel at breakneck speed. And, as with all great farce, the spark is seemingly infinitesimally small. In this case, it’s one word – “Unforeseeable” – used as a casual answer by Simon Foster (Tom Hollander), the Secretary of State for International Development, when asked in a Radio 4 interview about the likelihood of war in the Middle East.

Foster’s comments are leapt on by the press and the Opposition, much to the dismay of the Prime Minister’s terrifying enforcer, Malcolm Tucker (Peter Capaldi). As Tucker sees it, Foster’s comment is out of step with Downing Street, which is trying to downplay the prospect of invasion while at the same time preparing to support America should war break out. Malcolm is not a man to be messed with – nor, indeed, is his equally terrifying attack dog, Jamie (Paul Higgins) – and Foster’s continued gaffes in subsequent interviews about the government’s position on war leads an apoplectic Malcolm to send him to Washington.

A good thing, from Foster’s point of view, as there appears to be a problem brewing with an angry constituent (Steve Coogan) over a disputed wall. In the States, Foster’s apparent lack of appetite for war is seized by Washington diplomat Karen Clarke (Mimi Kennedy), who’s embroiled in her own battle at the State Department with Linton Barwick (David Rasche), her hawkish opposite number. Clarke’s only ally is General Miller (Gandolfini), who appears similarly disenchanted with the Washington warmongering.

Around them orbit a dysfunctional bunch of assistants and advisors remarkable for being just as stupid, lazy and/or scheming as their counterparts in the British government. There is a dossier, too, about arms in the Middle East, which at least one side wants to doctor. Iannucci’s point, it seems, is that these people can be just as prone to pettiness, feuding and, more pertinently considering the fate of the world rests in their hands, ineptitude as the rest of us. There is, perhaps, a touch of Dr Strangelove here, in the coal-black cynicism and the grim conclusion that inter-departmental power games on this level can, effectively, lead to a real war, in which real people will die.

You might think there would be something terribly parochial about the Whitehall contingent when compared to their American counterparts. But it says much about the skills of Iannucci’s core players – Hollander, Capaldi and Chris Addison, particularly – that they face off remarkably well against the Americans. A third act confrontation, for example, between Capaldi and Gandolfini is equally weighted. Gandolfini himself leads an impressive array of US talent – Rasche, who you might remember from Eighties’ cop comedy, Sledge Hammer!, is particularly brilliant as the Rumsfeldian Barwick – and with a script as strong as this (by regular The Thick Of It writers Iannucci, Jesse Armstrong, Simon Blackwell, Tony Roche, and the show’s long-standing “swearing consultant” Ian Martin), it’s easy to see why Iannucci can attract such a high level of talent. In this department, In The Loop commendably resembles a Howard Hawks-style screwball comedy enhanced with the furious profanities of a David Mamet play.

It’s strange, perhaps, but it’s hard to see In The Loop specifically as a political comedy. In the way that The Sopranos, say, wasn’t really about the Mob after all, so In The Loop isn’t really about politics. It’s a highly moral story about human beings, their failures and inadequacies. In Mamet’s Glengarry Gen Ross, salesman Ricky Roma asks, “A hell exists on earth?”. Iannucci seems to think it does, and it’s name is Malcolm Tucker.