Another step forward for this stately, down-home duo ... 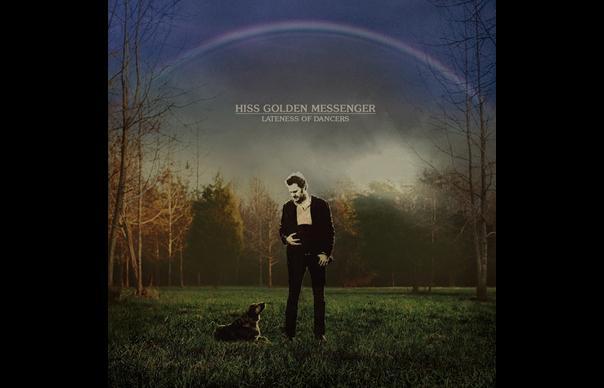 Another step forward for this stately, down-home duo …

Easing yourself into “Lucia”, the opener on Lateness Of Dancers, the fifth album from M. C. Taylor and Scott Hirsch’s Hiss Golden Messenger, is a comforting, comfortable experience – even if the organ riff and drum tattoos might, momentarily, have you flashing back on the J. Geils Band’s “Centrefold”. Acoustic guitars jangle understatedly in the background, the wooden, leaven thunk of the drums plots the course of the rhythm, wah-wah guitar flecks in the sidelines, before Taylor’s voice sidles in: “Lucia’s on the skin of the river, the wise old river.”

In that opening minute, you’ve got as good an indication of the expanse of Hiss Golden Messenger: Taylor’s already signposted the parameters in numerous interviews, where he spills some serious wisdom on his influences, and you can certainly hear the artists he’s mentioned in there, such as Traffic, The Grateful Dead, Ronnie Lane, and Richard & Linda Thompson.

Taylor’s fandom courses through his songs, and it works perfectly until, well, it doesn’t. Americana suffers more than many genres from an overly semiotic turn, each production flourish and arrangement touch signifying back to older, mostly better records. So, listening to Lateness Of Dancers, you can hear, again, the simple, unadorned, folksy lilt of Ronnie Lane and Slim Chance; an upturn in the vocal lilt like Dylan at his least ornery; flourishes that remind of Tom Petty, the Dead circa American Beauty and Workingman’s Dead, or The Band’s self-titled album. So far, so many boxes ticked.

The very good thing about Lateness Of Dancers is that, for significant stretches of the album, it doesn’t matter. “Lucia”’s opening leap and lift frames the album’s heart, a run of songs from the following “Saturday’s Song”, where Taylor really knuckles down and pins to his chest an almost atavistic, rural American vision. “Saturday’s Song” itself builds from understated beginnings to a beautifully scored ending, where the guitar figures that have intermittently punctuated the song form a filigree cascade of notes which recalls, of all things, the psychedelic coda to Shuggie Otis’s “Strawberry Letter 23”.

Move through “Mahogany Dread”, whose bittersweet inevitability, tangles of tremolo guitar, and closely tracked backing vocals trace lines around your ears reminiscent of The Jayhawks’ “Wichita”, and Taylor enacts a kind of unilateral disarmament of his songs. On “Day O Day (A Love So Free)” and the following title track, the arrangements strip things to their very core, “Lateness Of Dancers” peeling back to acoustic guitar, piano, and the buzzing of the outside world, the song’s muted drama underscored by the sudden appearance of backwards guitar, humming organ, and female backing vocals.

From there, Lateness Of Dancers mostly picks up either its pace or its mood, for a run of pleasant, though slightly underwhelming songs, before the closing “Chapter & Verse (Ione’s Song)” and “Drum” float out on acoustic guitars, piano and fiddle, essaying an American variant on Slim Chance’s roots music. While these two songs don’t pack the emotional punch of, say, “Saturday’s Song” or “Lateness Of Dancers”, they sign the album off with grace and understated humour.

But there’s still something nagging away at the back of the mind: Taylor’s very believability. This is neither the time nor the place for an extended riff on authenticity, and yet there are moments on Lateness Of Dancers where it’s hard to take his lyrics seriously, with Taylor singing about leaving his “mandolin in the rain”, or unconvincingly drawling “I might get a little crazy”, as though he’s about to head down the shop for the evening’s supplies.

Perhaps it’s to do with reinvigorating cliché. Those who do this well – Dylan circa The Basement Tapes, for example – inject new life into base material through alchemy. Taylor’s no alchemist – not yet at least – though Lateness Of Dancers suggests he can write songs that transcend the everyday by hymning its subtleties.
Jon Dale

Q&A
MIKE TAYLOR
I’m interested to know what you see as the connective forces across the album – what themes were you taking on?
Part of Lateness is about the lies that we tell ourselves in order to make it through sundown without cracking up or losing control; it’s about making peace with self-deception. There’s a line in “Mahogany Dread” that goes: The misery of love is a funny thing; the more it hurts, the more you think you can stand a little pain. I’m interested in our thresholds, and how we convince ourselves to surpass them. Lateness of Dancers is an album that continues my search for a spiritual home and a position on faith, and reckons with what our obligations are to others and to ourselves.

What did recording in Hillsborough bring to the sessions, and how do you find your environs feed into your work?
The last several albums that we’ve made were primarily recorded in non-traditional spaces, either in old houses or barns. There is something aesthetically and artistically appealing about holing up in a place that feels secluded and cut off from clocks. I knew that Lateness of Dancers was going to be an album for the fall; we recorded it as all the leaves were turning and the air was mellowing, and I worked with Merge to make sure that it was released on the cusp of autumn.
INTERVIEW: JON DALE