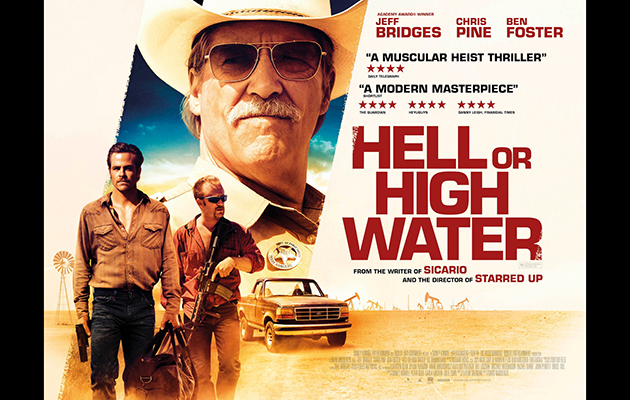 Pitched as a heist movie, David Mackenzie’s latest film feels more like a contemporary Western set in a time of heightened financial anxiety. Rather like Andrew Dominik’s outstanding Killing Them Softly, Hell Or High Water is a film about recession-hit criminals, burdened by reverse mortgage loans and back taxes.

The genre’s classic signifiers are there – Texas Rangers, Comanche Indians, bank robbers – but they have been pushed close to extinction by economic collapse, foreclosures and debt. Chris Pine and Ben Foster play brothers who rob a number of Texas Midland Bank branches to raise enough funds to cover debts incurred by the family farm – debt that is owed to the same chain of banks. It’s a devilish, if grim irony.

They’re pursued by a pair of Texas Rangers – crusty Jeff Bridges and his stoical deputy Gil Birmingham. Mackenzie and screenwriter Taylor Sheridan (who wrote last year’s crime thriller, Sicario) let the film unfold leisurely – though Sheridan sometimes makes his points about the iniquities of the banks a little laboriously.

Pine – rangy, hawk-like – resembles Robert Ryan as the “good” brother, while Bridges is satisfactorily curmudgeonly as the old timer enjoying one last hurrah before impending retirement. It’s hard to find a thread between Mackenzie’s films – from the magic realism of Young Adam and Hallam Foe to the shouty violence of Starred Up. Hell Or High Water, meanwhile, is another career swerve: though it is pretty good.

Meanwhile, Nick Cave and Warren Ellis provide a score that typically shifts between scratchy and twangy.