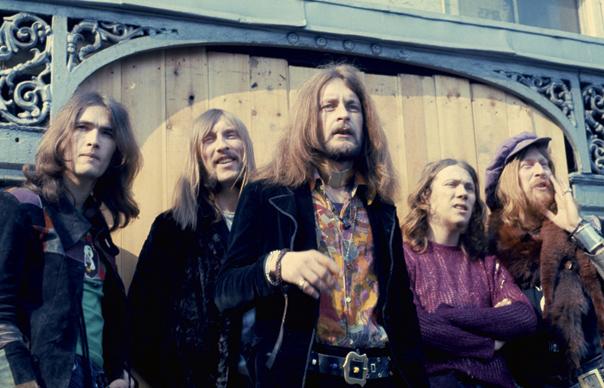 A recent Notes & Queries in The Guardian asked if any band had lasted as long as Hawkwind while having such little success. Hawkwind fans will have spotted the flaw in the question. Because of course there are no sales graphs or probability equations in space; merely spiral galaxies, golden voids and apocalyptic warnings. “Do not panic… small babies may be placed inside special cocoons and should be left if possible in shelters.” For Hawkwind, ‘success’ was getting the drugs over the border.

All the same, there have been important years in Hawkwind’s history, and 1972 was one of them. “Silver Machine” was an unexpected monster hit that summer, and a strong studio album (Doremi Fasol Latido) followed in November. To promote it, Hawkwind unveiled a new live act that combined hypnotic space-rock with a Liquid Len lightshow, a sci-fi storyline and a trio of interpretive dancers, including the towering, topless Stacia. Hawkwind’s line-up – possibly their best ever – comprised Nik Turner (wah-wah sax and flute), Dave Brock (guitar, vocals), Lemmy (bass, vocals), the duo of Dik Mik and Del Dettmar (synthesisers and electronics), thunder-drummer Simon King and the remarkable Robert Calvert, whose chilling announcements were crucial to maintaining a red-alert atmosphere. “Do not panic,” he urged, like a cosmic Corporal Jones. “You have only a few seconds to escape. Use those seconds sensibly or you will inevitably die.” God help anyone who saw the show on bad acid.

The double live album Space Ritual, which celebrates its 40th anniversary this year, was recorded at Liverpool Stadium and the Brixton Sundown in December 1972. Lasting a shade under two hours with bonus tracks, Space Ritual is relentless in its sci-fi metaphor and unflinching in its execution. As one thrilling riff gives way to another – with disembodied voices echoing from the stage – the primitive music induces trance-like pleasure while electronic whooshes create the feeling of unstoppable flight. Brock, Lemmy and King, a rhythm section with not an ounce of virtuosity between them, pilot the vessel like crazed joyriders. It sometimes sounds like Krautrock made by Brits. (Hawkwind, indeed, had links to Neu! and Amon Düül II.) There’s none of that quintessentially English approach to space travel that we find in The Moody Blues or the 1968–9 Floyd. Space Ritual informs us that we’re flying at bewildering speed with no realistic chance of returning home, tells us not to panic, tells us we’re going to die, and takes us on a juddering journey into the psychedelic unknown. As a Hawkwind song title would put it in 1977, we like to be frightened.

An intergalactic proto-punk synth-boogie odyssey, Space Ritual is an album that relies on repetition, oscillation, gradual dropdown, accelerated build-up and sudden attack. That line-up of Hawkwind knew how to do a number of simple things well – with sensory overload its number one objective – and they could repeat the same chords for eight or nine minutes (“Born To Go”, “Space Is Deep”, “Orgone Accumulator”) until it was time to make a decision whether to play the song forever or let it shapeshift into something else. Dik Mik and Del Dettmar were brilliant at this, filling the auditorium with FX-saturated space-noise so that the performance could continue uninterrupted. The song would either mutate into a new riff or into a Calvert interlude, in which he ramped up the dread (“You will feel dizzy! You will feel the need to vomit!”) with the stentorian diction of Jeremy Brett delivering a nuclear warning. In a glorious passage that spanned side three of the original vinyl, the Canned Heat-style “Orgone Accumulator” (propelled by Lemmy’s bass chords) merges into “Upside Down” – a new Brock tune – then segues via Dik Mik and Dettmar into Calvert’s “10 Seconds Of Forever” and finally into a stunning “Brainstorm”.

You can hear Space Ritual’s influence today on bands like Wooden Shjips and Endless Boogie. In Hawkwind’s 40-year flight log, it rightly remains a stageshow – and an album – of legend.
David Cavanagh

Q&A
Nik Turner
How did the Space Ritual come about?
Robert Calvert wrote Silver Machine as part of the Space Ritual – and the success of that single enabled us to mount the Space Ritual. The concept was put together by Robert and (designer) Barney Bubbles: they incorporated the Pythagorean Music Of The Spheres, into the design of the stage, the colours, and how the equipment was painted up. It was a monstrous project, a labour of love.

Was there camaraderie at this stage?
The camaraderie only dissipated with the success. I even got on with Dave Brock at that time. I never aspired to success for Hawkwind, I just thought it was a wonderful thing playing in a band that turned people on and made people happy.
INTERVIEW: JOHN ROBINSON