Gwenifer Raymond – You Were Never Much Of A Dancer

A gorgeous debut of guitar soli: American Primitive via Cardiff and Brighton 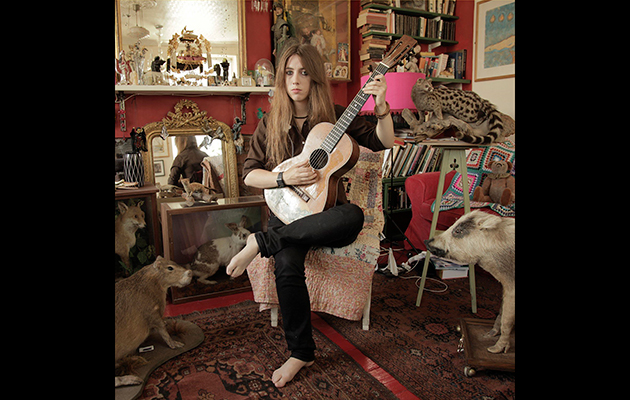 As far auspicious debuts go, British guitar soli slinger Gwenifer Raymond couldn’t have done better: at the urging of label boss Josh Rosenthal, she travelled from her home in Brighton, over to Takoma Park, Maryland, to give her debut performance on American soil, at the Thousand Incarnations Of The Rose festival. Taking place across the second weekend in April 2018, and convened by eminence grise of the scene, guitarist Glenn Jones, the festival was a celebration of everything Raymond holds dear about American Primitive: it could easily have been an intimidating introduction.

For Raymond, though, the experience was freeing. “The first thing I saw when in walking into the backyard of Rhizome (which was hosting the preview show for the festival) was a bunch of guys sitting in the sun and playing old-time on fiddle, banjo and guitar,” Raymond recalls. “It was a scene out of screens I’d watched many times with envy, wishing I could be there, but this time I got to step in. We jammed. It was cool.”

Surrounded both by other players – Rob Noyes, Sarah Louise, Alexander Turnquist, Marisa Anderson, Willie Lane – and scholars of the field, like Steve Lowenthal and Byron Coley, the event was low-key and inspiring: “it all felt pretty inclusive,” she says. “I think most people there were happy to be for once amongst a like-minded crowd – it seemed as though every act on the bill was really excited to be seeing the other players. It was an audience of fans, some of whom stepped on stage.”

It feels particularly important that Raymond’s first show in America was at Thousand Incarnations, as the material on her debut album, You Were Never Much Of A Dancer, betrays a huge debt of influence from the formative players for American Primitive, winding a thread back through John Fahey to Mississippi John Hurt and Skip James. Raymond’s presence, and her seemingly preternatural capacity to channel the music while mutating it, ever so gently, may surprise after you find out she grew up in the outskirts of Cardiff, Wales, “just on the border of the Rhondda valley”.

Coming from an artsy family – a filmmaker for a mother, a father who worked making props – an early, revelatory encounter with Nirvana’s Nevermind led her to ask her parents for a guitar; their record collection, stocked with Dylan and the Velvets, eventually had her exploring pre-war blues, where both Hurt and James grabbed her attention: “they had the ability to make one guitar sound like two or three, over-laying sweet, weird and angular melodies over hypnotic, driving bass lines.”

That’s a pretty good summary of what Raymond does throughout much of You Were Never Much Of A Dancer. After a brief introduction on a rangy, rough-hewn violin, “Off To See The Hangman Part I”, she dives deep into the guts of the guitar on “Sometimes There’s Blood”, which already comes across, this early into her recording career, as a theme song, of sorts. The magic of Raymond’s playing is there, fully formed – a thumb that pumps the bass like a fixated piston; thorny melodies that weave and wind around, taking circuitous and unexpected routes across the fretboard, before a few plucked harmonics ease in the song’s central theme, a swampy, almost dirge-like riff that unexpectedly breaks open and flies skyward on its very final note.

Elsewhere her playing is lighter – her “Requiem For John Fahey” is a lovely, loving remembrance of a musical hero that plays good and loose with some Fahey-esque themes, capturing the core of his mercurial art without coming across as simple mimicry. An evocative player by her very nature, Raymond repeatedly shows that her schooling in American Primitive is in service to a respectful experimental drive that won’t let her take the easy road, an approach that Fahey himself, surely, would have approved of.

When Raymond takes it slow and easy, as on the slide guitar swoon of “Sweep It Up”, her playing is unpretentious and unhurried; elsewhere, and particularly on the clawhammer banjo numbers, like “Bleeding Finger Blues”, she can play at a fierce clip, but she still stays articulate: every note of these gorgeous melodies rings out true. To be fair, there’s an element of You Never Were Much Of A Dancer that feels a little like an index of possibilities, as though Raymond’s setting out what she can do: future albums will, hopefully, be yet more coherent, more conceptually thoroughgoing. But for a first album, it also feels stunningly confident, in full possession of its art. Guitar soli is in very good hands here indeed.

Q&A
It sounds like you had a pretty great time at the Thousand Incarnations Of The Rose festival.
Henry Kaiser gave me one of his guitars. An 1890s model made by Joseph Bohmann, “The World’s Greatest Musical Instrument Manufacturer”. It was the most ludicrously generous act, and I am firmly convinced that this guitar is possessed by some fingerpicking demon or spirit, because when I pick it up I play hard and it sounds real good. I hope to do it justice by the mighty HK.

What do you draw from the guitar soli tradition?
American primitive doesn’t need a singer to tell you what the song’s about, in fact the question ‘What is the song about?’ is pretty nebulous. You draw from this huge wealth of folk music that’s deeply embedded in people’s subconscious, but then you take it in wildly divergent directions, making something that’s familiar and strange at the same time.

I read that you took lessons from a blues guitarist…
He was a local guitar teacher, but I heard some recordings of him playing and it was obvious that his passion was the same sort of blues and folk that I was becoming interested in, which is why I tracked him down. He taught me the alternating thumb techniques used by players like John Hurt, as well as starting me off on clawhammer banjo.
INTERVIEW: JON DALE