Gun Outfit – Out Of Range 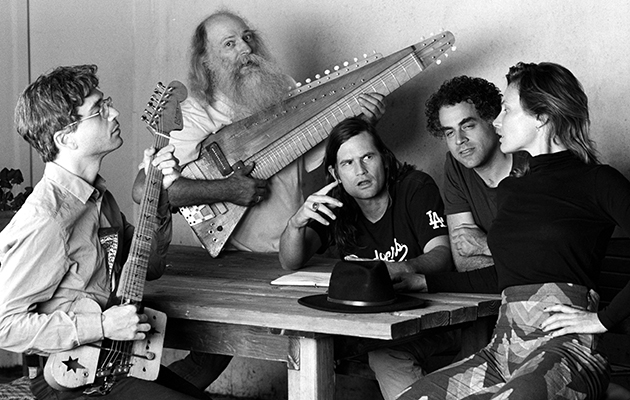 You might want to pick up a guide to ancient myths before listening to the latest Gun Outfit album, which includes songs about Orpheus and Cybele as well as references to “monads”, “viridian”, “hierophants” and “syrinxes”. From Ancient Greece to contemporary California, there’s a fascination with myth and legend on Out Of Range, due in part to co-songwriter Dylan Sharp’s job as a security guard in an art gallery, time that allowed him to gaze upon visual art for six hours a day, and also to contemplate ways of incorporating what he self-mockingly calls “pretentious” references into the band’s fifth LP of cosmic Americana.

Opening song “Ontological Intercourse”, a rough-necked samba, is in part about Orpheus, the Greek “father of songs” who made rocks dance and worshipped only the sun, a heresy that led to his death, while “Landscape Painter” sees Sharp celebrate the work of Brueghel. The myths of drugs and California also feature, and by closer “Second Decade”, he’s exploring the legend of the band itself. “We’re building a labyrinth/And playing hide and seek,” he sings in a self-declared love song to the band he has co-led for 10 years.

Gun Outfit were formed in Olympia when Sharp and co-songwriter Carrie Keith began playing as a duo around the city’s fertile hardcore scene. After expanding to a four-piece and moderating their punky vibe, Gun Outfit released a couple of hard-to-find but well-received albums and then moved to LA where they released two more – the driving Hard Coming Down and looser, atmospheric Dream All Over. They now play as a five-piece following the addition of Henry Barnes, whose homemade instruments (the “sibanjar”, the “springocaster lap-slide”) as well as his mastery of the dulcimer and bouzouki, adds to the sense of mystery that hangs over their music and which Gun Outfit are so adept at exploiting in their more abstract lyrics. It’s Barnes who coined the phrase “western expanse” to describe the band’s sound, a label that hints at both geography and their sense of openness. There are elements of folk and country in their music, but it’s also the sound of the desert, the ocean, the prairie and the loneliness of LA. Within this vibe, there’s little space for the band’s hardcore origins. Instead there’s the sardonic drawl of Silver Jews, the incandescent richness of Phosphorescent, the unsettling dislocation of Lift To Experience and the more adventurous moments of Wilco.

There’s also a diversity that comes from the contrasting styles of Sharp and Keith. Loosely put, Sharp favours oblique non-narrative lyrics with wry asides, while Keith is more direct, both in terms of delivery and content. Keith provides Out Of Range with its sense of momentum, moving things forward where Sharp will circle his themes like a vulture. The clearest example is “The 101”, an ode to the road that took the band from Washington to California. With Barnes playing bouzouki and Keith accompanying her vocal with fiddle, the song sounds ancient even as it picks apart modern LA where “the first lesson you learn is how to project”. “California’s a legend,” she sings, “on the brink of destruction every day”, arcing back to “Cybele”, Sharp’s Ozymandian lament about a lost ancient cult.

Keith is always on the move. Amid the swirling “Sally Rose” she sings, “not gonna run, I’m gonna fly… Quitting all my jobs is good for my career”, while love song “Three Words” has her threaten “and you know in a moment I’ll be on my way”. Sharp, though, is more likely to be chasing his own thoughts. On country rattler “Strange Insistence” he starts by contemplating the perceived outcomes of taking different drugs – “Speed makes you a genius/Cocaine will make you rich/LSD shows you divinity/And everything’s alright on opiates” – before exploring related themes of authenticity and reality, while on the crawl of “Slow Realisation”, he pauses to apologise for his own drift towards abstraction: “Pardon me for the hippie talk…”

On “Second Decade” he abandons that strategy to sing an unalloyed love song for his band, directed at Keith: “Oh my Caroline/Can you believe how swiftly a decade has gone by?”. In the process, he neatly captures the sonic atmosphere of the band – “A simple recollection of the rhythm of waves” – but still finds time to reference Samuel Beckett. It’s a tricky thing to pull off without sounding self-obsessed, but it shows that Gun Outfit can sing from the heart as well as from the brain.