SFA man sees what condition his conditioner’s in... 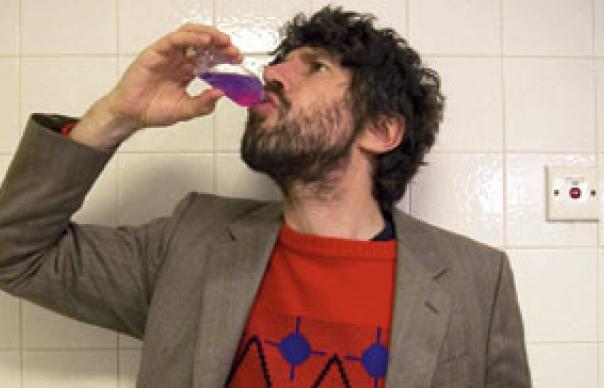 Ever since Super Furry Animals first took to the road in 1995, Gruff Rhys has been collecting miniature bottles of shampoo from hotel rooms around the world, as well as soaps, shower caps, slippers and other paraphernalia of our disposable age. By last year, he’d amassed enough of these complimentary items to build a kennel-like sculpture from them in a Cardiff gallery – a monument to his transient existence.

Hotel Shampoo is the accompanying album, and it’s a typical Gruff Rhys project: seemingly quirky and trivial, but executed with such honesty and dedication that it acquires an unexpected layer of meaning and poignancy. Few artists could have wrung the pathos from a synth-pop concept album about the life and times of disgraced luxury car designer John DeLorean, but Rhys ensured that Neon Neon’s Stainless Style was more than just an exercise in trashy ’80s kitsch. Likewise, his magic realist road trip movie Separado! could have been silly and self-indulgent; in fact it was charming, and taught us a fair bit about the cultural history of Patagonia along the way.

Indeed, faintly psychedelicised lounge pop is generally what Rhys is shooting for here. There are echoes of Gainsbourg’s songs for Bardot and Birkin, Caetano Veloso’s yearning tropicália, The Zombies’ Odessey And Oracle, John Cale’s Paris 1919 and various late-’60s TV theme tunes. The chirpy arcadian stroll of “Honey All Over” seems to deliberately invoke The Small Faces’ “Itchycoo Park”, while “Sensations In The Dark” employs mariachi trumpets with the same cheerful zest as SFA’s “Northern Lites” once used steel drums.

Gruff Rhys says he’s never kept a diary or a journal, so his hotel freebies act as mementos for the places he’s visited, the beds he’s slept in, and judging by the lyrics, the girls he’s shared them with. On the album’s stand-out track, the exquisite “Vitamin K”, Rhys finds that “fragments of the past come tumbling sharply now into focus” bringing with them “gallons and litres of shame” as he wonders if a particular ex-lover even remembers his name.

On “Space Dust #2”, a duet with Swedish singer El Perro Del Mar, the sight of a girl across a seminar hall excites “raindrops and fireworks” but their romance is over by the morning, leaving only embers of recrimination. “If We Were Words (We Would Rhyme)” is a country-ish, waltz-time hymn to the girl who got away.

It’s a pleasure to hear Rhys exploring his romantic side, although the sentimental nature of the subject matter has inspired some rather twee melodies. Keeping Andy Votel on board would have maintained a crepuscular, queer edge to the music, preventing certain songs from lapsing into cosy plinky-plonk.

Rhys has proved his deftness and versatility as a songwriter time and again, but he needs someone on hand to anchor his whimsy. It’s therefore good to learn that, contrary to split rumours, Super Furry Animals will definitely be reconvening in the future. Hotel Shampoo is a fragrant little side-project but it’s a bit too sudsy to be the main event.
Sam Richards


Q+A Gruff Rhys
How much shampoo have you hoarded over the years?
It’s around 574 bottles, plus loads of other items – there’s a full inventory on my website. I started sorting them a couple of years ago at the same time as I was writing this batch of songs, so the two processes became one thing in my mind.

How did your collection of hotel toiletries actually help you write the album?
It became a handy way to finish lyrics or song titles. I had a song about a femme fatale, which became “Honey All Over” – like an imaginary shower gel or something. “Sensations In The Dark” sounds like a shit hair gel.

Did you have an overall vision for the music?
The songs are quite straightforward in terms of composition. I wanted to keep them all as short as possible and try and curb my instinct to go for a 15-minute jam. I was listening to a lot of piano or saxophone-driven records, so this is me getting that out of my system.

What’s the latest on the next Super Furries album? We heard a worrying rumour last year that you might have called it quits.
No, we made a pact on the last song of our first album [“For Now And Ever”] never to split up. We’re just taking our time. I think we’re at our best when we make completely over-the-top records where we spend six months in a studio and make a film as well. Three of us have got young families so when we’re all free and able to give it 100 per cent, that’s when we’ll go for it.
INTERVIEW: SAM RICHARDS