Big on tunes. Big on ambition. Beth Ditto is coming for you 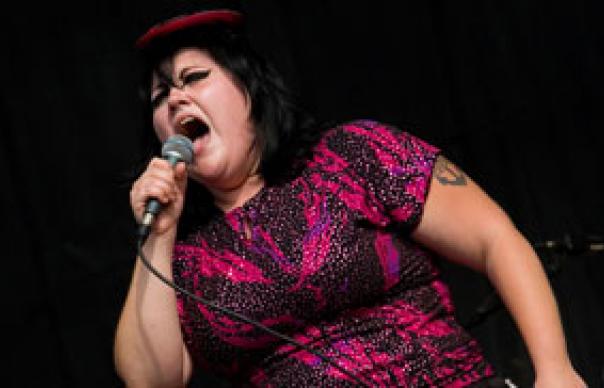 It’s one thing to be a fanzine-scene punk darling, another to be an indie icon, and still another to be a full-blown global pop star. Beth Ditto will soon be one of the few individuals lucky enough to have experienced being all three. From the first note of Music For Men – a clomping hoof of a drumbeat that leads like a beckoning finger into the slinky, country-tinged “Dimestore Diamond”– it’s clear that this is an album with a mission. Consider it a resounding rebuttal to anyone who suspected that The Gossip might be a one-hit-wonder whose long silence in the wake of their 2006 dancefloor-devouring gay-rights anthem “Standing In the Way of Control” was down to the fact that they simply didn’t have any more good songs. Brace yourselves, naysayers, for a tour de force.

Of course, there’s nothing like making your major-label debut with an esteemed production wizard at the wheel: Rick Rubin, the bearded bear-man who has previously worked with everyone from the Beastie Boys to the Red Hot Chili Peppers to Johnny Cash, has been trumpeting his love for The Gossip since her first saw them play in 2007, and he clearly knew what buttons to push – figuratively and literally – to bring out their best. Brace Paine’s guitar sounds like it could saw through marble; Hannah Blilie’s drumming crashes and booms with concussive force; and while there’s no denying that Ditto has one of the best soul-punk set of pipes on the planet, she really goes to town here, unleashing a Janis-Joplin-meets-Dolly-Parton vocal wallop like a woman with a horsewhip. They make use of all the tricks at their disposal, too – layers of synth, plinkety pianos, the punctuating “oohs” and “ahhs” of backing vocals – all of which take them far away from the stripped-down blues punk that defined their sound when they emerged on the Olympia, Washington riot grrl scene a decade ago.

Considering the insular guttersnipe punk community that bred them, making such an explicitly, joyously pop record as Music For Men is a bold move, but not – as will no doubt be suggested – a cynical sell-out.
It’s more of an elevation, a demonstration of just how high a band can fly if they liberate themselves from expectation. After all, as Ditto herself has intimated, when you’ve got something you want to say, you’re much more likely to be heard if you’re standing on a platform rather than still mucking about in the mosh pit.

Not that there are many “message” songs here. If there’s a “Standing In The Way Of Control” part two, it’s “Men In Love”. Echoing Aretha Franklin’s “Chain Of Fools,” Ditto scolds “shame, shame, shame” over a Duran Duran/Nile Rogers-esque bass-line that blossoms into an irresistible chorus of “Na, na, na/Men in love/Na, na, na, na/With each other” (which should summon even more straight boys onto the dancefloor than Franz Ferdinand’s “Michael” did a few years back). More than anything else, the album’s theme is love, and the myriad way it can both fuck you up and turn you on: these are defiance-in-the-face-of-heartbreak anthems to out-survive Gloria Gaynor. In “Long Distance Love,” Ditto quotes “I Heard It Through the Grapevine” and sings like Roberta Flack in a punk-disco inferno, “Breaking up or breaking down/When I need you you’re not around.” “Love and Let Love” and the “Billie Jean”-ish “For Keeps” are feather-boa-waving break-up kiss-offs, and in “Four Letter Word,” the closest the album comes to a ballad, Ditto declares “I never want to see your face again,” and “love is a four letter word that should never be heard,” over pulsing ’80s-inflected synths and a shuddering glitterball beat.

It’s “Pop Goes The World”, though, which could be read as The Gossip’s mission statement for 2009. “For once we’ll do what comes naturally…with no apology,” Ditto proclaims, “goodbye to yesterday/because they know we’re here to stay.” The larger-than-life frontwoman, with all of her glorious contradictions – she’s a feminist who gets her kit off for magazine covers (and, occasionally, in front of startled audiences); a lesbian whose love for girly makeup and having cool young fashion designers worshipping at her stiletto-clad feet knows no bounds; a former hardcore kid who just made the disco record of the year – appears to have arrived at her vindication. After all, isn’t doing whatever the hell you want to do the most punk thing of all?