GILLIAN WELCH – THE HARROW AND THE HARVEST

This is a reaping song! Eight years on from Soul Journey, Welch and David Rawlings return with another timeless country classic... 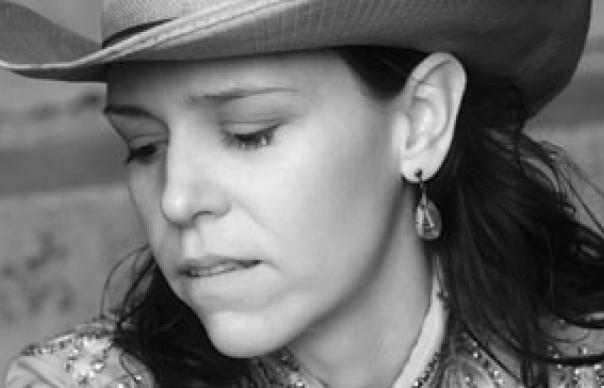 This is Gillian Welch’s first album since 2003, a stretch even by her famously languid standards. She hasn’t been entirely idle during this vexingly interminable interlude – she’s toured a lot, sung backing vocals for The Decemberists, Bright Eyes, Norah Jones and Tom Jones, among others, and made a record with career-long collaborator David Rawlings (The Dave Rawlings Machine’s 2009 album A Friend Of A Friend), which permitted her sideman to take centre stage.

The Harrow & The Harvest is her most ruggedly traditional work yet, pared to the fundamentals of Welch’s voice, guitar and banjo, and the harmonies and guitars of Rawlings. There is nothing on The Harrow & The Harvest that couldn’t theoretically have been recorded in one take on a back porch, perhaps overlooking a vista of tumbleweed and rusted tractor hulks. So studied is the record’s aura of ascetic simplicity that the harmonica that gusts across “Six White Horses”, seven tracks in, sounds scarcely less extravagant in this context than a children’s choir, marching band and/or Tchaikovskyian deployment of artillery.

This should not, however, be construed as a characterisation of The Harrow & The Harvest as an abrasive essay in lo-fi retro. Though there is little here to produce, and what little there is has been produced to a high sheen. Not once in 10 tracks of often mesmerisingly intricate picking is there a buzz of string on fretboard, or squeak of finger on string – and though Rawlings is an exquisitely clean player, nobody gets it that right the first time. Not once in 10 songs of often profound desolation is there a remotely strained vocal – Welch’s voice is kept well within its (admittedly considerable) range. Moments of spontaneous rawness are few – a knuckle tapping on a guitar to illustrate a line about knocking on a door in “Scarlet Town”, a (gently) half-yodelled coda on “Silver Dagger”.

Such an approach bespeaks iron-clad confidence in both the material and the means of its delivery. Such confidence is, inevitably, abundantly justified. On her 1996 debut, Revival, Welch’s voice sounded immediately commanding and distinctive, and it needed to. Welch faced not only the cruel attritional mathematics of her ambitions – female singer-songwriters are to the music industry what conscripted infantry were to the Western Front circa 1915, legions herded to near-certain oblivion in the faint hope that the swift or lucky might get through. She also had to stare down the lemon-sucking sentinels of the authenticity police, whose mirthless sensitivities were inflamed by the sound of a woman from Los Angeles performing songs gestated in the Appalachians.

All that (still) needs to be said on that score is that Ryan Adams, Steve Earle and Emmylou Harris have all been happy enough to sing with her, and little wonder. On subsequent albums Hell Among The Yearlings, Time (The Revelator) and Soul Journey, Welch’s voice yielded ever more astonishing riches, an instrument blessed with the gentle husk of Cowboy Junkies’ Margo Timmins, the easygoing warmth of Rosanne Cash and, when she needed it, the keening reach of the old-school country divas.

Welch flaunts this latter aptitude just once on The Harrow & The Harvest, on the song “Dark Turn Of Mind”, a fabulously wretched torch ballad, like something Willie Nelson might have written for Patsy Cline. In general, however, her delivery is restrained, even decorous. It’s an approach that risks rendering the record too tasteful for its own good, but it works, encouraging and rewarding repeated hearing. “The Way It Goes” knowingly updates on the hillbilly misery ballad tradition, acknowledging the eternal qualities of The Louvin Brothers’ gothic fairytales with a cast of more modern horrors (“Becky Johnson bought the farm/Put a needle in her arm…”). “Hard Times” strips what could have been souped up into a surging gospel epic back to Welch’s knelling banjo; possibly counter-intuitively, it sounds all the more affirming for it. And long-time live favourite “The Way It Will Be” – also known as “Throw Me A Rope” – is finally incarnated as a frail folk ballad, Rawlings’ obvious debts to Richard Thompson paid off with this poised homage to Fairport Convention.

The Harrow & The Harvest crests on two brooding epics at its centre, “Tennessee” and “Down Along The Dixie Line”, consuming a quarter of the album’s 46 minutes between them. The titles alone demonstrate that Welch has (quite rightly) long overcome any hesitation about helping her Californian self to the traditions of her adopted South, and the songs suggest that she gets it much more acutely than many country acts whose chief qualifications are the redness of their neck and the blueness of their collar. “Tennessee” is a bluesy confessional of self-destruction (“Of all the little ways I’ve found to hurt myself, you might be my favourite one of all”) which borrows from Tex Ritter’s “Rye Whiskey” (“Beefsteak when I’m working, whiskey when I’m dry, sweet heaven when I die”). “Down Along The Dixie Line” quotes from the Confederate anthem “Dixie”, but does so with a mournful understatement comparable to Mickey Newbury’s handling of similar material in his original take on “An American Trilogy”. It’s a lament for things passing which might never have been in the first place, a subtle expression of a specifically Southern affinity with lost causes –“They’ve pulled up the tracks now/I can’t go back now”.

There has been a minor – though welcome – trend in recent years of gleaming modern production techniques and lyrical sensibilities being brought to bear on music which has endured essentially unaltered for more than a century: the Rick Rubin-produced American Recordings series made by Johnny Cash in the last years of his life can claim much of the credit. The Harrow & The Harvest is kin to not dissimilar works by Uncle Earl, Crooked Still, Kate Fagan, even Steve Earle’s rumbustious bluegrass outing with Del McCoury – and blessed by the insuperable advantage of Welch’s voice. It ends on the bleakly hilarious “The Way The Whole Thing Ends” (“That’s the way the cornbread crumbles”), leaving the listener feeling – and not for the first time – that the only thing wrong with a Gillian Welch album is that she makes so damn few of them.
Andrew Mueller