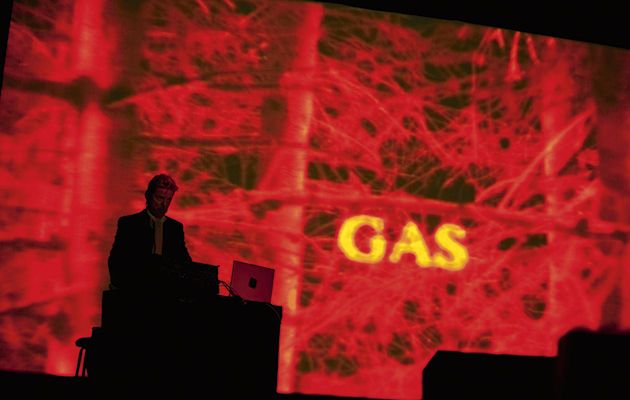 It’s been 21 years since Wolfgang Voight released his first Gas EP, “Modern”, and in the 16 years since the project’s last album – 2000’s (at least partially) ironically titled Pop – the German has resurrected the moniker only once: for a 2014 remix of The Field’s “Cupid’s Head”. Axel Willner’s shoegaze-meets-techno project may boast a significantly more upbeat, melodic style, but the Swede shares the same love for dense, shifting soundscapes and rigid rhythmic cycles. Box now provides proof of their common methodology with this overdue opportunity to immerse oneself in three of Gas’ four albums, plus a long-out-of-print EP, “Oktember”. This time, they’re just as Voight always wanted them heard, their 250 minutes of music spread generously – and unedited – over 10 LPs (and 4CDs).

Perhaps the Gas moratorium came about because Voight had achieved everything he could under the alias. He’s been far from unproductive under the other 30-plus pseudonyms he’s employed, but Gas’ aesthetic, while in some ways limitless, was in other senses highly restrictive. Tracks were built ostensibly out of only two key elements: almost impenetrable mists of drones constructed from unrecognisable, looped samples, and a strict 4/4 beat that changed only by drifting in and out of the mix. Imagine Seefeel’s Quique, produced by Brian Eno, mixed with Kevin Shields’ ear for detail, and conserved as successfully as William Basinski’s The Disintegration Loops. You’re about halfway there.

Nonetheless, Gas’ four albums and two EPs have proved to be enduring (if often unavailable, and certainly on vinyl), their influence audible in huge swathes of ambient electronica, minimal techno, and beyond. Part of this may be the mythology that surrounds them: Voight’s intention was to recreate, wordlessly, the adolescent acid trips he had taken in the Königsforst, 7,500 acres of woodlands outside Cologne, his hometown (the forest lent his third album its name, and photos grace this extravagant boxset’s artwork and book). Certainly there’s a suitably giddy, hallucinatory feeling to much of Gas’ output, as though one were wandering, disorientated, through shadowy panoramas. But, remarkably, it’s rarely claustrophobic, the opaque textures slowly revealing, magically, their light and shade.

This gradual sense of revelation is reflected in Gas’ musical development. Each album has its own characteristics, with Voight lowering himself through the twilit haze of 1997’s Zauberberg into the murky, nocturnal, labyrinthine Königsforst (1999), only to emerge into the more spacious, luminous realms of Pop (2000). 1999’s long lost Oktember EP meanwhile tweaks the formula, with “Tal 90” almost euphorically boundless and “Oktember” contrastingly unsettling, like techno heard from the bottom of the ocean. To borrow from the occasionally similarly inclined My Bloody Valentine, Box’s contents are soft as snow, but warm inside.