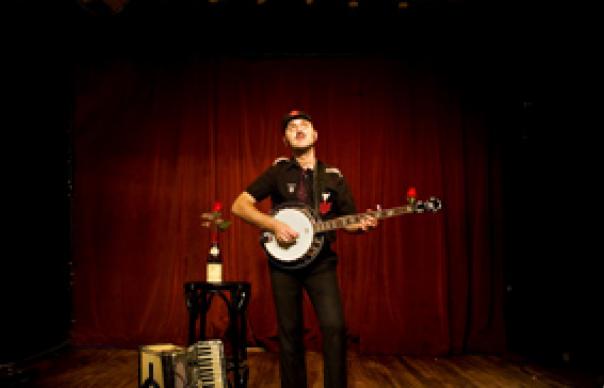 You may recognise Franz Nicolay from band photographs of The Hold Steady: he’s the dude who plays the keyboard and looks like an exuberant French baker. Yes, Nicolay is a man of distinctive appearance – half-cocked beret, Dalí moustache, occasional goatee – and his first solo album exudes a suitably exuberant self-confidence. Few side projects have as much character as the witty and full-hearted Major General – Nicolay sounds like he’s been itching to bust out on his own for a while.

He self-produces as well, and takes the calculated risk of starting with his most immediate song, “Jeff Penalty”, a riot of a rocker about seeing a Jello Biafra-less Dead Kennedys in “the greatest karaoke show that I had ever seen”. It’s witty and touching (“I’m sorry Jeff whatshisname if we didn’t take you serious/but the punks all still sang along when we got to the chorus”) that has some of the flavour of the Drive-By Truckers’ early standout, “The Night GG Allin Came To Town”.

The danger is that after an opener this strong, all else will feel limp, but with the listener firmly behind him, Nicolay knows he has the chops to sustain their interest. “Jeff Penalty” shows that Nicolay is a natural nostalgic and “World/Inferno vs The End Of The Evening” covers similar territory, a wry country-rock waltz that resembles Joe Ely and recalls past nights on tour through the haze of false memories.

Fine writing, then, and there’s musical variety, too. From the jagged gypsy polka of “Dead Sailors” to the Cole Porter-shuffle of “Do We Not Live In Dreams”, there’s also some HS style rock: the ballsy “The World Is An Open Door”. But it’s in rewriting his personal history that Nicolay excels – “Confessions Of An Ineffective Casanova” is a jazz-punk roll call of wild seductions. By contrast, “Cease-Fire” is a tender study of punk rock love told against the backdrop of low-key finger-picking. Let’s hope he’s got enough biography left over for the follow-up.