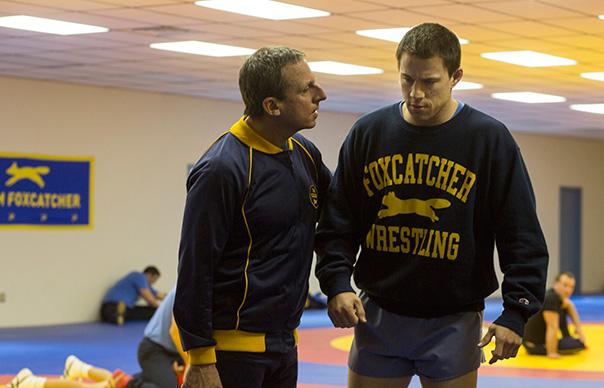 In director Bennett Miller’s last film, Moneyball, Brad Pitt played Billy Beane, the real-life general manager of the Oakland Athletics baseball team who turned round the fortunes of his impoverished club. Foxcatcher is similarly based on a true event in sporting history; in which John DuPont (Steve Carell) bankrolled America’s national wrestling team to win gold at the 1988 Seoul Olympics. But while Beane was a star player gone to seed who acted from entirely philanthropic means, DuPont’s motives, however, are entirely different.

DuPont lives on Foxcatcher Farm; the sprawling Pennsylvanian seat of the DuPonts, one of America’s richest families. DuPont lives there with his cantankerous mother (Vanessa Redgrave) and a number of deep-rooted personal issues. Meanwhile, up in Wisconsin, we meet wrestler Mark Schultz (Channing Tatum), who won a gold at the 1984 Summer Olympics but his edge has since dulled: he lives alone, living on a diet of Pot Noodles and computer games, earning cash by giving inspirational talks at local schools. Critically, Mark lives in the shadow of his elder brother Dave (Mark Ruffalo) – another Olympic gold medal-winning wrestler, who is considerably easier-going than his brother, and enjoys a happy life with his wife and small children. DuPont convinces Mark to move to Foxcatcher and help him assemble a wrestling team to complete first in the World Championships and then the 1988 Olympics. But DuPont is surreptitiously using Mark to lure Dave – the greater athlete – along.

Miller’s film is often unsettling – and although it’s hard to like, it has much to commend it. Principally, it is anchored by terrific performances from Tatum and Ruffalo. As Mark and Dave, they share a profound brotherly affection for one another, but once at Foxcatcher find themselves experiencing conflicting emotions, both towards one another and towards DuPont. They have a long, shared history of emotional repression caused by a difficult upbringing; and as Foxcatcher progresses, their personal rivalries assert themselves. Meanwhile, Carell’s plutocrat is an extraordinary figure. Lonely, tetchy and arrogant, he is used to getting what he wants, and although he aspires to be like Dave – well-liked, successful on his own terms – he identifies more closely with Mark’s frustrations and anxieties. A self-proclaimed author, ornithologist, philanthropist, world explorer – and “golden eagle of America” – DuPont is a dangerous, delusional man. Not that you’d know it at first: buried underneath a cavernous prosthetic conk, Carell is entirely unreadable.
Michael Bonner