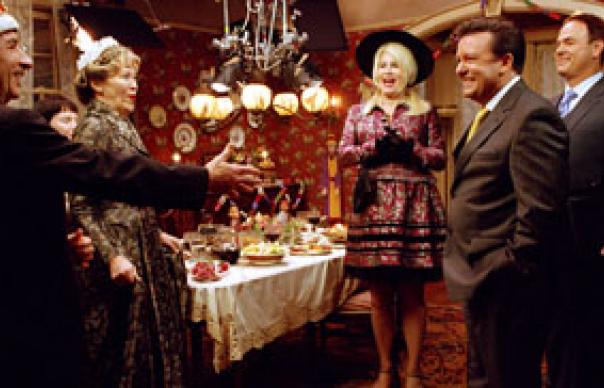 PREVIOUS satirical offerings confected around the Christopher Guest/Harry Shearer/Michael McKean axis have targeted dim heavy metal musicians (This Is Spinal Tap), hopeless small-town repertory thesps (Waiting For Guffman), weird dog obsessives (Best In Show), querulous folk singers (A Mighty Wind), and the vacuous milieus in which these creatures function. In For Your Consideration, they turn upon dim, hopeless, weird, querulous Hollywood actors, and the backdrop of glittering bullshit that constitutes their habitat – and, once again, dispatch their slow-moving target with graceful ruthlessness.

For Your Consideration shares with its predecessors a method (a script, in this case by Guest and Eugene Levy, heavily embellished by improvisation), much of a cast (regulars Parker Posey, Catherine O’Hara, Jane Lynch, Bob Balaban, the reliably godlike Fred Willard, this time abetted by a cameo from Ricky Gervais as a heroically unctuous studio boss), and the sureness of touch that comes of knowing, even quite liking, the subject of one’s scorn. It differs, however, by ditching the familiar mockumentary format – For Your Consideration is a straightforward narrative comedy.

It takes place on the set of an underthought, overacted melodrama, Home For Purim, whose cast – rather bafflingly – become the subject of rumours regarding Academy Award nominations (the title is taken from the oleaginous plea traditionally attached to trade press advertisements touting Oscar hopefuls). From this premise unspools a gleeful burlesque of modern celebrity and the media that amplifies it – an industry in which people who don’t really care report on things that don’t really matter for the diversion of people who don’t really think.

The chief victims of this snowballing imbecility are the stars of Home For Purim, Victor Allan Miller (Harry Shearer, with the not inconsiderable assistance of a rack of sensational prosthetic teeth) and Marilyn Hack (Catherine O’Hara). Both are middle-aged mediocrities, who become plausibly and touchingly dazzled by the chimerical hope that their deluded dreams might, at last, be redeemed. The hollowness of their ambition is cutely but cruelly emphasised by embodying the acceptance they crave in hyperactively inane Hollywood reporter Chuck Porter.

The attention of Porter, rendered by an inevitably show-stealing Fred Willard, inflates Miller and Hack to grotesque proportions, and when it all goes horribly wrong, he is merciless in batting them about as the hot air hisses out of them again. The scenes in which Porter interviews – that is, talks unstoppably over the top of – Miller and Hack are beautifully observed illustrations of a modern media environment in which everyone wants to be heard, however little they have to say, but nobody wants to listen.


PLOT SYNOPSIS
The set of independent film Home For Purim is gripped by rumours of Oscar nominations for various cast members. As the buzz swells, so do the egos of all concerned – in particular those of journeyman leads Victor Allan Miller and Marilyn Hack. The actors, studio bosses and Hollywood media all become progressively more convinced that glory awaits, despite the self-evident hopelessness of the movie in question. The consequences are not distinguished by dignity.