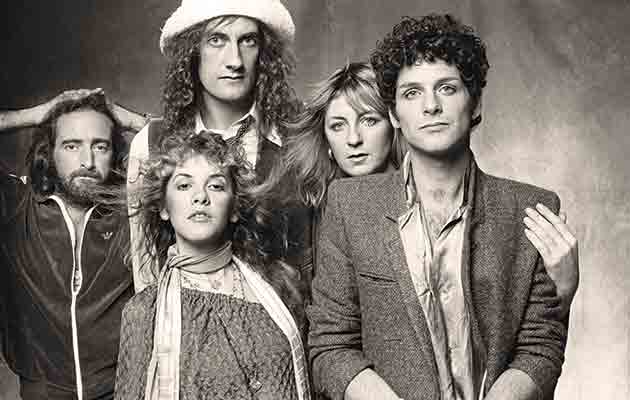 Few multi-million-selling albums, grounded so thoroughly within the MOR landscape, puzzle more than Fleetwood Mac’s 1979 double album Tusk. The stories of its reception are well known. After the wild success of Rumours, the five-piece, led by the songwriting trio of Lindsey Buckingham, Christine McVie and Stevie Nicks, and completed by rhythm section John McVie and Mick Fleetwood, refused to rest on laurels – especially Buckingham, who’d been listening to post-punk and new wave, later telling Uncut that this new music had offered him “a little room to deprogram and reaffirm things – to retrieve my own style”.

The outcome was ten months in the studio, costs of around one million dollars, and an album that McVie herself once described as “very different, very Lindsey Buckingham”, and which Buckingham recently told critic Jen Boyles was “the most important album we made, but only because it drew a line in the sand that for me defined the way I still think today.” But painting it Buckingham’s baby (soon after its release, when it was clear it wouldn’t repeat the success of Rumours, it was referred to as ‘Lindsey’s folly’) does grave disservice to the group’s two other songwriters, who met Buckingham’s experiments with more subtle, yet no less effective, sideways steps.

On Tusk, McVie embraced an ambiguity that she never quite articulated before or since: the album’s opener, “Over & Over”, begins as though it’s suspended in mid-air, a music always in the process of becoming, while the song’s protagonist sketches out uncertain emotional territory. Nicks contributes the album’s most resonant, Mac-esque songs – several of her classics appear on Tusk, including the breathtaking “Sara” (which gains a few minutes of aquatic drift on the alternate version on Disc Three of this deluxe edition, more of which later), and one of her most epic melodramas, “Sisters Of The Moon”. But it’s fair to say the album’s legend rests on the wildness of Buckingham’s experiments, such as curiosities like the taut elastic snap of “The Ledge”, or the modular drum tattoos of “Tusk” – the album’s most experimental song, it was, tellingly, released as the lead single.

From here, the deluxe edition stretches out, firstly with a disc of single versions, remixes and studio sessions. The former are flotsam – truncations or minor alterations that ultimately flag how deceptively consummate Tusk really is, as a strongly conceptualised, archly constructed double album. More compelling are the studio sessions, particularly when we reach Buckingham’s material, from a bluesy twist around “Out On The Road”, which would eventually become “That’s Enough For Me”, through to multiple versions – six of “I Know I’m Not Wrong”, five of “Tusk” itself – from sessions across 1978 and 1979.

The various takes of “Tusk” simply further unveil the borderline-ridiculousness, and thus the heroic hubris, of the song. Charting the progression of “I Know I’m Not Wrong”, however, through its various forms, from scratchy demo through off-the-cuff guitar-and-drums performance, to its more considered iterations, suggests the group relished the potential to rewrite and rebuild in the studio. The third disc, which features an alternate Tusk constructed of session outtakes, proves this – “What Makes You Think You’re The One”, for example, missing the chord at the beginning of the chorus that pivots the song into next gear, is a much looser performance, with Buckingham’s vocals strained and stretched.

A common theme from the alternate mix is one of Tusk denuded. An acoustic “Storms”, Nicks swooning between two glinting guitars, is gorgeous, and suggests that a stripped-back Fleetwood Mac album would have offered plenty; the subtle reveal of McVie’s “Honey Hi” is stealthier, the alternate version mustering its melancholy energies from piano and a twitching, Lissajous-curve guitar figure. “Angel” is far more intimate than in its final manifestation, with a tart, stinging guitar highlighting Nick’s understated vocals; “Sisters Of The Moon”, on the other hand, floods the sensorium with waves of organ and guitar, draping the song with even more lustrous fabrics.

If you splash out for the five-disc set, you also get two discs of previously unreleased live material from the ’79/’80 Tusk Tour, mostly drawn from shows at Wembley, Tucson and St Louis. Cherry-picking from Tusk and Rumours, with a few outliers, these are strong performances, but they add little when it comes to illuminating the intrigue of Tusk-era Fleetwood Mac. And that’s, ultimately, where this deluxe edition comes unstuck. There was a fine opportunity here to really delve into those storied sessions, to pull together, and subsequently pull apart, the mercurial magic of this music, to show the breadth of experiment and risk undertaken, and to detail just how the album’s peculiar, light-dappled production came about.

That’s not to sneeze at what we have here: the studio sessions on the second half of Disc Two, and the alternate Tusk of Disc Three, much of which was previously unreleased, is plenty illuminating. But Tusk is strong stuff, surprisingly unyielding in its intrigue. As a document of a group responding to mega-success by both experimenting wildly, pushing the studio-as-instrument to places that usually only an Eno would go, and by introverting in response to Rumours’ interpersonal melodramas, it’s still a bristling, staggering listen.