The Lips continue to explore the joy and sadness of existence 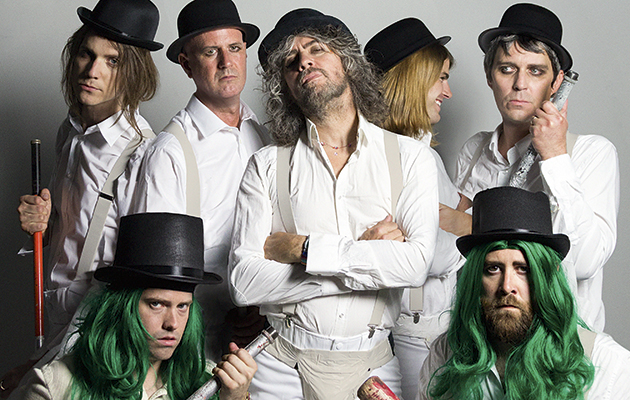 Throughout their 30-year career, but especially in the last decade, the Flaming Lips have made self-indulgence a virtue. They’ve recorded a 24-hour song, covered full albums by The Beatles and Pink Floyd, released music via giant gummy skulls, and – perhaps most notoriously – recorded an album with Miley Cyrus, which they released for free but couldn’t give away. That playful unpredictability is compelling even when the music is not. And most of the time it’s not. These projects tend to work better as stunts and happenings, which means they’re probably more fun to create than they are to hear.

But that only makes their studio albums somehow miraculous. Embryonic in 2009 and The Terror in 2013 stand among the band’s finest releases, each expanding the Lips’ candy-coated psychedelia while balancing the extreme whimsy and extreme melancholy that have become the band’s signature. Long after several generations of contemporaries have folded or flopped, the Flaming Lips are still writing the story of their career, adding some essential and entertaining chapters.

Oczy Mlody is perhaps the inevitable outcome of the Lips’ endearing self-indulgence, combining the best and worst traits of their main and side projects into a concept album that is sure to be divisive even among their diehard fans. There are unicorns and demon frogs and wizards and rainbows, guest spots by Cyrus and the comedian Reggie Watts, and instrumental interludes that sound like Pink Floyd got chopped-and-screwed. At times it dares to reach for beauty; often it settles for a strained frivolity.

Musically, the Lips claim they were inspired by Syd Barrett and A$AP Rocky; lyrically, by a Polish translation of Close To Home, a novel by Erskine Caldwell (most famous for Tobacco Road). The details of that book have nothing to do with Oczy Mlody. Instead, the Polish language, with its logjams of consonants and curlicue ogoneks, provided the foundation for the lyrics and concepts. Wayne Coyne would scan the pages, his eyes catching on unusual clusters of letters and his brain translating the strange words into skewed fairy tales. Hence the title: Oczy Mlody translates into English as “eyes of the young”, but it translates into Coynese as a futuristic drug that allows users to sleep for three months at a time. Or something like that.

“There Should Be Unicorns” offers the most concrete evocation of this world and its strange rules, with Coyne painting “day-glow strippers” and “edible butterflies” into the landscape like Bob Ross on ’shrooms. The music is never as animated as the lyrics, and the lyrics sound more juvenile than usual, especially when the fantastical intermingles with a real-world problem like police brutality. There’s nothing on Oczy Mlody that is any more or less silly than Yoshimi battling those pink robots or that Christmas skeleton pleading with a suicide bomber, but there’s no metaphorical underpinning to give emotional weight to so much whimsy. The unicorns are merely unicorns.

At least on the first half of the record, the instrumentals are more compelling than the lyric-based songs, mixing the Lips’ familiar psychedelia with beats and hip-hop production techniques. The opening title track in particular evokes the mood of a particularly bittersweet fairy tale, pitting bottom-heavy rhythms against delicate synth melodies. As the album progresses, however, it accrues gravity and import – a particularly puzzling magic trick. “Do Glowy” is a zero-gravity boudoir slow jam, “Listening To Frogs With Demon Eyes” a seven-minute mini-opera whose creepy-crawly sound effects and stargazing lyrics conjure an almost pagan ambience.

“The Castle” is all metaphor: a painfully detailed portrayal of how a fragile soul processes tragedy and pain, inspired by the suicide of a close friend. “Her brain was the castle,” Coyne sings, “and the castle can never be rebuilt again.” Here the imagery not only has poignancy and emotional heft, but makes that personal loss sound incalculable. That’s the underlying theme of this record, which is strange even for the Lips: the thin veil between existence and oblivion, a mortal dread so intense that it pervades every single bubbly note on these songs. Oczy Mlody continues the Lips’ longstanding mission to explore the joy and sadness of simple human consciousness, so that even when the album loses its footing – which it does, often – it never loses its way.

Q&A
Wayne Coyne
Which comes first: the songs or the concept?
These things never come as an idea. It’s almost as though something happens and it leads to another thing happening and before you know it, you’ve got something really magical. One song gives you another piece of an unknown story.

How did that process work for Oczy Mlody?
The very first track on the record, called “Oczy Mlody”, had been around for a while. Steven [Drozd] and I kept going back to it. It had a mood to it, but we didn’t know what to do with it. Then we stumbled upon “The Castle”, which I wrote after a session one night, just singing into my phone. I liked that idea of singing about the castle as the structure of your beautiful life or whatever. I filled the song with lyrics that hint at the fairytale world – unicorns and stuff like that – which really hinted us toward a new flavour that the Flaming Lips hadn’t really explored before.

How did that change “Oczy Mlody”?
We started to tie the two songs together. Oh, Oczy Mlody is a drug you take in this futuristic fairytale world. It just kept going from there, the same [way] we would have hit upon concepts for all our records. It feels like we’re making the soundtrack to a movie. We have characters and locations and moods and things that are happening. It helps us feel like we’re in the same story, even though we’re not sure what happens.
INTERVIEW: STEPHEN DEUSNER