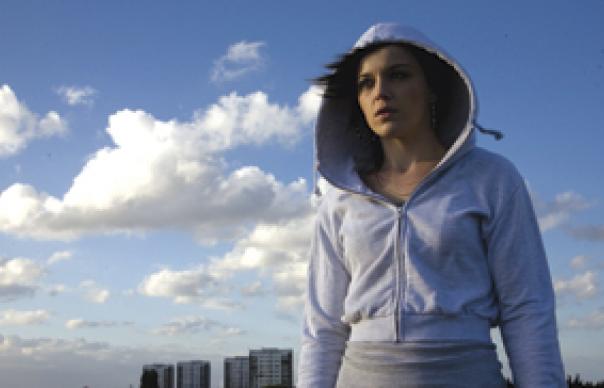 On an estate in Essex, the life of bored teenager Mia is transformed when her mother brings home a new boyfriend, Connor. Connor takes an interest in Mia’s dream of becoming a dancer, and introduces her to new experiences, but as their friendship deepens, Mia finds herself questioning his motives.

Andrea Arnold is not a conventional storyteller. She has said, of Fish Tank, that it began with a single image, and grew from there. She didn’t say which image, and you could submerge yourself in its bleak vision of the Essex wastelands for a considerable time without encountering anything that was conventionally beautiful.

True, there is a white horse, tethered by gypsies in some scrub-land by the ring road, that the central character, Mia (Katie Jarvis) visits, as an escape from her loveless life on an estate with her feckless mother, Joanne (Kierston Wareing), and her little sister, Tyler, (Rebecca Griffiths).

And yes, late in the film, as the sense of aimlessness sharpens to something approaching tragedy, there is a breathless scene in which Mia runs through autumnal wheat fields. (Needless to say, the beauty is short-lived, and she arrives, rather fatefully, at a sandless beach, as if the land has run out with her luck). There are moments, too, of athletic grace, as Mia dances in an abandoned flat to her Discman; and a closing image, of a floating heart balloon, which does little to dispel the sense of emotional agoraphobia which has spooled out over the previous two hours.

Arnold has been over this terrain before, of course. Her Oscar-winning short, Wasp, depicted a similarly bleak life on a council estate. Her 2006 debut feature, Red Road (which, like Fish Tank, won the Jury Prize at Cannes) was compared to Michael Haneke’s Hidden, though the comparison was never precise. Haneke is a clinician of human cruelty who wraps his narratives in a structural criticism of cinema. Arnold’s films are more obviously in the tradition of social realism.

They’re not kitchen sink dramas, exactly, but they have much in common with the work of Ratcatcher/Morvern Callar director Lynne Ramsay (whose use of non-actors was borrowed from Robert Bresson and Bill Douglas). Arnold’s focus on working class characters has also earned comparisons with Alan Clarke. And it’s true, if you strip out the comedy, there are some odd echoes here of Clarke’s taboo-crossing Rita, Sue And Bob Too. Ken Loach isn’t far away, either, though Arnold is more interested in emotions than ideology.

The beginning is not propitious. The opening scenes, with angry texting, and girls fighting in a playground on an estate, watched over by tattooed boys, may be intended to set up the hopelessness of 15 year-old Mia’s surroundings, but the taunts of “skanky faggot!” and “cunt!” veer uncomfortably close to dumb nihilism. It might be realistic, but it’s not a place you really want to linger in.

But that mood soon passes, largely due to the performance of Kate Jarvis, a non-actor cast by Arnold after she witnessed her arguing with her boyfriend in an Essex railway station. It would be patronising to say that Jarvis isn’t acting, but Arnold’s direction produces a performance with no artifice. If Jarvis was self-conscious, it doesn’t show, possibly because her character is introverted to the point of anger, rarely opening up to emotional risk. When she does, the results are far from joyous, though the beauty of Arnold’s film is that it never judges the actions of its characters, or offers moral comfort to the audience.

What it’s about is hard to say. This is fuzzy terrain. It is about adolescence, and a teenage girl experimenting with womanhood. It is about emotional neglect, and non-nuclear families, and lives lived on the margins of the margins. It is almost about dancing, which offers Mia a sense of freedom she doesn’t get from anything else. But it’s not Billy Elliott. It’s clear, to everyone except Mia, that the audition she dreams of is a false horizon.

It is, in a strange way, a love story, and a sensual one at that. Mia’s life is turned upside down by the arrival of her mother’s boyfriend, Connor (Michael Fassbender, who played Bobby Sands so memorably in Steve McQueen’s Hunger). Connor is a playful soul, and charismatic, though his initial pleasantries are countered by Mia’s blunt refusal to engage with him, or anyone. “Are you always such a donkey knob?” she asks.

But the aggression is designed to conceal her growing fascination. When her mother holds a party, and Mia is banished to another part of the house, she experiments with make-up and vodka and is almost unconscious when Connor carries her back to her bedroom. The atmosphere in the room carries a heavy charge, and is quite discomfiting. Mia is awake, and secretly enjoying the attention.

Yet Andrea Arnold’s direction is not straightforward. In this moment of adolescent longing she gives the camera a restricted view, bathing the room in red light. The sound drops away to leave nothing but anxious breaths: watching it, you are made to feel like an intruder. This scene, at least, has the unsettling aura of Haneke, as it simultaneously tempts and repels the viewer. And the sense of voyeurism continues when Connor loans Mia his camcorder, so she can film herself dancing.

To test it, she films him changing his shirt. If he feels this is inappropriate, he doesn’t mention it. Instead, he sprays himself with cologne, and leans towards her, asking her to inhale his scent. “Fox piss,” she says. Then, in an action that is suddenly strange and jarring, Connor treats Mia like a little girl again, and spanks her.

And so, the relationship develops. Connor brings Mia out of herself, and takes her out of her claustrophobic surroundings. Technically, what is happening is rape, but Arnold’s direction is so empathetic that it only feels slightly wrong, and faintly taboo. Then, reality bites.