Back to Alan Lomax’s Dixie – with a subtly understated agenda 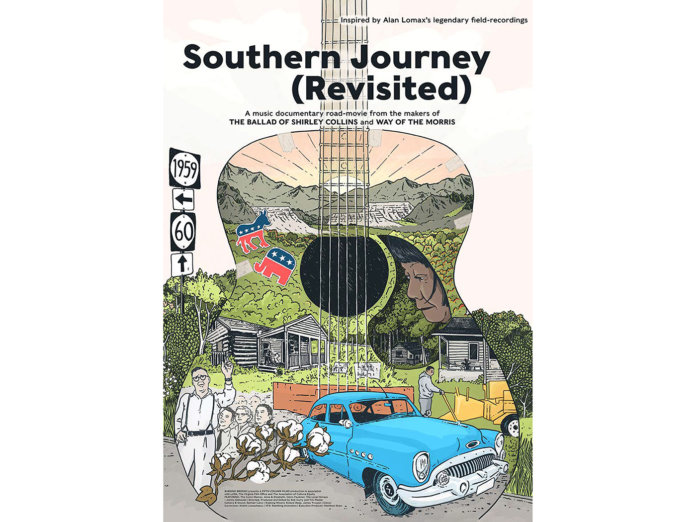 The original Southern Journey was a schlep undertaken by the American musicologist Alan Lomax in 1959. He and his then partner, English folksinger Shirley Collins, lugged an Ampex 601 reel-to-reel recorder though Virginia, Kentucky, Alabama, Mississippi, Tennessee, Arkansas, Georgia and North Carolina, collecting performances by church choirs, jug bands, chain gangs, barroom warblers, front-porch crooners and assorted other guitar-pluckers, harp-blowers and banjo-botherers. Lomax and Collins’ recordings were – and are – astonishing, a glorious trove of treasures hauled from the deepest recesses of the collective national memory. There was gold indeed in them thar hills.

Southern Journey (Revisited), a film by Rob Curry and Tim Plester, is first and foremost a retracing of Lomax and Collins’ steps. Curry and Plester have form here, having previously made the 2017 documentary The Ballad Of Shirley Collins, released around her comeback, aged 82 and after a 30-year silence, with the startlingly vigorous Lodestar. They head for the Deep South using America Over The Water, Collins’ account of the original Southern Journey, as a guidebook.

There is, inevitably, more going on with Southern Journey (Revisited) – or so the directors hope – than a mere re-beating of Lomax and Collins’ path. Southern Journey (Revisited) is a contribution to the already considerable canon of journalism and art hoping to understand and/or explain the rages, manias and follies of those portions of America – Virginia, Kentucky, Alabama, Mississippi, Tennessee, Arkansas, Georgia and North Carolina prominent among them – who decided, in November 2016, to take their country’s chances with a manifestly unqualified real estate grifter turned gameshow host.

This impulse has resulted in some great work – one thinks of Sarah Smarsh’s fine memoir Heartland, or Drive-By Truckers’ seething The Unraveling. It has also resulted in quite a lot of the kind of expedition which has become derisively known in journalism as the Cletus Safari, as big-city reporters venture briefly into the boondocks, scare up a few picturesque yokels, diligently stenograph an amount of paranoid whining, and serve it up to their readers as reassurance that none of this is their fault.

Southern Journey (Revisited) is very much fit to be bracketed with more thoughtful recent explorations of the heartland. Set against the backdrop of the 2018 midterm elections, in which Republicans across the United States were dealt quite the kicking, it takes a wilfully unobtrusive approach – the people Curry and Plester meet along the way are encouraged to tell their own stories, and sing their own songs. The picture that emerges will ring true to anybody who has visited these places – the locals are far smarter than often given credit for, unaffectedly proud of their traditions, and more or less bottomlessly hospitable.

The film also finds that the music means no less, and sounds every bit as fine, as Lomax and Collins discovered – and the film meets people who recall meeting those original explorers, back in 1959. If anything fundamental has changed since then, it’s a heightened awareness among people of the South of the low opinion of them often held elsewhere. One of Curry and Plester’s subject reflects on how the only media they usually see only want to ask them about Trump. Another smiles wryly – yet affectionately – at the “hipster doofuses” who descend from time to time to record the gospel singers. It says much about the filmmakers’ – merited – confidence in their work that they left that in.