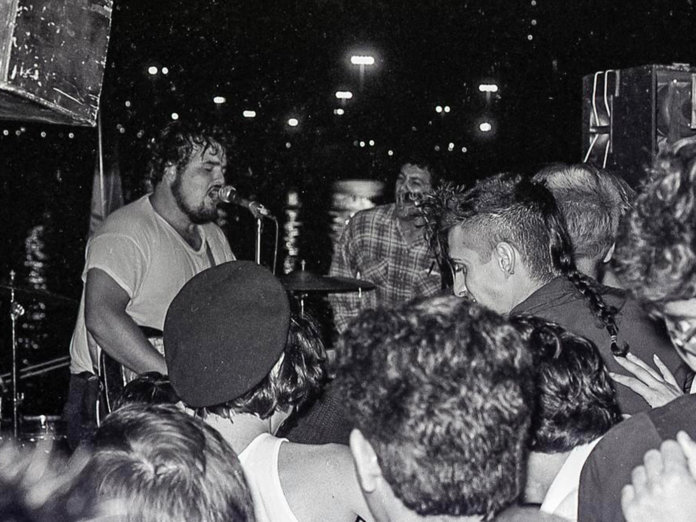 Screaming over the primitive chug of “Flower” as demented-looking hobbit people cluster around in the middle of the California desert, Kim Gordon screeches out the song’s bad-hippie mantra: “The word is ‘fuck’.” Deep into their Charles Manson trip as they made their West Coast debut at the Gila Monster Jamboree on January 5, 1985, the Sonic Youth captured in shaky footage in Stuart Swezey’s Desolation Center look like they are performing an occult ritual rather than an off-grid rock show.

Struck by the idea of “putting on shows as a form of artistic expression”, the 20-year-old Swezey started seeking out under-the-radar venues to avoid the attentions of the weirdo-averse LAPD. This documentary mixes footage and memories from the five events his Desolation Center collective staged between 1983 and 1985, as they put art firmly before commerce. Selling beer to turn a profit was a no-no (“alcohol brings cops,” Desolation Center wrote in their founding manifesto), while audiences were expected to have the right kind of fun: “No dancing. We would rather shut down than become a New Wave Disco.”

For their first adventure, the collective bussed around 200 Los Angeles hipsters into the California badlands to watch the Minutemen play as the desert wind whipped sand into their faces. Barely able to open his eyes, singer D Boon has a certain irritable tone as he introduces the band’s set: “Here we are in the godforsaken Mojave Desert. In a fucking riverbed.”

Such a hostile environment was better suited to Einstürzende Neubauten, stars of Desolation Center’s March 1984 extravaganza. The extreme metalworkers’ Alexander Hacke loved the wasteland backdrop: “In a spot like this you can reach a much higher level of concentration and a much higher level of communication between the performer and the audience because there’s less distractions.” However, a show that involved an attempt to blow up a mountain, and misanthrope Boyd Rice having concrete smashed up on his stomach, was as much about destruction as creativity. As scenester Janet Housden puts it: “People in their twenties are sociopaths.”

For their next trick, Desolation Center had the Minutemen and SST labelmates performing on a pleasure boat circling San Pedro harbour, but the Gila Monster Jamboree felt like their grandest success, a $400 fine for trespassing on the site failing to kill the collective’s righteous buzz.

The fun drained away, though, when D Boon died in a van crash in the aftermath of the final Desolation Center show, a Swans/Sonic Youth warehouse clank-athon on December 21, 1985. Swezey moved on, satisfied his “punk rock field trip” concept had “stayed pure”, but his sometime roommate Perry Farrell kept the idea on file for the Lollapalooza extravaganzas he organised with Jane’s Addiction from the ’90s onward. But if Swezey’s shows created a blueprint for Burning Man and Coachella to perfect after the Sonic Youth-led grunge assault turned indie losers into commercial contenders, his film celebrates less hard-headed times. As Gordon howls into the darkness at the Gila Monster Jamboree, success looks a lot like survival.