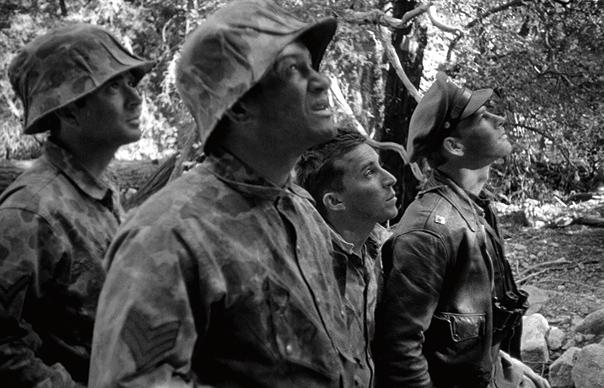 “A very inept and pretentious effort” was Stanley Kubrick’s own verdict on his debut feature, a film about four soldiers trapped behind enemy lines. In later years, he sought to distance himself from the movie and did nothing to encourage its distribution. This remains his least seen feature.

At the time he began work on the project in late 1950, Kubrick was heavily in thrall to Italian neo-realism. He recruited his friend, the young Greenwich village poet Howard Sackler (later to win a Pulitzer Prize for The Great White Hope and to script Jaws 2) to write the screenplay.

Sackler and Kubrick both took the project incredibly seriously. Fear And Desire isn’t burdened by levity or humour. The story, Kubrick told the press, was about the soldiers’ “search for the meaning of life and the individual’s responsibility to the group.” What makes the film so fascinating 60 years on is the way it anticipates his later, more celebrated movies.

The young Kubrick’s perfectionism, self-belief and unlikely flair for marketing were already in evidence. He was, as The New York Times described him before he had even shot the movie, “a young man from the Bronx with a passionate interest in photography and a determination to make a name for himself in the movie world.”

The 22 year-old director had already established himself as a photographer. True, unlike the Italian filmmakers he so admired, he knew little of war and poverty. True, he wasn’t a member of a union and was effectively making his film as a guerrilla effort – early 1950s New York’s answer to Dogme. Nonetheless, this “adventuresome young man,” as The New York Times called him, knew exactly where he was going. He raised the money largely from family and friends, found the locations (in California), cast the actors (including a young Paul Mazursky) and soon he was shooting what was initially known as Shape Of Fear.

In this case, Kubrick’s lack of resources was almost a blessing. He wanted to oversee every aspect of the production and ended up producing, shooting and editing the film as well as directing it. He had enough swagger to get away with his own pretentiousness and enough craftsmanship to make his movie look professional.

“There is war in this forest, not a war that has been fought or one that will be but any war. The enemies who struggle here do not exist unless we call them into being,” begins the film’s absurdly pompous voice-over. We see images of forests and then home in on the four soldiers, adrift in the big bad woods – “six miles behind the enemy lines.”

When you watch Sam Fuller’s war pictures, whatever the circumstances in which they were made, you know that Fuller – a veteran of Omaha Beach – knows his subject matter at first hand. By contrast, Fear And Desire is a formal exercise from a director who has never been near the battlefield and doesn’t understand the psychology of soldiers. What you also realise is his formal mastery. Whether it’s his use of Gerald Fried’s brassy score and voice-over or the montage sequences showing a girl being shot, or the beautiful way he shoots the raft drifting down river, or the ruses he uses to make sunny Californian forests seem menacing and oppressive, his virtuosity as a storyteller isn’t in doubt. The laconic, self-deprecating humour here (“there’s nothing so refreshing as an afternoon out of doors in enemy territory”) anticipates Colonel Kilgore’s witticisms in Apocalypse Now.

Just occasionally, the film lurches toward the crudest melodrama. There is an absurd scene in which the soldiers kill a group of enemies and immediately sit down to eat their stew. The references to The Tempest grate. Kubrick’s own remarks about the film, which finally secured distribution in 1953, seem horribly pretentious. He loftily described his debut feature as “a drama of ‘man’ lost in a hostile world – deprived of material and spiritual foundations – seeking his way to an understanding of himself.”

Kubrick was to return to military themes in films from Paths Of Glory to Dr Strangelove and Full Metal Jacket. These movies had a maturity and a sense of irony that Fear And Desire conspicuously lacks. Even so, Kubrick’s perspective never really changed. That fascination with the pathos, squalor and absurdity of war was there right from the outset. It’s what makes his debut feature so strange and unsettling in spite of all its affectations.