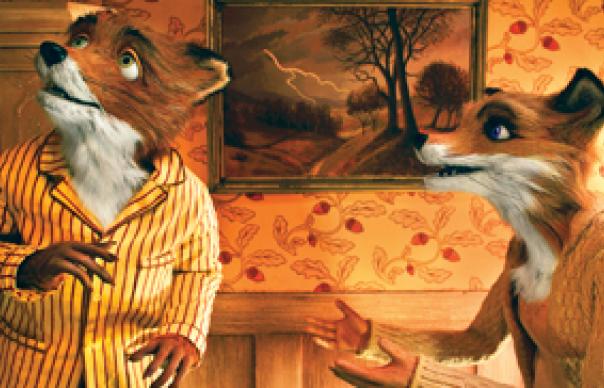 Mr Fox moves his family into a new home on land near mean-spirited farmers Boggis, Bunce and Bean. When Mr Fox launches a series of daring raids on their farms, the farmers respond by declaring war on Mr Fox. Enlisting the help of other countryside animals, our wiley vulpus vulpus hatches a plan to rob the farmers of their entire food stocks. Things, inevitably, do not go according to plan…


It takes a certain kind of person to get where Wes Anderson is coming from. Here, after all, is a filmmaker who’s spent much of his career making quirky, sophisticated comedies about unconventional dreamers and dysfunctional families like Rushmore, The Royal Tenenbaums and The Darjeeling Limited, films that are stylistically idiosyncratic to the point of polarising audiences. You might have cause to wonder, then, what on Earth he’d have to bring to Fantastic Mr Fox – a children’s book, no less, written by Roald Dahl.

In fact, there’s plenty that’s familiar here to fans of Anderson’s films. We have an eccentric father figure who’s maybe not quite the Alpha Male he imagines himself to be, a calm, well-centred matriarch, a child prodigy, and plenty of squabbling sibling rivalry. Meanwhile, the cast list is filled with many of Anderson’s regular associates – both Jason Schwartzman and Bill Murray play major roles here, and there are cameos from Owen Wilson, Willem Dafoe, Adrien Brody and Roman Coppola.

The script is by Anderson and his The Life Aquatic… With Steve Zissou co-writer, Noah Baumbach and there are chapter headings, too – “Cousin Kristofferson Arrives”, “The Terrible Tractors”, “Mr Fox Has A Plan” – a device he used before in The Royal Tenenbaums. You may even find some parity between Jarvis Cocker’s guitar-playing henchman, Petey, and Seu George’s Bowie-singing safety expert aboard the Belafonte in The Life Aquatic. In short, anyone concerned the director might have compromised his singular vision should be reassured – so far, so Wes, really.

What’s different, of course, are the bristles, fur, textiles, fabrics, buttons and wood Anderson’s team of craftsmen have used to bring his take on Dahl’s story to life through the laborious process of stop-motion animation. But that forensic attention to detail in the film’s look is, in itself, yet another typical Anderson trait. Here, you might easily find yourself marvelling at a helicopter shot of a spread of fields, all immaculately woven together from different types of fabric like a patchwork quilt, or admiring the incredibly meticulous detailing on the characters’ clothes.

The colour palette, meanwhile, is as heavily stylised as his last film, The Darjeeling Limited – a warm, autumnal mix of reds, browns and oranges replacing that movie’s peacock fan of blues, green and golds. More often than not, Fantastic Mr Fox resembles a high-budget update of British children’s programmes from the ’60s and ’70s like Pogles’ Wood and Bagpuss. Home-made and hand-made, all arts and crafts; peculiarly English, in other words.

So, yes, it’s a Wes Anderson film. With puppets! Really, what’s not to like? In fact, it only really deviates from Anderson’s established template in one respect – the character of Mr Fox (Clooney) himself. Usually, Anderson’s patriarchs are weary and melancholic like Steve Zissou, or duplicitous and dysfunctional like Royal Tenenbaum; all of them struggling, to some degree, to connect with their extended families.

Mr Fox, on the other hand, is brash, tenacious and super-confident – a do-er, in other words. Certainly, it’s hard to imagine any of Anderson’s other male leads having the cojones to behave as Mr Fox does. Here’s a character prepared to take on against the odds three angry farmers and their evil henchmen – all of them heavily armed, it should be said. But Mr Fox, in his own way, is troubled by the same kind of existential doubts that afflicted Tenenbaum and Zissou: “How can a fox be happy without a chicken in its teeth?” he muses darkly at one point. And when Mrs Fox angrily asks him at one point, “Why did you lie to me?” He replies: “Because I’m a wild animal.”

George Clooney, of course, can do brash, tenacious and super-confident (oh, and charming) while standing on his head. And he does it here with great warmth (and charm). Meryl Streep, as Mrs Fox, is a fine variant on the kind of part Anjelica Huston’s played previously in Anderson’s films while Bill Murray’s badger is, well, Bill Murray-ish and Jason Schwartzman revisits the sulky persona he adopted for The Royal Tenenbaums and The Darjeeling Limited.

It’s perhaps difficult to know how all this will play out with the kids, admittedly. Anderson’s humour is typically droll, the characterisations arch. If the younger audiences are to connect with anyone here, you’d assume it might be Ash, Mr and Mrs Fox’ son. But Ash is a typically Anderson character – a bundle of neuroses, in other words.

He harbours dreams of being an athlete, but his shortcomings are painfully shown up when compared to his visiting cousin, Kristofferson, who seems to be pretty much brilliant at everything. Ash is jealous – but this being a Wes Anderson film, he’s jealous in a deadpan sort way, of course. When Kristofferson appears to be cracking onto Ash’s lab partner at school, a sort of indie female fox, Ash petulantly remonstrates her: “You’re supposed to be my lab partner.” “I am,” she replies. “No you’re not,” says Ash. “You’re disloyal.” This, clearly, is not Toy Story.

Coincidentally, Anderson isn’t the only filmmaker to tackle a much-loved children’s book – later this year, we’ll see Spike Jonze’s version of Maurice Sendak’s Where The Wild Things Are, adapted by Jonze and novelist Dave Eggers. You might wonder whether these two films signpost the way to a de-Disneyfication of children’s films, with both Anderson and Jonze exactly the kind of directors to recognise that childhood can be a complex and often traumatic experience. And perhaps this might even be the start of a trend for hip New York directors to film children’s books. What next? Sofia Coppola’s Ballet Shoes, perhaps? On second thoughts…