A look inside Slowhand's [possible] farewell... 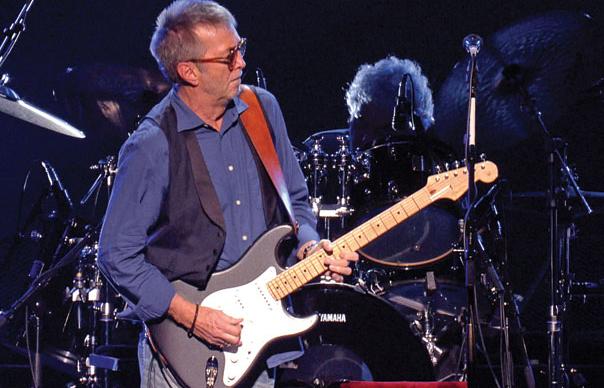 A look inside Slowhand’s [possible] farewell…

“If I don’t do it, I get cravings to come out and do it,” says Eric Clapton at the start of the ungainly-titled but revealing Planes, Trains And Eric. Three or four decades ago, that might have referred to one of several corrosive indulgences, but the only addiction faced now is that of playing music live, amongst a mutually supportive group of players.

Which rather calls into question the rumours, confirmed here by his manager Peter Jackson, that Clapton planned to quit touring when he turned 70. “I’ve been saying this since I was 18 years old,” the guitarist chuckles when asked about retirement. “I retired when I left The Yardbirds – I was out, I wasn’t going to do this anymore.” Back then, his retreat was prompted by purism, by his belief that nobody else wanted to do things his way, that they were more concerned with grasping for the gold ring of pop and fame. But now, he confides, he’s happy enough just rehearsing, without the need to perform. “I get quite resentful about the audiences coming in,” he admits, “because they add a different dynamic.” And there’s the sheer physical demands of touring to contend with: as he revealed to Uncut recently, decades of hefting heavy guitars has given him recurrent back problems, which place limitations on his playing ability – and he’s the kind of perfectionist that wouldn’t want to perform below his peak.

Accordingly, as Eric grew nearer his planned cut-off date, Jackson asked him to decide where in the world he would most prefer to play, given that the next tour could well be his last. Clapton was unequivocal: Japan. It has, he explains, always been his favourite tour stop, a “spiritual place” with kind, accommodating people and an aesthetic sensibility that appeals strongly to his interest in design. He likes the food, he likes the creative stimulation, he likes the way that the Japanese can be attentive without being overbearing – he marvels, for instance, at the way nobody bumps into you when you walk down the street, everybody giving everybody else their personal space. At one point, reflecting upon his friendship with his long-time Japanese promoter Mr. Udo, Clapton muses upon the shared honour systems of British and Japanese culture, our chivalric code paralleled by the Japanese code of bushido.

Which is why this possibly final tour documentary tracks the guitarist across the Far East, lingering longest in the Land of the Rising Sun, with concert footage interspersed with band and associate interviews and backstage footage. His band for this jaunt is as top-drawer as you’d expect: Steve Gadd on drums, Nathan East on bass, Chris Stainton on piano, Paul Carrack on organ and vocals, and Michelle John and Shar White on backing vocals – a resilient outfit capable of accommodating whatever turns a song might take, allowing the guitarist to give free rein to his muse. The Layla highlight “Tell The Truth” is a relaxed, funky gospel-rock throwback on which Stainton’s presence strengthens memories of a time when Clapton played alongside the likes of Leon Russell and Delaney & Bonnie. “Crossroads” is similarly unhurried, with Eric’s vocal echoed soulfully by the backing singers, and compact solos from Stainton, Carrack and Clapton. And Charles Brown’s “Driftin'” is beautifully played on a gorgeous blue acoustic with a lustrous tone, the camera going in close on Clapton’s fingering as he delicately wrests quiet emotion from its strings.

The guitarist’s long association with Japan is confirmed when he is presented with a guitar-shaped crystal award backstage at the Budokan, marking that night’s show as Clapton’s 200th Japanese concert. Mr. Udo gives a little speech, and in return, Eric thanks him for his enduring friendship, even when he was being a bad boy. “I think you had to work hard to be a bad boy too,” he smiles, recalling a fishing trip the pair had made decades ago. That night, the show includes an elegant version of Robert Johnson‘s “Little Queen Of Spades” featuring a coruscating Clapton solo, and an acoustic “Layla” prefaced by an extemporised lower-string preamble. Later on, returning from Japan, he reveals that whilst there he was stricken with some virus and had to be treated with antibiotics. It’s another reminder of the depradations of age and health that have prompted serious thoughts of retirement. As Clapton admits, he would hate to be taken seriously ill thousands of miles from his home and family.

On the homeward leg of the tour, the band stops off to play shows in Dubai and Bahrain, the latter arising from Clapton’s friendship with Crown Prince Salman. It’s a revealing glimpse of the rarefied world that the superstar guitarist inhabits, compared to lesser mortals – including his sidemen, whose regrets at EC’s looming retirement are invariably accompanied by observations that they are in no condition to do likewise. Eric and Salman apparently first met at one of Jackie Stewart’s shoots (guns, not films), and just as Stewart had persuaded the Crown Prince to build an F1 racing circuit to host Grands Prix, so Clapton suggested that he should erect an auditorium for the guitarist to perform in. Salman’s generosity, it transpires, goes even further: he’s had Clapton’s Japanese personal assistant Aki secretly flown over with Eric’s favourite chef and three cases of special meats and mushrooms, to re-create the Teppanyaki Grill backstage. It’s great to be the king, eh?
Andy Gill